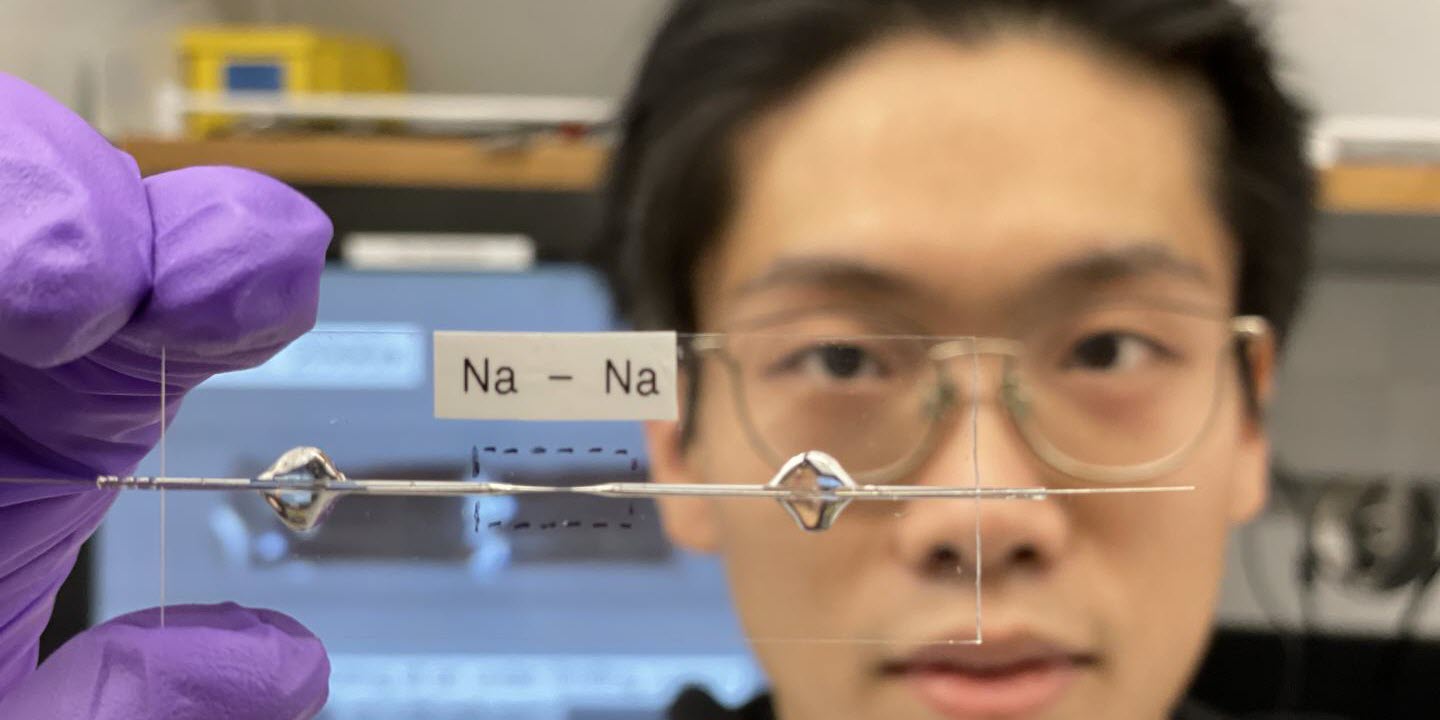 Bingyuan Ma holding a transparent capillary cell. Bai's Lab at the McKelvey School of Engineering is the only one in the world with such diagnostic cells.
Peng Bai Lab

When it comes to batteries, lithium-ion are the best we have as far as energy density and convenience.

The Washington University in St. Louis lab of Peng Bai, assistant professor in the Department of Energy, Environmental & Chemical Engineering in the McKelvey School of Engineering, has developed a stable sodium ion battery that is highly efficient, will be less expensive to make and is significantly smaller than a traditional lithium ion battery due to the elimination of a once-necessary feature.

"We've found that the minimal is maximum," Bai said. "No anode is the best anode."

The research was published May 3, 2021, in the journal Advanced Science.

A traditional lithium ion battery consists of a cathode and anode, both of which store lithium ions; a separator to keep the electrodes separated on either side; and an electrolyte— the liquid through which the ions move. When lithium flows from the anode to the cathode, free electrons leave through the current collector to the device being powered while the lithium passes the separator to the cathode.

To charge, the process is reversed, and the lithium passes from the cathode, through the separator, to the anode.

The concept of replacing lithium with sodium and doing away with the anode isn't new.

"We used old chemistry," Bai said. "But the problem has been, with this well-known chemistry, no one ever showed this anode-free battery can have a reasonable lifetime. They always fail very quickly or have a very low capacity or require special processing of the current collector."

Anode-free batteries tend to be unstable, growing dendrites—finger-like growths that can cause a battery to short or simply to degrade quickly. This conventionally has been attributed to the reactivity of the alkali metals involved, in this case, sodium.

In this newly designed battery, only a thin layer of copper foil was used on the anode side as the current collector, i.e., the battery has no active anode material. Instead of flowing to an anode where they sit until time to move back to the cathode, in the anode-free battery the ions are transformed into a metal. First, they plate themselves onto copper foil, then they dissolve away when it's time to return to the cathode.

"In our discovery, there are no dendrites, no finger-like structures," said Bingyuan Ma, the paper's first author and a doctoral student in Bai's lab. The deposit is smooth, with a metal luster. "This kind of growth mode has never been observed for this kind of alkali metal."

"Observing" is key. Bai has developed a unique, transparent capillary cell that offers a new way to look at batteries. Traditionally, when a battery fails, in order to determine what went wrong, a researcher can open it up and take a look. But that after-the-fact kind of observation has limited usefulness.

"All of the battery's instabilities accumulate during the working process," Bai said. "What really matters is instability during the dynamic process, and there's no method to characterize that." Watching Ma's anode-free capillary cell, "We could clearly see that if you don't have good quality control of your electrolyte, you'll see various instabilities," including the formation of dendrites, Bai said.

Essentially, it comes down to how much water is in the electrolyte.

Alkali metals react with water, so the research team brought the water content down. "We were hoping just to see a good performance," Bai said. Watching the battery in action, the researchers shortly saw shiny, smooth deposits of sodium. It's the smoothness of the material that eliminates morphological irregularities that can lead to the growth of dendrites.

"We went back to check the capillary cells and realized there was a longer drying process of the electrolyte," Bai said. Everyone talks about the water content in batteries, but, in previous research, the amount of water had often been relegated to simply a statistic that needed to be noted.

Bai and Ma realized that it was, in fact, the key.

"Water content must be lower than 10 parts-per-million," Bai said. With that realization, Ma was able to build not just a capillary cell, but a working battery that is similar in performance to a standard lithium-ion battery, but takes up much less space because of the lack of an anode.

"We proved you can use the simplest setup to enable the best battery," Bai said.

- This press release was originally published on the Washington University in St. Louis' news website, The Source. It has been edited for style