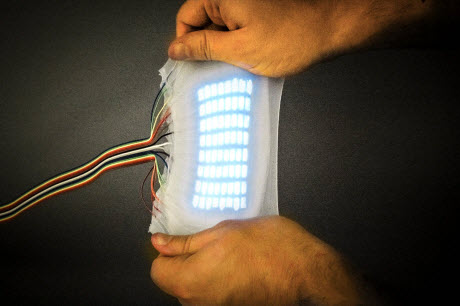 The research group of Rob Shepherd, assistant professor of mechanical and aerospace engineering, has developed a highly stretchable electroluminescent skin capable of stretching to nearly six times its original size while still emitting light. The group’s work is documented in a paper published online March 3 in the journal Science.Photo credit: Chris LarsonA health care robot that displays a patient’s temperature and pulse, and even reacts to a patient’s mood.

An autonomous vehicle with an information display interface that can be changed based on the passenger’s needs.

Even in this age of smartphones and other electronics wonders, these ideas sound quite futuristic. But a team of Cornell University graduate students–led by Rob Shepherd, assistant professor of mechanical and aerospace engineering–has developed an electroluminescent “skin” that stretches to more than six times its original size while still emitting light. The discovery could lead to significant advances in health care, transportation, electronic communication, and other areas.

“This material can stretch with the body of a soft robot, and that’s what our group does,” Shepherd said, noting that the material has two key properties: “It allows robots to change their color, and it also allows displays to change their shape.”

This hyper-elastic light-emitting capacitor (HLEC), which can endure more than twice the strain of previously tested stretchable displays, consists of layers of transparent hydrogel electrodes sandwiching a dielectric (insulating) elastomer sheet. The elastomer changes luminance and capacitance (the ability to store an electrical charge) when stretched, rolled and otherwise deformed.

“We can take these pixels that change color and put them on these robots, and now we have the ability to change their color,” Shepherd said. “Why is that important? For one thing, when robots become more and more a part of our lives, the ability for them to have emotional connection with us will be important. So to be able to change their color in response to mood or the tone of the room we believe is going to be important for human-robot interactions.”

In addition to its ability to emit light under a strain of greater than 480 percent its original size, the group’s HLEC was shown to be capable of being integrated into a soft robotic system. Three six-layer HLEC panels were bound together to form a crawling soft robot, with the top four layers making up the light-up skin and the bottom two the pneumatic actuators.

The chambers were alternately inflated and deflated, with the resulting curvature creating an undulating, “walking” motion.

Shepherd credited a group of four graduate students–Bryan Peele, Chris Larson, Shuo Li and Sanlin Robinson–with coming up with the idea for the material. All but Li were in Shepherd’s Rheology and Processing of Soft Materials class in spring 2014, when the seeds for this discovery were planted.

“They would say something like, ‘OK, we have a single pixel that can stretch 500 percent in length.’ And so I’d say, ‘That’s cool, but what is the application for it?’” Shepherd said. “And that’s the biggest thing–you can have something cool, but you need to find a reason to use it.”

In addition to the four graduate students, all members of the Shepherd Group, contributors included Massimo Tottaro, Lucia Beccai and Barbara Mazzolai of the Italian Institute of Technology’s Center for Micro-BioRobotics, a world leader in robotics study. Shepherd met Beccai and Mazzolai at a conference two years ago; this was their first research collaboration.

The group’s paper, “Highly Stretchable Electroluminescent Skin for Optical Signaling and Tactile Sensing,” was published in the March 3 online edition of the journal Science.

Although Shepherd admitted to “not being very fashion-forward,” another application involves wearable electronics. While wearable technology today involves putting hard electronics onto a soft base (think Apple Watch or Fitbit), this discovery paves the way for devices that fully conform to the wearer’s shape.

The Shepherd Group has also developed a lightweight, stretchable material with the consistency of memory foam, with the potential for use in prosthetic body parts, artificial organs and soft robotics.

The group’s latest work was supported by a grant from the Army Research Office, a 2015 award from the Air Force Office of Scientific Research, and two grants from the National Science Foundation.