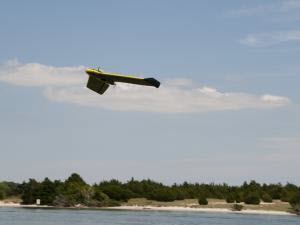 Drones are transforming how we study and learn about the marine environment.Photo courtesy of Duke UniversityThe Marine Conservation Ecology Unmanned Systems Facility is located at the Duke University Marine Laboratory in Beaufort, N.C.

It flew its first operational missions earlier this month to support University of North Carolina researchers who were mapping nesting beaches and at-sea aggregations of endangered olive ridley sea turtles in Costa Rica.

In addition to flying research missions for private and public partners, the new facility will offer courses, starting in summer 2016, to train students and working professionals on how to use unmanned aircraft systems (UAS) in coastal research and conservation.

“Unmanned aircraft systems have the ability to collect large volumes of data from even the most remote or extreme locations. They are transforming how we study and learn about the marine environment,” said David Johnston, executive director of the new facility and assistant professor of the practice of marine conservation ecology at Duke’s Nicholas School of the Environment.

“Given the breadth of marine science expertise concentrated at university and government labs in eastern North Carolina, we believe there is significant opportunity for us to work together and establish our region as a global leader in the development and use of this new technology for research,” Johnston said.

Drones can be used for a wide array of difficult or dangerous research and conservation jobs, he said. These include identifying and analyzing marine debris in remote locations; monitoring protected and endangered species and their habitats; assessing fisheries stocks; monitoring the effects of climate change, coastal erosion and sea-level rise; and supporting emergency responses to marine animal entanglements or strandings, and other marine crises. 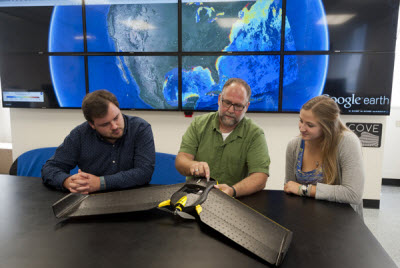 Students Logan Palin and Lauren Arona learn about the components of a fixed-wing unmanned aircraft system (UAS) and how to install batteries and camera payloads.Photo credit: Scott TaylorSkills covered in the course will include flight planning, mission execution, data management and analysis, and an overview of federal and state airspace restrictions and rules. Students may be given the chance to build and fly their own unmanned aircraft systems. “Building their own systems will greatly enhance students’ ability to fly safe and efficient missions,” said Julian Dale, the lead engineer of the new facility. “It’s important to understand the components of these systems and how they work together.”

Johnston, Newton and Dale established the new facility at the Duke Marine Lab following eight months of safety and operational training using unmanned aircraft systems for coastal and marine research in eastern North Carolina, Florida, Nova Scotia and Hawaii. They have partnered with senseFly, a Swiss firm that designs and builds commercial drones for research and mapping, to provide the facility with access to the latest UAS technologies and platforms.

“We achieved initial operational capacity earlier this month and anticipate being awarded our FAA Section 333 exemption in coming weeks. This will allow us to conduct commercial unmanned aircraft system flights and should help facilitate plans for a number of exciting projects we’re working on with local partners, including mapping local estuarine reserves and estimating sea turtle density at Cape Lookout,” Johnston said.

The launching of the new facility comes just one month after more than 50 experts from federal, state and local government, academia, industry and civic groups met at the Marine Lab for a workshop on the use of autonomous technology in marine science. One of the chief recommendations from the workshop was the need for a facility to coordinate and promote the use of the technology for regional and global marine research and conservation.

To learn more about the new facility, go here.

The Duke Marine Lab is part of Duke’s Nicholas School of the Environment.