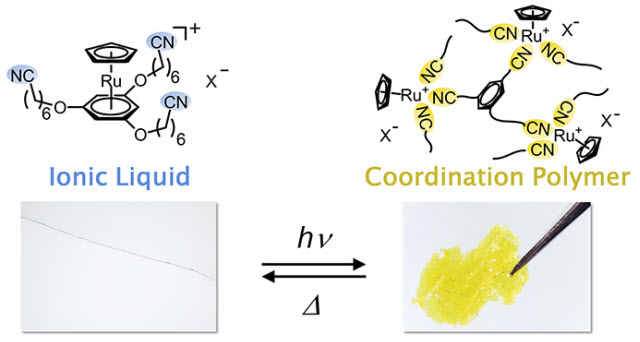 The chemical structure (above) and appearance (below) of the ionic liquid and coordination polymer. The ionic liquid is clear and colorless, but when exposed to ultraviolet light, the bonds between ruthenium and benzene rings are dissociated and replaced by a structure in which cyano groups link with the ruthenium ions, transforming it into a yellow solid. This solid reverts to the original liquid when exposed to heat.Images courtesy of Kobe University

A research group led by Professor Mochida Tomoyuki (Kobe University Graduate School of Science) and Dr. Funasako Yusuke (Tokyo University of Science, Yamaguchi) has developed a metal-containing compound which transforms into a solid when exposed to light and returns to liquid form when heated. This substance could potentially be used for photolithography technology, such as fabricating printed circuits, among other applications. The findings were published in the journal Chemical Communications on May 7, 2016 (Japan Standard Time).

Techniques that can control the properties of materials through external stimuli such as light and heat are extremely important in creating materials for use in electronics. For example, materials which solidify when exposed to light (photosensitive resins) are used in creating printed circuits, but it is difficult to reuse these materials.

Professor Mochida’s research group proposed that if they could control the binding process between metal ions and organic molecules using heat and light, they could create a material that drastically changes its properties when exposed to external stimuli. The group became the first in the world to develop an ionic liquid from a ruthenium complex with cyano groups. This liquid is colorless, clear, non-volatile, and does not freeze even at -50?. If you apply ultraviolet light to the liquid for a few hours, it changes into an amorphous coordination polymer, and if you heat this solid for one minute at 130?, it returns to its original ionic liquid form.

In this way, by applying light and heat, the group realized a reversible transformation between an ionic liquid and a solid coordination polymer—two substances with completely different structures and different chemical properties.

This research has led to the successful creation of a reusable photocurable liquid. It can potentially be applied to printed circuit boards, 3D printing, and adhesives. Professor Mochida comments, “We plan to continue research on the molecular design of this substance, to reduce its response time, and look into creating more functions for this coordination polymer.”