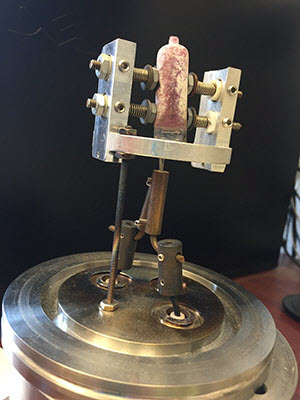 Physics professor David McIlroy will receive $408,000 over three years to study the fundamental science behind an explosives sensor he developed with a previous Department of Defense grant. The sensor incorporates nanosprings—telephone-cord shaped coils of silica 500 times thinner than a human hair—which McIlroy invented.

McIlroy’s new project will focus on defining and understanding the underlying factors that make the sensor work, which opens the door to designing a more robust and reliable sensor. He will work with two graduate students and two undergraduate summer researchers.

“My approach is, let’s take advantage of certain traits we see, and if we can bring those to the forefront, see if they give us better sensing properties,” McIlroy says.

McIlroy’s sensor design uses xenon light bulbs—which cost just a few dollars and are commonly used in items such as overhead projectors—coated with nanosprings and a material that reacts with certain chemicals used to make explosives. The bulb provides heat to activate the reactive material, while the nanosprings provide a huge amount of surface area in a small space, allowing the sensor to react to extremely low concentrations of chemicals.

The sensor is small, which would allow it to be mounted on a Humvee headlight or “bomb-sniffing” robot, and inexpensive to make.

“This is a really practical application of nanotechnology, and low-cost,” McIlroy said. “We’re taking what normally you’d think is really expensive to do and using stuff you can buy at Wal-Mart to build a sensor.”