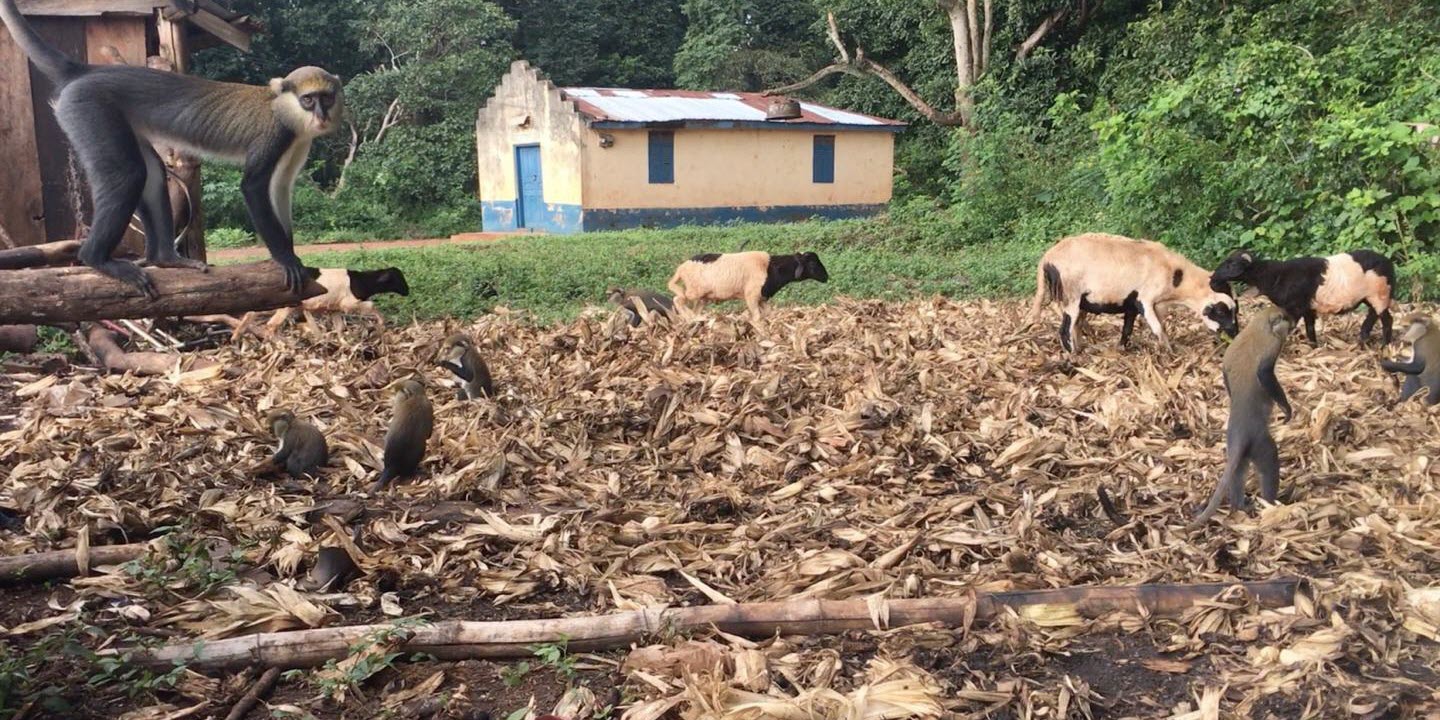 Primates and livestock explore the grounds outside a residence in Ghana.
Terra Kelly, UC Davis

SARS-CoV-2 showed the world with devastating clarity the threat undetected viruses can pose to global public health. SpillOver, a new web application developed by scientists at the University of California, Davis, and contributed to by experts from all over the world, ranks the risk of wildlife-to-human spillover for newly-discovered viruses.

SpillOver is the first open-source risk assessment tool that evaluates wildlife viruses to estimate their zoonotic spillover and pandemic potential. It effectively creates a watchlist of newly-discovered viruses to help policymakers and health scientists prioritize them for further characterization, surveillance, and risk-reducing interventions.

The tool is linked to a study published in the journal PNAS, in which the authors identified the most relevant viral, host and environmental risk factors for virus spillover. Then the team ranked the risk from 887 wildlife viruses using data collected from a variety of sources, including viruses detected by the USAID Emerging Pandemic Threats PREDICT project, which UC Davis' One Health Institute led from 2009 to 2020.

Topping the list were 12 known human pathogens, which was expected and validates the tool's utility. Interestingly, SpillOver ranked several newly-discovered coronaviruses as higher risk for spillover than some viruses already known to be zoonotic. This watchlist includes a novel coronavirus provisionally named PREDICT_CoV-35, which ranked within the top 20.

The power of the tool lies in the fact that it is open-source—the more data entered, the more robust the ranking. SARS CoV-2 currently ranks second out of the 887 viruses analyzed, between Lassa and Ebola viruses.

That may seem counterintuitive, the authors note, given the pandemic's current global devastation. They explain that the tool is ranking the potential for another spillover beyond what has happened historically. In addition, key information remains undiscovered about SARS CoV-2 and its spillover risk, such as the number and range of its host species. As scientists learn more about this virus, it is possible SARS CoV-2 will move to No. 1.

"SARS-CoV-2 is just one example of many thousands of viruses out there that have the potential to spillover from animals to humans," said lead author Zoë Grange, who led the development of SpillOver as a postdoctoral researcher with the UC Davis One Health Institute. "We need to not only identify but also prioritize viral threats with the greatest spillover risk before another devastating pandemic happens. Our SpillOver Viral Risk Ranking tool is the starting point for building proactive solutions."

SpillOver was inspired by risk assessments used by banks and insurance companies. It creates a "credit-like" score for viruses by looking at key risk factors and using them to prioritize those viruses posing the greatest potential threats to human health for a watchlist. Users can customize the watchlist to their own circumstances, such as country of interest.

Previous virus-ranking tools have been limited in the number or types of viruses analyzed, with minimal risk factors considered. SpillOver considers 32 risk factors about the virus and hosts, including associated environment and human behaviors. It also includes 25 different viral families, from coronaviruses to the viral family that causes ebolaviruses.

SpillOver produces a detailed risk report for each virus, and its 'Risk Comparison' tool allows users to compare and contrast ranked viruses, as well as filter viruses on a selection of key attributes, including virus species, host species and country of detection.

As an open-source tool, SpillOver provides a living platform for ongoing ranking of spillover risk. Scientists can contribute data to existing viruses or assess risk of new viruses using the 'Rank Your Virus' application.

"This tool is intended to start a global conversation that will allow us to go far beyond how we thought about ranking viruses in the past and allow real-time scientific collaboration to identify new threats early," said corresponding author Jonna Mazet, a professor at the UC Davis School of Veterinary Medicine, founding director of the One Health Institute and former global director of PREDICT. "SpillOver can help advance our understanding of viral health threats and enable us to act to reduce the risk of spillover before pandemics can catch fire."

SpillOver engages and enables scientists who are discovering viruses to collaborate in a One Health framework that is focused not only on viral characteristics but also on all of the circumstances present at high-risk areas for disease emergence. This allows the tool to be a catalyst for rapidly identifying and ranking newly-discovered viruses and their animal-human transmission interfaces.

- This press release was originally published on the UC Davis website. It has been edited for style