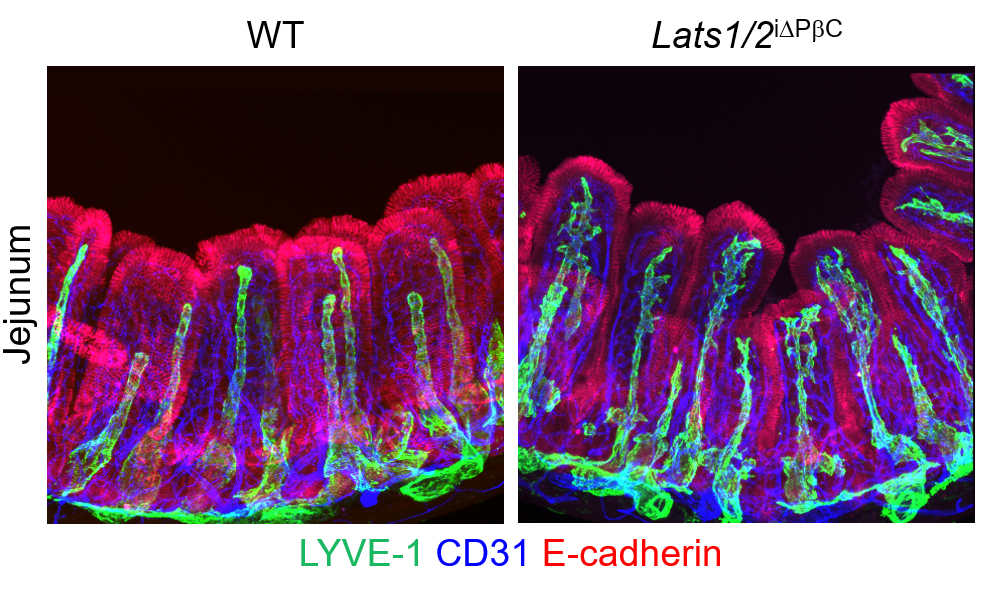 Lacteals (in green) are shown in normal conditions (left) and with YAP/TAZ hyperactivation (right).
IBS

You have just enjoyed a delicious summer BBQ. After approximately eight hours, food molecules reach your small intestine, where specialized lymph capillaries, called lacteals, absorb fat nutrients. Lacteals are different from other lymphatics, as they continue to regenerate during adulthood, with a slow, but steady pace. Their unique renewal capacity is still poorly understood.

A team of scientists led by Gou Young Koh at the Center for Vascular Research, within the Institute for Basic Science (IBS, South Korea) have identified new subsets of gut connective cells, which are crucial for lymphatic growth. Their new findings have been reported in the journal Nature Communications.

The walls of the small intestine are covered with fingerlike projections, called villi. Lining these villi, heterogeneous populations of epithelial, immune, vascular, connective, and even neural cells co-exist and help the digestive process. Lacteals and blood capillaries run inside the villi and take in different food molecules. The gut environment needs to cope with water secretion and reabsorption (osmotic stress), as well as the repetitive muscular activity that moves food through the intestine. How all these complex mechanisms are harmonized is still a mystery. 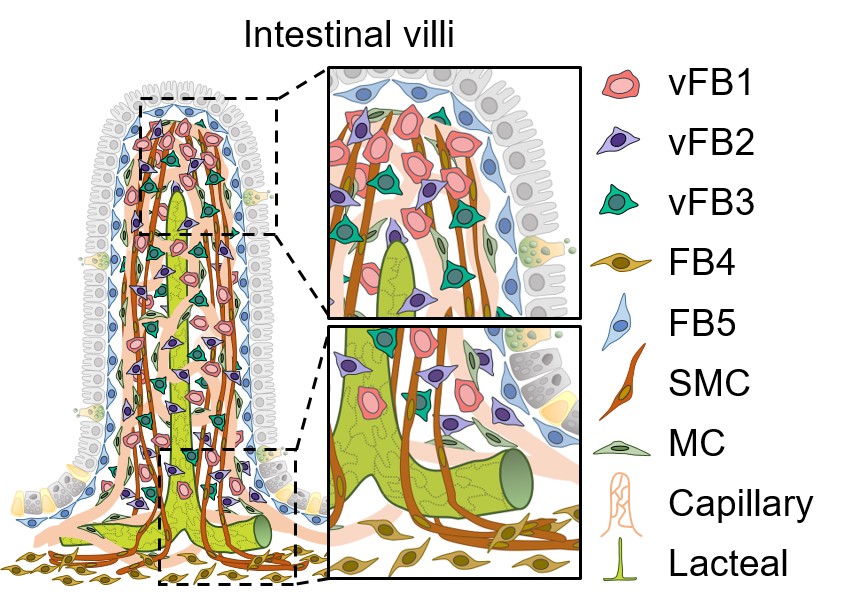 The image shows fingerlike projections that cover the intestinal wall and absorb nutrients in the small intestine. During digestion, hydrophilic nutrients, such as glucose and amino acids, are absorbed by blood capillaries. On the other hand, hydrophobic nutrients, such as lipids, are taken in by specialized lymphatic capillaries called lacteals. The graphics also shows five types of connective cells (vFB1, vFB2, vFB3, FB4, and FB5), three of which were identified in this study, as well as smooth muscle cells (SMC), mural cells (MC), blood and lymph capillaries (lacteals).
IBS

The research team was able to place a new piece towards completing this mysterious puzzle. The researchers found that the regulatory proteins YAP/TAZ in villi's connective cells, the intestinal stromal cells, play a role in the growth of nearby lacteals. In mice with an abnormal hyperactivation of YAP/TAZ, the team observed atypical sprouting of lacteals and impaired dietary fat uptake.

"The lacteals in these mice looked like tridents, which is very intriguing, since we did not manipulate the lacteals themselves, but the surrounding cells," says Seon Pyo Hong, first co-author of this study. 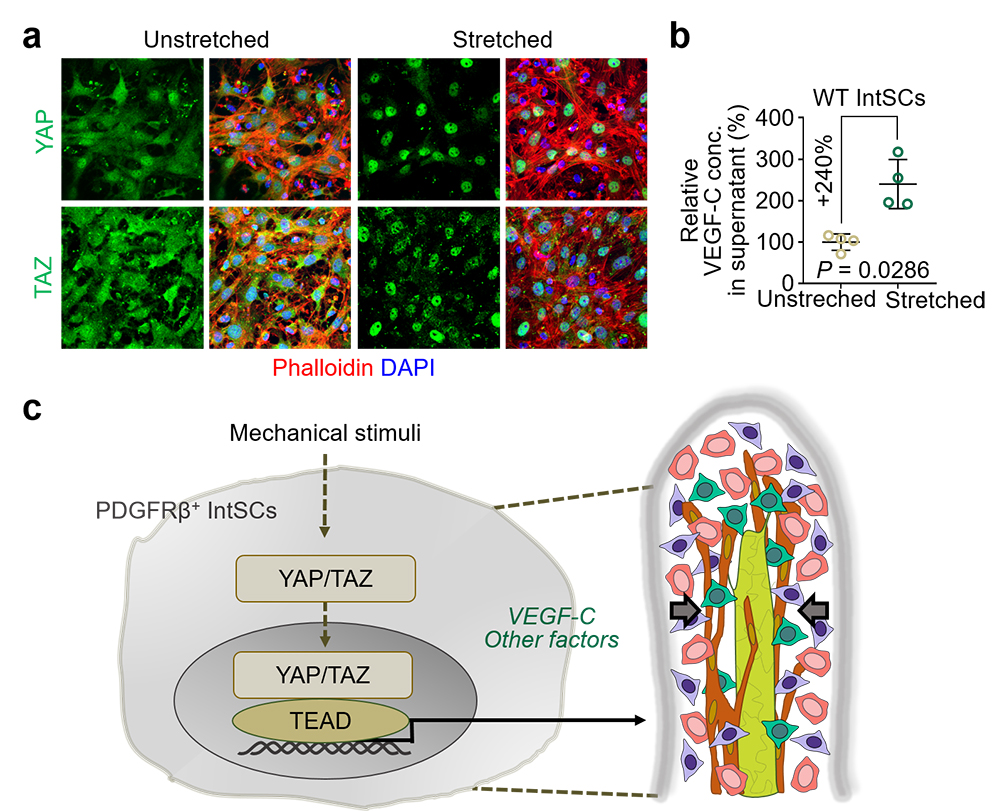 The researchers took a step further and discovered that intestinal stromal cells belong to several subtypes, with distinct gene expression and localizations within the villi. Among these subsets, three newly identified populations secrete VEGF-C—an essential molecule for lymphatic growth—upon YAP/TAZ activation. Myung Jin Yang, first co-author of this study, explains, "We were very surprised to see such heterogeneity in a cell population that was considered homogeneous."

Lastly, researchers showed that mechanical force and osmotic stress regulate YAP/TAZ activity in stromal cells. In summary, mechanical stimulation activates YAP/TAZ in the intestinal stromal cells, which in turn release VEGF-C and can account for lacteal growth. Hyunsoo Cho, first co-author of this study notes, "This result implies a crucial link between the physiology of intestinal environment and biological interactions between cell types."

"We are interested in investigating how each newly identified cell type works in healthy and diseased conditions," adds Koh.

- This press release was originally published on the IBS website