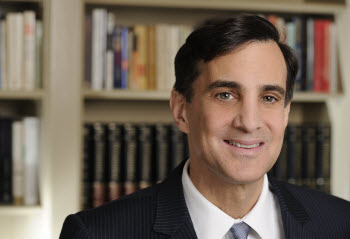 Ronald J. Daniels.Johns Hopkins UniversityThe article, which appears in the online Early Edition of the journalProceedings of the National Academy of Sciences, illustrates how for more than a generation, grants for young scientists have declined.

The number of principal investigators with a leading National Institutes of Health grant who are 36 years old or younger dropped from 18 percent in 1983 to 3 percent in 2010. Meanwhile, the average age when a scientist with a medical degree gets her first of these grants has risen from just under 38 years old in 1980 to more than 45 in 2013.

“The implications of these data for our young scientists are arresting,” Daniels writes in the PNAS paper. “Without their own funding, young researchers are prevented from starting their own laboratories, pursuing their own research, and advancing their own careers in academic science. It is not surprising that many of our youngest minds are choosing to leave their positions.”

If young talent continues to leave academia, Daniels says it could lead to a gradual evaporation of new discoveries, the loss of future leaders and mentors, a less diverse workforce and the loss of scientists at what should be a pivotal point in their career.

Daniels points to three reasons for the decline in research funding for young scientists — longer training periods, a grant system that may favor incumbents and an increase in the cost of research that is borne by universities, causing some institutions to shy away from unproven researchers in favor of scientists with established funding streams.

“The inability to staunch — if not reverse — the above trends stands as an urgent and compelling policy challenge,” Daniels says. “The current stewards of the U.S. research enterprise bear a responsibility to sustain and safeguard that enterprise so that it can provide a platform for the scientists and the science of generations to come.”

Daniels proposes several policy reforms to better support young scientists including more robust funding for the NIH — with more of that money dedicated to new talent; and refining the peer review model to create a more accepting environment for inexperienced scientists and daring proposals. He also suggests the creation of a standing body to undertake a continuing review of the issue, assess the effectiveness of any interventions and press stakeholders — Congress, the NIH, federal agencies, universities and private industry — into action.