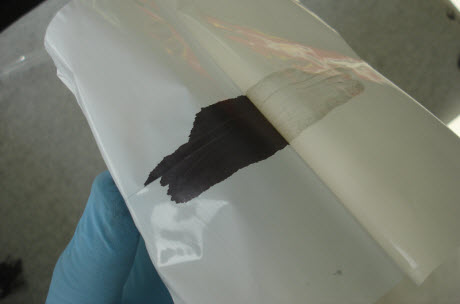 MXene clay, made by researchers at Drexel University, can be rolled to any thickness while retaining its highly conductive properties. This new material could find uses in energy storage devices like batteries and supercapacitors.Drexel UniversityWith the publication of their recipe for “conductive MXene clay” in the Dec. 4 edition of Nature, the researchers suggest a significant shift in the way electrodes for storage devices are produced.

The clay, which already exhibits conductivity on par with that of metals, can be turned into a film—usable in an electrode—simply by rolling or pressing it.

“Both the physical properties of the clay, consisting of two-dimensional titanium carbide particles, as well as its performance characteristics, seem to make it an exceptionally viable candidate for use in energy storage devices like batteries and supercapacitors,” said Yury Gogotsi, PhD, Distinguished University and Trustee Chair professor in the College of Engineering, and director of the A.J. Drexel Nanomaterials Institute, who is a co-author of the paper. “The procedure to make the clay also uses much safer, readily available ingredients than the ones we used to produce MXene electrodes in the past.”

The key to the utility of this material, according to Michel Barsoum, PhD, Distinguished professor in the College of Engineering and one of the inventors of MXenes, is in its form.

“As anybody who has played with mud can attest, clay is hydrophilic –water-loving,” Barsoum said. “Clay is also layered and when hydrated, the water molecules slide between the layers and render it plastic that in turn can be readily shaped into complex shapes. The same happens here; when we add water to MXene, water penetrates between the layers and endows the resulting material with plasticity and moldability. Graphene—a material widely studied for use in electrodes- on the other hand, is conductive but does not like water—it is hydrophobic. What we discovered is a conductive two-dimensional layered material that also loves water. The fact that we can now roll our electrodes rapidly and efficiently, and not have to use binders and/or conductive additives renders this material quite attractive from a mass production point of view.”

The discovery came about while Michael Ghidiu, a doctoral student advised by Barsoum and Gogotsi in the Department of Materials Science and Engineering at Drexel, was testing a new method for making MXenes—two-dimensional materials invented at Drexel that are among the leading candidates for use in next-generation batteries and supercapacitors.

Straying slightly from the original chemical etching process pioneered at Drexel, which uses highly toxic hydrofluoric acid, Ghidiu instead used a fluoride salt and hydrochloric acid to etch aluminum out of a titanium-based, layered ceramic material called a MAX phase—also discovered at Drexel by Barsoum. These two ingredients, which are household names in chemistry class and are also much safer to handle than hydrofluoric acid, reduced the MAX phase to a pile of black particles. To stop the reaction and remove any residual chemicals, Ghidiu washed the material in water. But rather than finding the familiar layered MXene particles, he discovered that the etched sediment absorbed the water to form a clay-like material.

“We expected to find a slightly different material coming from the new process—but nothing like this,” Ghidiu said. “We were just hoping for a safer, less expensive way to make MXenes, when something even better landed on the table.”

One of the first tests the team performed on the clay was to see if it could be pressed into a thin layer while retaining its conductive properties—after all, its initial goal was to make a conductive film.

“Being able to roll clay into a film is quite a contrast in production time, safety and cost when compared to the two most common practices for making electrode materials,” Ghidiu said. “Both the etching and peeling process used to make MXenes and a flaking, filtration and deposition method—like paper making—employ strong acids and costly, less common materials. The clay-making process is much simpler, quicker and safer.”

With the new discovery, all these steps are avoided, greatly simplifying the processing. Now the researchers can simply etch the MAX phase, wash the resulting material and roll the resultant clay into films of various thicknesses. 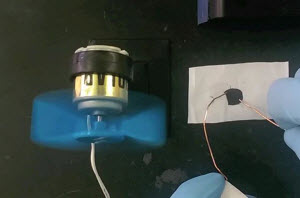 Thorough investigation of the clay’s electrochemical performance indicated that the clay’s ability to store an electrical charge is three times that reported for MXenes produced by hydrofluoric acid etching.Drexel University“I would say the most important benefit to the new method—besides its increased capacitance—is that we can now make an electrode ready-to-go in about 15 minutes, whereas the total process before from the same starting point would be on the order of a day,” Ghidiu said.

The availability of its ingredients also makes the clay rather appealing from a production standpoint.

“Being able to make a conductive clay, essentially out of titanium carbide with the help of a common fluoride salt and hydrochloric acid is the materials equivalent of making a chocolate chip cookie—everybody has these ingredients in the pantry,” said Barsoum.

But a question that resounds through most materials research of this nature is, of course: what can it do with an electrical charge?

Thorough investigation of the clay’s electrochemical performance, conducted by Maria Lukatskaya a doctoral student advised by Gogotsi and Barsoum, which was reported in the paper, indicated that the clay’s ability to store an electrical charge is three times that reported for MXenes produced by hydrofluoric acid etching. This means it could find uses in the batteries that power cell phones and start cars, or even in a supercapacitor that could one day help renewable energy sources fit into a regional power grid.

“Keep in mind this is the very first generation of the material that we’re testing,” Lukatskaya said. “We haven’t done a thing to augment its abilities, and at 900 F/cm3 it’s already showing a higher capacitance per unit of volume than most other materials. We’re also reporting that it does not lose any of its capacitance through more than 10,000 charge/discharge cycles, so we’re talking about quite a special lump of clay here.”

Changing materials scientists’ medium from film to clay presents a variety of new avenues for research and manufacturing. The clay can be molded into any shape. It could also be watered down into a conductive paint that hardens within a few minutes while still retaining its conductive properties. This means it could have applications in batteries, conductive transparent coatings and reinforcement for composites among others. 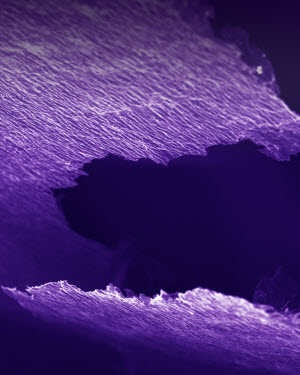 An electron microscope image of the clay.Drexel UniversityAn electron microscopic study of the clay particles dispersed in water, conducted by co-author Mengqiang Zhao, PhD, a post-doctoral researcher in Gogotsi’s group, showed that the clay is made up of single layers of MXene about one nanometer—just a few atoms—thick. This atomically thin structure indicates that researchers are likely to find that the clay has many attractive electronic and optical properties as they continue to learn more about it.

“We plan to keep pushing forward with our study of this new material in hopes of developing a truly scalable manufacturing process, improving quality and yield of MXene and exfoliating other MAX phases to produce new MXenes, which could not be synthesized using the previously used process—the possibilities seem endless. While it might look like just a bit of clay, I believe this discovery will reshape research in the field going forward.” Barsoum said.

This work was supported by the Ceramics Program of the National Science Foundation and by the U.S. Department of Energy’s FIRST Energy Frontier Research Center.