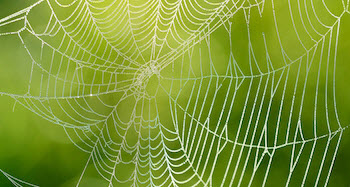 A paper in Nature Materials looks at the microscopic structure of spider silk and reveals unique characteristics in the way it transmits phonons, quasiparticles of sound.

The research shows for the first time that spider silk has a phonon band gap. That means it can block phonon waves in certain frequencies in the same way an electronic band gap—the basic property of semiconducting materials—allows some electrons to pass and stops others.

The researchers wrote that their observation is the first discovery of a “hypersonic phononic band gap in a biological material.”

How the spider uses this property remains to be understood, but there are clear implications for materials, according to materials scientist and Rice Engineering dean Edwin Thomas, who co-authored the paper. He suggested that the crystalline microstructure of spider silk might be replicated in other polymers. That could enable tunable, dynamic metamaterials like phonon waveguides and novel sound or thermal insulation, since heat propagates through solids via phonons.

“Phonons are mechanical waves,” Thomas said, “and if a material has regions of different elastic modulus and density, then the waves sense that and do what waves do: They scatter. The details of the scattering depend on the arrangement and mechanical couplings of the different regions within the material that they’re scattering from.”

Spiders are adept at sending and reading vibrations in a web, using them to locate defects and to know when “food” comes calling. Accordingly, the silk has the ability to transmit a wide range of sounds that scientists think the spider can interpret in various ways. But the researchers found silk also has the ability to dampen some sound.

“(Spider) silk has a lot of different, interesting microstructures, and our group found we could control the position of the band gap by changing the strain in the silk fiber,” Thomas said. “There’s a range of frequencies that are not allowed to propagate. If you broadcast sound at a particular frequency, it won’t go into the material.”

Edwin “Ned” ThomasPhoto courtesy of Rice UniversityIn 2005, Thomas teamed with George Fytas, a materials scientist at the University of Crete and the Institute of Electronic Structure and Laser Foundation for Research and Technology-Hellas, Greece, on a project to define the properties of hypersonic phononic crystals. In that work, the researchers measured phonon propagation and detected band gaps in synthetic polymer crystals aligned at regular intervals.

“Phononic crystals give you the ability to manipulate sound waves, and if you get sound small enough and at high enough frequencies, you’re talking about heat,” Thomas said. “Being able to make heat flow this way and not that way, or make it so it can’t flow at all, means you’re turning a material into a thermal insulator that wasn’t one before.”

Fytas and Thomas decided to take a more detailed look at dragline silk, which spiders use to construct a web’s outer rim and spokes and as a lifeline. (A spider suspended in midair is clinging to a dragline.) Though silk has been studied for thousands of years, it has only recently been analyzed for its acoustic properties.

Silk is a hierarchical structure comprised of a protein, which folds into sheets and forms crystals. These hard protein crystals are interconnected by softer, amorphous chains, Thomas said. Stretching or relaxing the interconnecting chains changes the silk’s acoustic properties by adjusting the mechanical coupling between the crystals.

Fytas’ team at the Max Planck Institute for Polymer Research in Mainz, Germany, performed Brillouin light scattering experiments to test silk placed under varying degrees of stress. “That was George’s genius,” Thomas said. “With Brillouin scattering, you use light to create phonons as well as absorb them from the sample. BLS allows you to see how the phonons move around inside any object, depending on the temperature and the material’s microstructure.” 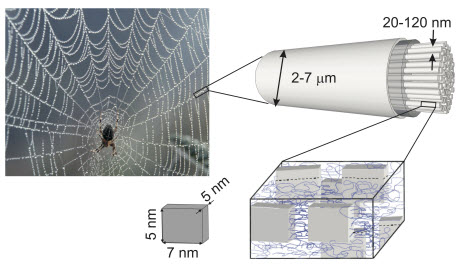 Scientists at Rice University and in Europe and Singapore studied the microstructure of spider silk to see how it transmits phonons, quanta of sound that also have thermal properties. They suggested what they learned could be useful to create strong synthetic fibers with silk-like properties. Click on the image for a larger version.Illustration credit: Dirk SchneiderThey found that when silk was “super contracted,” the velocity of phonons decreased by 15 percent while the bandwidth of frequencies it could block increased by 31 percent. Conversely, when strained, the velocity increased by about 27 percent, while the bandwidth decreased by 33 percent. They first observed a band gap in native (uncontracted) silk at about 14.8 gigahertz, with a width of about 5.2 gigahertz.

Just as interesting to the team was the “unique region of negative group velocity” they witnessed. At these conditions, even though phonon waves moved forward, the phase velocity moved backward, Thomas said. They suggested the effect may allow for the focusing of hypersonic phonons.

“Right now, we don’t know how to do any of this in other macromolecular fiber materials,” Thomas said. “There’s been a fair amount of investigation on synthetic polymers like nylon, but nobody’s ever found a band gap.”

Co-authors of the paper are Dirk Schneider of ebeam Technologies, Bern, Switzerland, and Nikolaos Gomopoulos of the Swiss Federal Institute of Technology in Lausanne, both formerly of the Max Planck Institute; Cheong Koh of DSO National Laboratories, Singapore; Periklis Papadopoulos of the Planck Institute and the University of Ioannina, Greece; and Friedrich Kremer of the Institute of Experimental Physics at the University of Leipzig, Germany. Fytas is a professor at the University of Crete and has an appointment at the Planck Institute. Thomas is the William and Stephanie Sick Dean of Rice’s George R. Brown School of Engineering, a professor of materials science and nanoengineering and of chemical and biomolecular engineering.

The Aristeia Alliance of the Mediterranean Institute for Scientific Research, the European Research Council, the Sonderforschungsbereich/Transregio (Collaborative Research Center), and the Deutsch Forschungsgemeinschaft (German Research Foundation) supported the research.