May 19, 2015National Institute of Standards and Technology 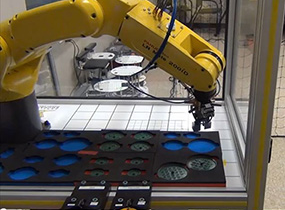 Photo credit: NISTCrafted by a working group of 166 experts from 23 nations, the IEEE Standard for Ontologies for Robotics and Automation (IEEE P1872) is designed to simplify programming, extend the informationprocessing and reasoning capabilities of robots, and enable clear robot-to-robot and human-to-robot communication.

“As technology advances, robots are growing in their capabilities and, someday, may become jacks of many—if not all—trades,” explains NIST engineer Craig Schlenoff, who chairs the IEEE working group that developed the standard. “They will work collaboratively with other robots and with humans. So, there will be—and, in fact, there already is—a need for clear, unambiguous communication.”

The working group’s core ontology for robotics and automation, or CORA, is an important step toward achieving this shared understanding. It establishes a formal way of representing knowledge that robots possess to perform tasks in their particular area of activity such as manufacturing plants or hospitals. This “common ground” enables efficient and reliable exchanges of information and integration of new data.

Artificial intelligence and information technology researchers borrowed the notion of ontology from the field of philosophy, where it denotes the study of things that exist and how they are grouped and related to each other. Applied to robotics and automation, an ontology specifies key concepts, properties, relationships and self-evident truths—or axioms—in a particular domain of activity. All of this job-relevant knowledge can be rendered in a computer-interpretable format so that software can reason through new information.

With this structured base of knowledge, a manufacturing robot, for example, will know what tasks it can do, how much it can lift, whether it can work around people, and other performance-defining features. So when a new order comes, the robot will be able to assess whether it can do the required work.

The new standard is a starting point. It defines what a robot is in the scope of the standard, defines common concepts, and provides an organizational framework for succeeding efforts to develop for specific classes of robots.

Next week, at ICRA 2015, a conference organized by IEEE’s Robotics and Automation Society, the working group will launch its effort to develop an ontology specific to industrial robots, focusing initially on assembly tasks. At the Seattle, Wash., meeting, Schlenoff and his colleagues also will announce the release of a NIST-developed messaging language for sending commands to robots and for receiving status reports from the machines. It will be proposed as a standard for the group working on industrial robots.

During the conference, IEEE will recognize Schlenoff and key members of the working group with an award for their leadership during the development of the standard.