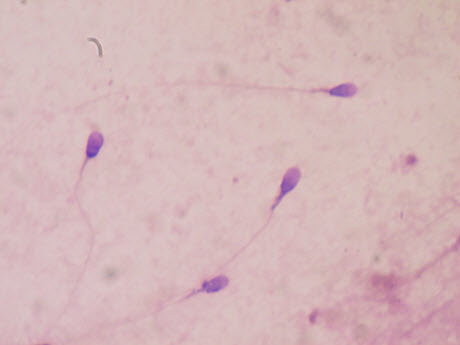 National University of Singapore researchers have made surprising findings about hydrogen sulphide’s effect on male infertility.Image credit: Bobjgalindo, Wikimedia CommonsHydrogen sulphide, a gas known for its rotten egg smell, may be able to help men improve the quality of their sperm and thus their fertility, if a National University of Singapore (NUS) study on animals is translatable to humans. Published in the journal Nitric Oxide, the new findings can potentially give rise to new approaches in treating male infertility.

The stinky gas, which is produced naturally in small quantities by the body, protects the heart, brain, and cells due to its antioxidant effect, said Assoc Prof Bian. When facing oxidative stress — a situation when the body is overwhelmed by harmful free radicals — cells can be damaged or even killed.

Hydrogen sulphide can produce antioxidative effect to counter oxidative stress, but its efficacy decreases with falling levels. The team’s animal model study showed that heat reduced levels of the gas, leading to lower sperm activity. If sufficient gas is provided to balance the internal deficiency in the body, the level can be corrected, Assoc Prof Bian explained. However, determining the right concentration of the gas is a challenge, he admitted, and further tests will be needed.

Hydrogen sulphide is widely studied for its antioxidative properties, but the NUS investigation represents the first on male reproductive cells.

Prof Wong pointed out that sperm can be affected by factors such as ageing, smoking, drugs, alcohol, heat, stress, toxins, infection and others. Current treatments for male infertility include oral drugs, male hormone products and injections, but they do not succeed in all patients.

Although their findings are exciting, Prof Wong underscored that many steps are required to ensure the same experiments work for humans, before figuring out how to administer the gas. “We hope this can transform into something we can treat people with,” he said, but cautioned that “we must not jump the gun”.