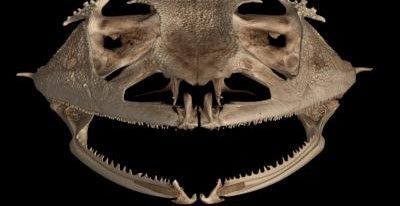 Some frog species have teeth while others are toothless. Still others have a combination of true teeth and toothlike structures. The Solomon Island leaf frog, Cornufer guentheri, has true teeth on its upper jaw and bony fangs on its lower jaw, which do not have enamel or dentin, a dense tissue found in teeth.
Daniel Paluh/Florida Museum of Natural History

GAINESVILLE, FL — Scientists have long known that frogs are oddballs when it comes to teeth. Some have tiny teeth on their upper jaws and the roof of their mouths while others sport fang like structures. Some species are completely toothless. And only one frog, out of the more than 7,000 species, has true teeth on both upper and lower jaws.

Now, the first comprehensive study of tooth evolution in frogs is bringing the group's dental history into focus. Florida Museum of Natural History researchers analyzed CT scans of nearly every living amphibian genus to reveal that frogs have lost teeth over 20 times during their evolution, more than any other vertebrate group. Some frog species may have even re-evolved teeth after losing them millions of years before.

Researchers also found a correlation between the absence of teeth in frogs and a specialized diet on small insects, such as ants and termites. Their analysis of frogs' amphibian relatives, the salamanders and obscure worm like animals known as caecilians, showed these groups retained teeth on both upper and lower jaws throughout their evolutionary history.

"Through this study, we have really been able to show that tooth loss in vertebrates is largely a story about frogs, with over 20 independent losses," said lead study author Daniel Paluh, a PhD candidate in the University of Florida's department of biology. "Only eight other groups of living vertebrates, including seahorses, turtles, birds, and a few mammals, have also evolved toothlessness.

Teeth first evolved more than 400 million years ago, quickly conferring a competitive advantage to animals that had them and leading to the diversification of sharks, bony fish, and ultimately the vertebrates that first roamed onto land.

Throughout their long history, teeth have been an important component of vertebrate evolution, yet some groups have done equally well without them. Birds lost their teeth around 100 million years ago with the advent of the beak, and both the largest known vertebrate, the blue whale, and the smallest, a frog from New Guinea, are entirely toothless.

Few researchers have focused on studying frog teeth, however, for the simple reason that they're incredibly small.

"If you open a frog's mouth, chances are you will not see teeth even if they have them, because they're usually less than a millimeter long," or smaller than the tip of a pencil, Paluh said.

That hasn't stopped some people from trying. In his study of the relationships between frog species, the famous 19th-century paleontologist Edward Cope lumped all toothless frogs into the same group, which he called Bufoniformia.

Researchers using modern genetic techniques have since shown that species in Bufoniformia aren't actually closely related, suggesting that the loss of teeth occurred more than once in frog evolution. But there the story stalled.

In the past, accurately determining which frogs had teeth would have required laborious work that irrevocably damaged or destroyed portions of preserved specimens. Frogs are also a highly diverse group, making a comprehensive assessment of their teeth a difficult task.

But Paluh and his colleagues had one major advantage: The Florida Museum leads a massive multi-institutional effort to CT scan 20,000 vertebrate specimens, giving researchers the ability to study animals in ways not previously possible.

The project, called oVert, allows anyone with an Internet connection to access 3D models derived from the scans, which depict distinct features of an organism, including bones, vasculature, internal organs, muscle tissue—and teeth. For Paluh, it meant he could virtually peer into the gape of a frog.

Working remotely during COVID-19 lockdowns, Paluh and fellow members of the museum's Blackburn Lab used oVert scans to carry out the study. To get the clearest picture of changes in teeth over time, the researchers included representatives of all amphibian groups. They analyzed patterns of tooth loss through time using a previously published map of evolutionary relationships between amphibians based on genetic data.

The study provides a powerful example of the research that can be accomplished with open-access data, said David Blackburn, Florida Museum curator of herpetology, Paluh's adviser and senior author of the study.

"We effectively crowdsourced the data collection across our lab, including people that were not in the US at that time," Blackburn said.

Their results showed that far from losing teeth once during their evolution, as suggested by the now debunked idea of the Bufoniformia, frogs have undergone "rampant tooth loss," Paluh said, with toothlessness popping up in groups as distantly related as toads and poison dart frogs.

The team also noted a tight correlation between the presence or absence of teeth in frogs and their eating habits. While dietary information is scant for many species of frogs, the researchers uncovered a connection between a diet of tiny insects and a lack of teeth.

"Having those teeth on the jaw to capture and hold on to prey becomes less important because they're eating really small invertebrates that they can just bring into their mouth with their highly modified tongue," said Paluh. "That seems to relax the selective pressures that are maintaining teeth."

Some species of poison dart frogs, for example, have evolved to feed mostly on ants and mites that produce toxic compounds, using their sticky, projectile tongues to scoop up their prey and swallow it whole. The frogs are able to store the toxins from their food source and repurpose them for their own use, secreting the compounds through their skin to ward off predators. And the turtle frog, a toothless burrowing species in Australia, tunnels through the maze of underground passages inside termite nests, hunting the insects that constructed them.

Teeth seem to be superfluous for mammals that feed on ants and termites as well. Pangolins and anteaters, which have highly specialized tongues for probing ant and termite nests, are both toothless.

Many questions remain about frogs' tooth biology, including how the genes that regulate their tooth production turn on and off. It's also unclear whether the serrated tooth like structures in frogs that regained these features are actually real teeth, Paluh said. To determine that, scientists will need to take a more in-depth look at these structures, looking for the presence of enamel and other key defining features.

Innovative techniques, such as those used in the oVert project, are beginning to underscore knowledge gaps and limitations like these, but they also open up the field to new discoveries, Blackburn said.

"We now have lots of new questions in my lab inspired by the surprising things turning up from 3D imaging from the oVert project, and those will lead us both back into museum collections and to the field to see what these animals are doing in the wild."

- This press release was originally published on the Florida Museum website. It has been edited for style