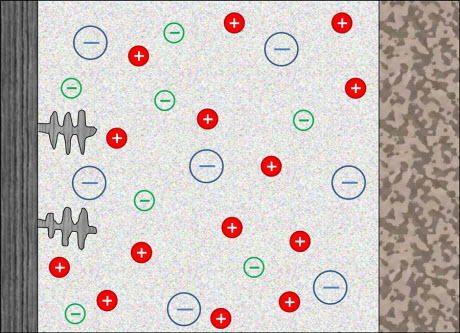 An illustration of the electrolyte inside a rechargeable battery, with the large blue spheres representing the immobile anions tethered to a solid matrix. The small red and green spheres represent the positive and negative ions, respectively; at left are dendrites, whose growth is limited by the immobilized anions.Image credit: Lynden Archer/ProvidedIt seems like fairly simple physics: If you construct a barrier that’s stronger than the material trying to penetrate it, the barrier should work.

That is the prevailing wisdom guiding the science of high-capacity rechargeable batteries that use reactive metals as the negative electrode: The membrane that separates the two electrodes should ideally be made of something that’s at least as strong as the metal itself.

“Because of the relatively high modulus [strength] of lithium metal at room temperature, it’s been thought for some time that the only membranes that can enable stable battery operation are ceramics,” said Lynden Archer, the James A. Friend Family Distinguished Professor of Engineering in the Cornell School of Chemical and Biomolecular Engineering (CBE).

“Unfortunately, few ceramics are conductive enough to meet other requirements of rechargeable batteries—including fast transport of ions, reasonable cost and manufacturability,” he said. “The status quo understanding has created a technological roadblock in our ability to engineer better batteries.”

The work proposes an approach that challenges conventional wisdom: tethering anions (negatively charged ions) in an elastic membrane of any strength could stabilize the battery through non-mechanical means. Tethered anions provide stability to any electrochemical cell that uses reactive metals as electrodes by reducing the electric field at the metal electrode, enhancing stability during recharge.

The team’s latest research builds on its previous work focused on addressing challenges to the design and safety of high-energy batteries, especially those based on metals, such as lithium, that are prone to failure due to tree-like growths called dendrites. These growths can cause short circuits, which can lead to not only the premature end of a battery’s life, but also explosion and fire.

A logical way to slow the sequence of events that lead to a dendrite-induced short is by increasing the strength of the membrane separating the two electrodes, which is the basis of current practice.

“A more fundamental approach would be to understand and thereby stop the nucleation event that produces the dendrites in the first place,” Archer said.

“And the lack of viable ways to reach the present targets of stability and conductivity also underscores the need for solutions outside the box,” Tikekar added.

The new paper shows that when a battery is operated at low power output, positive ions in the battery electrolyte diffuse freely throughout the separator. But at higher currents, negative ions migrate away from the region near the metal electrode, creating a depletion zone, which initiates dendrite formation.

By permanently tethering anions to the membrane, the depletion zone may be neutralized, preventing the chain of events that results in battery failure. This prediction, from Tikekar’s calculations, has already been confirmed experimentally, and the strategies for stabilizing deposition of metals revealed by his analysis has added significantly to the toolset available to materials scientists.

“While tethering anions can slow the development of dendrites, it is the combination of elastic stresses with fixed anions that leads to the complete suppression of dendrites,” Koch said.

Particularly exciting for the group: This method can apply not only to lithium but to other materials, such as sodium and aluminum.

“It turns out that pretty much any battery that uses an energetic anode has this problem [of dendrite growth],” Tikekar said. “And so the fact that in a single framework we can capture the physics that are in part responsible for it and propose methods for addressing it, it’s kind of a big deal. We hope to deepen our understanding by devising experiments to test the model more rigorously.”

The research reported in the Science Advances paper was supported as part of the Energy Materials Center at Cornell, an Energy Frontier Research Center funded by the U.S. Department of? Energy.