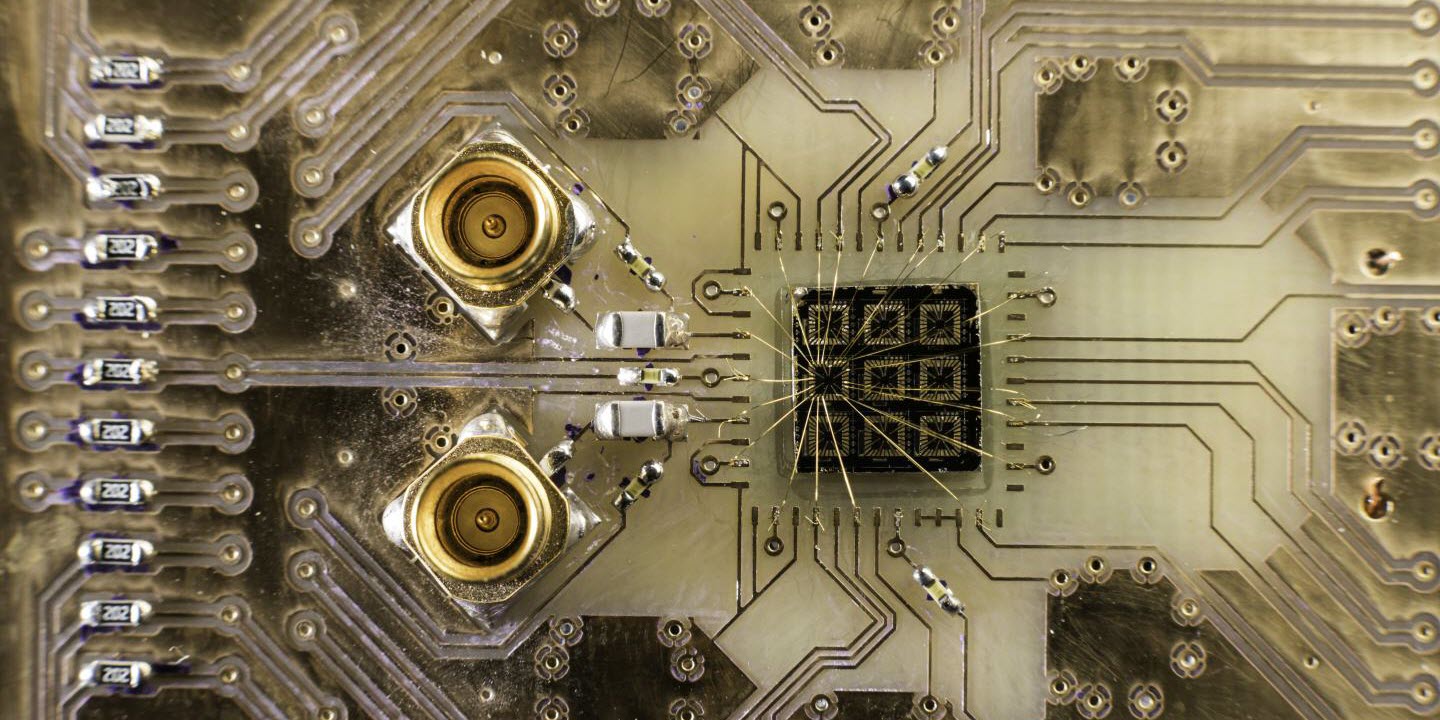 Insert Image Here (remove this text once you've added an image)
A quantum processor semiconductor chip is connected to a circuit board in the lab of John Nichol, an assistant professor of physics at the University of Rochester. Nichol and Andrew Jordan, a professor of physics, are exploring new ways of creating quantum-mechanical interactions between distant electrons, promising major advances in quantum computing.
University of Rochester photo, J. Adam Fenster

"Beam me up" is one of the most famous catchphrases from the Star Trek series. It is the command issued when a character wishes to teleport from a remote location back to the Starship Enterprise.

Last year scientists confirmed that information could be passed between photons on computer chips even when the photons were not physically linked.

Now, according to new research from the University of Rochester and Purdue University, teleportation may also be possible between electrons.

In a paper published in Nature Communications and one to appear in Physical Review X, the researchers, including John Nichol, an assistant professor of physics at Rochester, and Andrew Jordan, a professor of physics at Rochester, explore new ways of creating quantum-mechanical interactions between distant electrons. The research is an important step in improving quantum computing, which, in turn, has the potential to revolutionize technology, medicine, and science by providing faster and more efficient processors and sensors.

'Spooky action at a distance'

Quantum teleportation is a demonstration of what Albert Einstein famously called "spooky action at a distance"—also known as quantum entanglement. In entanglement—one of the basic of concepts of quantum physics—the properties of one particle affect the properties of another, even when the particles are separated by a large distance. Quantum teleportation involves two distant, entangled particles in which the state of a third particle instantly "teleports" its state to the two entangled particles.

Qubits made from individual electrons, however, are also promising for transmitting information in semiconductors.

"Individual electrons are promising qubits because they interact very easily with each other, and individual electron qubits in semiconductors are also scalable," Nichol says. "Reliably creating long-distance interactions between electrons is essential for quantum computing."

Creating entangled pairs of electron qubits that span long distances, which is required for teleportation, has proved challenging, though: while photons naturally propagate over long distances, electrons usually are confined to one place.

In order to demonstrate quantum teleportation using electrons, the researchers harnessed a recently developed technique based on the principles of Heisenberg exchange coupling. An individual electron is like a bar magnet with a north pole and a south pole that can point either up or down. The direction of the pole—whether the north pole is pointing up or down, for instance—is known as the electron's magnetic moment or quantum spin state. If certain kinds of particles have the same magnetic moment, they cannot be in the same place at the same time. That is, two electrons in the same quantum state cannot sit on top of each other. If they did, their states would swap back and forth in time.

The researchers used the technique to distribute entangled pairs of electrons and teleport their spin states.

"We provide evidence for 'entanglement swapping,' in which we create entanglement between two electrons even though the particles never interact, and 'quantum gate teleportation,' a potentially useful technique for quantum computing using teleportation," Nichol says. "Our work shows that this can be done even without photons."

The results pave the way for future research on quantum teleportation involving spin states of all matter, not just photons, and provide more evidence for the surprisingly useful capabilities of individual electrons in qubit semiconductors.