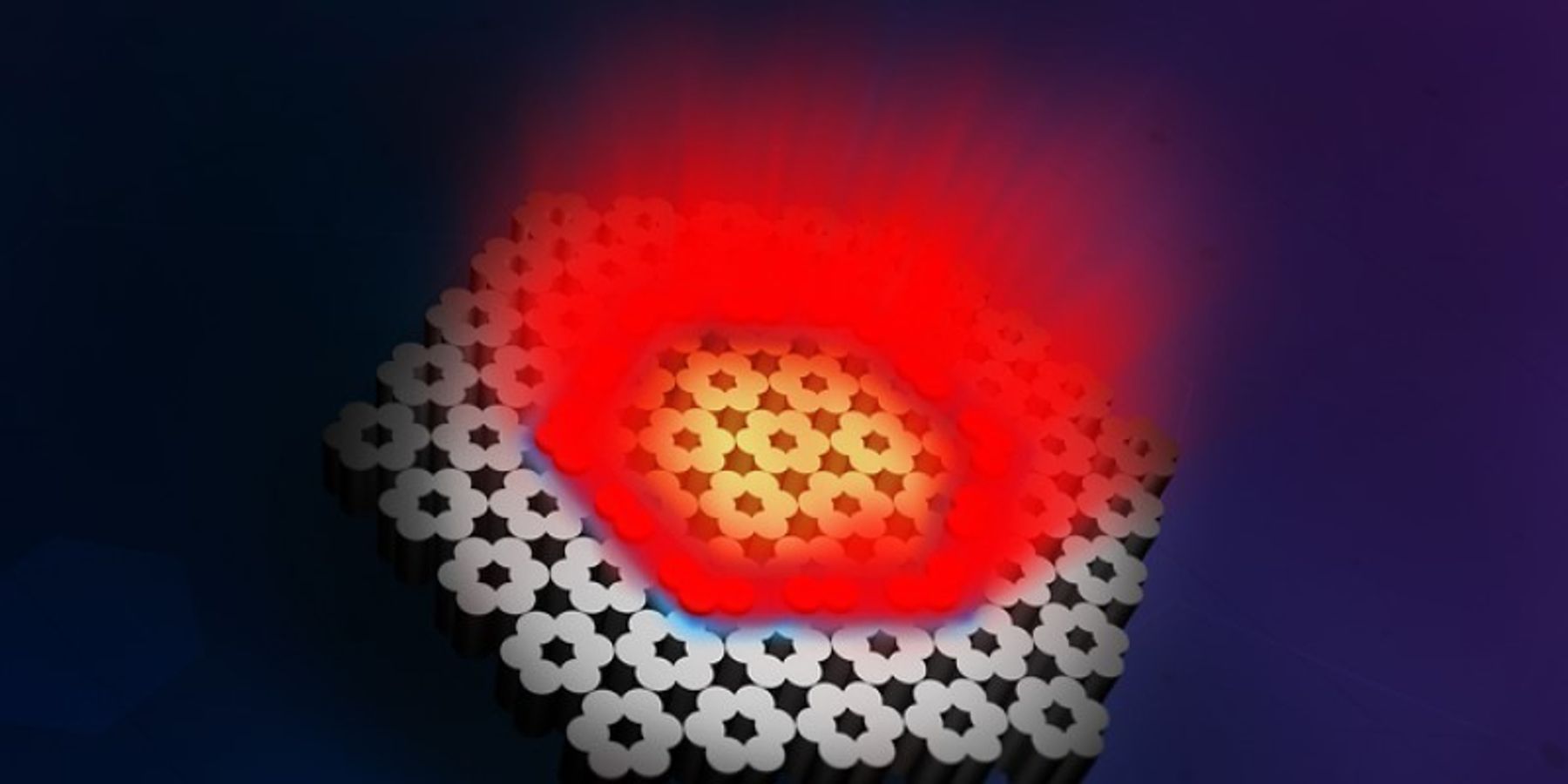 HAIFA, ISRAEL, AND WÜRZBURG, GERMANY — Israeli and German researchers have developed a way to force an array of vertical cavity lasers to act together as a single laser—a highly effective laser network the size of a grain of sand. The findings are presented in a new joint research paper published online by the prestigious journal Science.

Cell phones, car sensors, or data transmission in fiber optic networks are all using so called Vertical-Cavity Surface-Emitting Lasers (VCSELs)—semiconductor lasers that are firmly anchored in our everyday technology. Though widely used, the VCSEL device has miniscule size of only a few microns, which sets a stringent limit on the output power it can generate. For years, scientists have sought to enhance the power emitted by such devices through combining many tiny VCSELs and forcing them to act as a single coherent laser, but had limited success. The current breakthrough uses a different scheme: it employs a unique geometrical arrangement of VCSELs on the chip that forces the flight to flow in a specific path—a photonic topological insulator platform.

Topological insulators are revolutionary quantum materials that insulate on the inside but conduct electricity on their surface—without loss. Several years ago, the Technion group led by professor Mordechai Segev has introduced these innovative ideas into photonics, and demonstrated the first Photonic Topological Insulator, where light travels around the edges of a two-dimensional array of waveguides without being affected by defects or disorder. This opened a new field, now known as "Topological Photonics," where hundreds of groups currently have active research. In 2018, the same group also found a way to use the properties of photonic topological insulators to force many micro-ring lasers to lock together and act as a single laser. But that system still had a major bottleneck: the light was circulating in the photonic chip confined to the same plane used for extracting the light out. That meant that the whole system was again subject to a power limit, imposed by the device used to get the light out, similar to having a single socket for a whole power plant. The current breakthrough uses a different scheme: the lasers are forced to lock within the planar chip, but the light is now emitted through the surface of the chip from each tiny laser and can be easily collected.

This German-Israeli research project originated primarily during the COVID-19 pandemic. Without the enormous commitment of the researchers involved, this scientific milestone would not have been possible. The research was conducted by PhD student Alex Dikopoltsev from Segev’s team, in the Physics Department and the Electrical & Computer Engineering Department at the Technion—Israel Institute of Technology, and PhD student Tristan H. Harder from the team of professor Sebastian Klembt and professor Sven Höfling at the Chair of Applied Physics at the University of Würzburg, and the Complexity and Topology in Quantum Matter (CT QMat) Cluster of Excellence, in collaboration with researchers from Jena and Oldenburg. The device fabrication took advantage of the excellent clean room facilities at the University of Würzburg.

“It is fascinating to see how science evolves," said Segev. "We went from fundamental physics concepts to foundational changes therein, and now to real technology that is now being pursued by companies. Back in 2015, when we started to work on topological insulator lasers, nobody believed it's possible, because the topological concepts known at that time were limited to systems that do not, in fact—cannot—have gain. But all lasers require gain. So topological insulator lasers stood against everything known at that time. We were like a bunch of lunatics searching for something that was considered impossible. And now we have made a large step towards real technology that has many applications."

The Israeli and German team utilized the concepts of topological photonics with VCSELs that emit the light vertically, while the topological process responsible for the mutual coherence and locking of the VCSELs occurs in the plane of the chip. The end result is a powerful but very compact and efficient laser, not limited by a number of VCSEL emitters, and undisturbed by defects or altering temperatures.

"The topological principle of this laser can generally work for all wavelengths and thus a range of materials," explains Klembt, working on light-matter interaction and topological photonics within the CT QMat Cluster of Excellence. "Exactly how many microlasers need to be arranged and connected would always depend entirely on the application. We can expand the size of the laser network to a very large size, and in principle it will remain coherent also for large numbers. It is great to see that topology, originally a branch of mathematics, has emerged as a revolutionary new toolbox for controlling, steering, and improving laser properties."

The groundbreaking research has demonstrated that it is in fact theoretically and experimentally possible to combine VCSELs to achieve a more robust and highly efficient laser. As such, the results of the study pave the way towards applications of numerous future technologies such as medical devices, communications, and a variety of real-world applications.