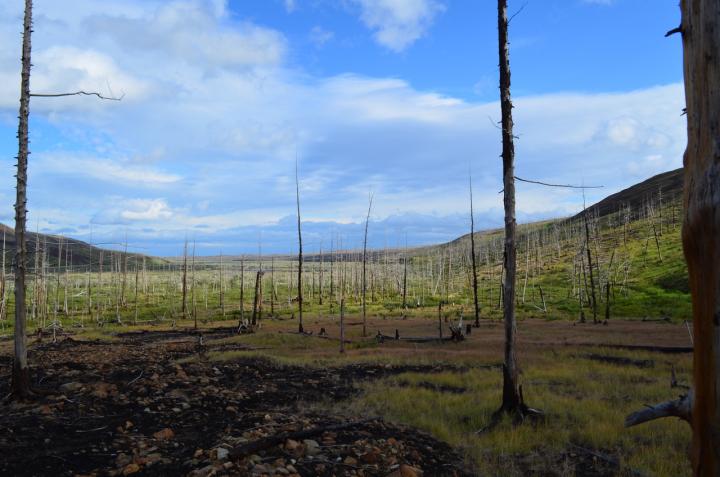 The largest-ever study of tree rings from Norilsk in the Russian Arctic has shown that the direct and indirect effects of industrial pollution in the region and beyond are far worse than previously thought.

An international team of researchers, led by the University of Cambridge, has combined ring width and wood chemistry measurements from living and dead trees with soil characteristics and computer modeling to show that the damage done by decades of nickel and copper mining has not only devastated local environments, but also affected the global carbon cycle.

The extent of damage done to the boreal forest, the largest land biome on Earth, can be seen in the annual growth rings of trees near Norilsk where die off has spread up to 100 kilometers. The results are reported in the journal Ecology Letters.

Norilsk, in northern Siberia, is the world's northernmost city with more than 100,000 people, and one of the most polluted places on Earth. Since the 1930s, intensive mining of the area's massive nickel, copper, and palladium deposits, combined with few environmental regulations, has led to severe pollution levels. A massive oil spill in May 2020 has added to the extreme level of environmental damage in the area.

Not only are the high level of airborne emissions from the Norilsk industrial complex responsible for the direct destruction of around 24,000 square kilometers of boreal forest since the 1960s, surviving trees across much of the high-northern latitudes are suffering as well. The high pollution levels cause declining tree growth, which in turn have an effect of the amount of carbon that can be sequestered in the boreal forest.

However, while the link between pollution and forest health is well-known, it has not been able to explain the 'divergence problem' in dendrochronology (the study of tree rings): a decoupling of tree ring width from rising air temperatures seen since the 1970s.

Using the largest-ever dataset of tree rings from both living and dead trees to reconstruct the history and intensity of Norilsk's forest dieback, the researchers have shown how the amount of pollution spewed into the atmosphere by mines and smelters is at least partially responsible for the phenomenon of 'Arctic dimming,' providing new evidence to explain the divergence problem.

"Using the information stored in thousands of tree rings, we can see the effects of Norilsk's uncontrolled environmental disaster over the past nine decades," said professor Ulf Büntgen from Cambridge's Department of Geography, who led the research. "While the problem of sulfur emissions and forest dieback has been successfully addressed in much of Europe, for Siberia, we haven't been able to see what the impact has been, largely due to a lack of long-term monitoring data."

The expansion of annually-resolved and absolutely dated tree ring width measurements compiled by the paper's first author Alexander Kirdyanov, along with new high-resolution measurements of wood and soil chemistry, allowed the researchers to quantify the extent of Norilsk's devastating ecosystem damage, which peaked in the 1960s.

"We can see that the trees near Norilsk started to die off massively in the 1960s due to rising pollution levels," said Büntgen. "Since atmospheric pollution in the Arctic accumulates due to large-scale circulation patterns, we expanded our study far beyond the direct effects of Norilsk's industrial sector and found that trees across the high-northern latitudes are suffering as well."

The researchers used a process-based forward model of boreal tree growth, with and without surface irradiance forcing as a proxy for pollutants, to show that Arctic dimming since the 1970s has substantially reduced tree growth.

Arctic dimming is a phenomenon caused by increased particulates in the Earth's atmosphere, whether from pollution, dust, or volcanic eruptions. The phenomenon partially blocks out sunlight, slowing the process of evaporation and interfering with the hydrological cycle.

"What surprised us is just how widespread the effects of industrial pollution are—the scale of the damage shows just how vulnerable and sensitive the boreal forest is," said Büntgen. "Given the ecological importance of this biome, the pollution levels across the high-northern latitudes could have an enormous impact on the entire global carbon cycle."