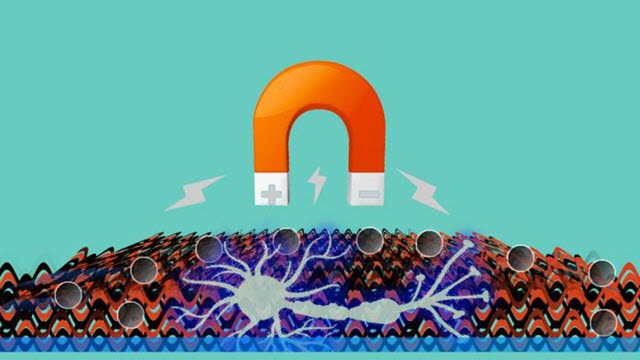 UCLA bioengineers have demonstrated that a gel-like material containing tiny magnetic particles could be used to manage chronic pain from disease or injury. Broadly, the study demonstrates the promising use of biomechanical forces that push and pull on cells to treat disease.

"Much of mainstream modern medicine centers on using pharmaceuticals to make chemical or molecular changes inside the body to treat disease," said Dino Di Carlo, UCLA professor of bioengineering and the principal investigator of the study. "However, recent breakthroughs in the control of forces at small scales have opened up a new treatment idea—using physical force to kick-start helpful changes inside cells. There's a long way to go, but this early work shows this path toward so-called 'mechanoceuticals' is a promising one."

The researchers used small magnetic particles inside a gel to control cell proteins that respond to mechanical stimulation, and which control the flow of certain ions. These proteins are on the cell's membrane and play a role in the sensations of touch and pain. The study was published in Advanced Materials.

"Our results show that through exploiting 'neural network homeostasis,' which is the idea of returning a biological system to a stable state, it is possible to lessen the signals of pain through the nervous system," said Andy Kah Ping Tay, a recent UCLA doctoral graduate who was the lead author of the study. "Ultimately, this could lead to new ways to provide therapeutic pain relief."

To make the magnetized gel, they started with a polymer, hyaluronic acid, a gel-like material found naturally in the spinal cord and the brain, which helps provide structural support to cells in those parts of the body. The material is also produced artificially and used in cosmetics and beauty products as a filler and moisture barrier.

The researchers put tiny magnetic particles into the biocompatible gel. Next, they grew a type of primary neural cell—dorsal root ganglion neurons—in the gel.

In laboratory tests, they applied a magnetic field to generate a "pulling" force on the particles, which was transmitted through the gel to the embedded cells.

In the study, the team suggested that the magnetic gel could be tailored with different biomaterials for therapies for cardiac and muscle disorders. These types of biomaterials could also be used in scientific studies to emulate concussions or other traumatic events where cells in the body are impacted by significant physical forces.

Tay is currently a postdoctoral fellow at Stanford University. He will start a faculty appointment at National University of Singapore next year.

Other study authors include UCLA graduate student Ali Sohrabi; Stephanie Seidlits, a UCLA assistant professor of bioengineering; and Kate Poole of the University of New South Wales in Australia.