Terahertz radiation, or T-rays, has barely been exploited compared to most of the rest of the electromagnetic spectrum. Yet T-rays potentially have applications in next-generation wireless communications (6G/7G), security systems, biomedicine, and even art history. A new device for controlling T-rays using a specially designed 'metasurface' with properties not found in nature could begin to realize this potential.

The findings were published in the peer-reviewed journal Optics Express on July 13th, 2020.

The 'terahertz gap' is a term used by engineers to describe how very little technology exists that makes use of the frequency band in the electromagnetic spectrum that lies between microwaves and infrared radiation: terahertz radiation (also called T-rays).

While it is straightforward to generate and manipulate microwaves and infrared radiation, practical technologies that operate at room temperature and that are able to do the same with T-rays are inefficient and impractical.

This is a great shame, as the properties of T-rays would make them extremely useful if we could indeed harness them.

T-rays can penetrate opaque objects like X-rays, but they are non-ionizing, so much safer. They can also go through clothing, wood, plastics, and ceramics, so are of interest for the security and surveillance sector for real-time imaging to identify concealed guns or explosives. For this same reason, terahertz radiation applications are also promising for cultural heritage science, offering art historians and museums a no-radiation risk option for investigation of artifacts ranging from paintings to mummies.

Terahertz technology that allows generation, detection, and application of terahertz waves has taken off in the last decade or so, closing the terahertz gap somewhat. But the performance and dimensions of conventional optical components able to manipulate terahertz waves have not kept up with this rapid development. One reason is the lack of naturally occurring materials suitable for the terahertz waveband. 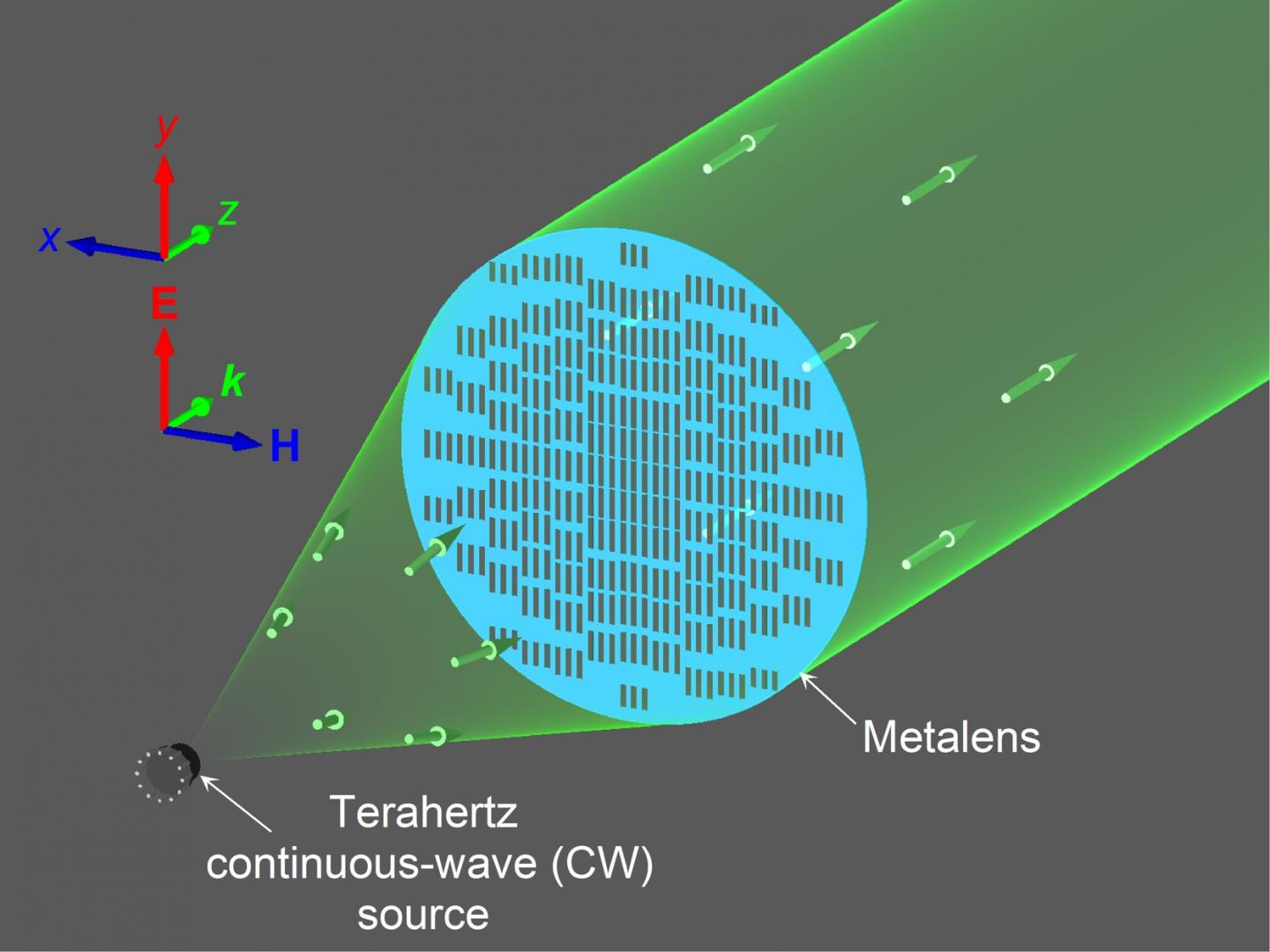 However, researchers at Tokyo University of Agriculture and Technology (TUAT) led by associate professor and terahertz wave engineer Takehito Suzuki have recently developed an optical component that can more easily manipulate T-rays and in a practical fashion—by using a material that doesn't occur in nature.

Conventionally, a collimator—a device that narrows beams or waves, typically consisting of a curved lens or mirror—that can manipulate T-rays is a bulky three-dimensional structure made of naturally occurring materials.

But the TUAT researchers, Takehito Suzuki, Kota Endo, and Satoshi Kondoh, have devised a collimator as an ultra-thin (2.22 micrometers) plane made from a 'metasurface'—a material that is engineered to have properties that are impossible or difficult to find in nature. These properties come not from whatever metal or plastic base substance they are composed of, but instead from the geometry and arrangement of the material in tiny repeating patterns that can bend electromagnetic waves in a way that natural substances cannot.

In this case, the material has an extremely high refractive index (how slow light travels through it) and low reflectance (proportion of light reflected after striking a surface). The collimator consists of 339 pairs of meta-atoms arranged so that the refractive index concentrically increases from the outside to the center of the device.

"The metasurface design is unprecedented," said Suzuki, "delivering a much higher performance that should accelerate the development of a wide range of applications, including next-generation wireless communications (6G/7G) and even thermal radiation control devices."