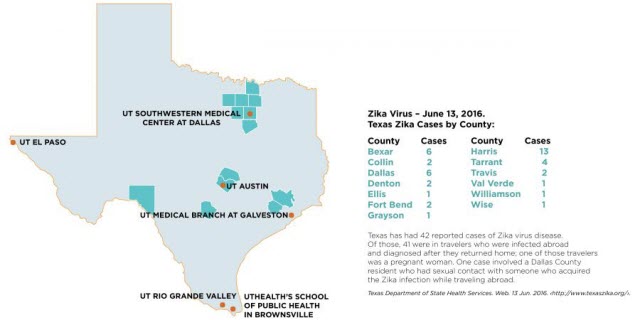 Map courtesy of the Texas Department of State Health Services

As the Zika virus continues to spread around the world, Latin American countries most affected by the mosquito-borne disease are employing the expertise of researchers at the University of Texas Medical Branch in Galveston to fight the deadly epidemic.

The Brazilian Ministry of Health is collaborating with UTMB faculty researchers to develop a Zika vaccine. UTMB will be working with Cuban scientists at Instituto Pedro Kouri in Havana on a two-year research development program to combat infectious diseases such as Zika. 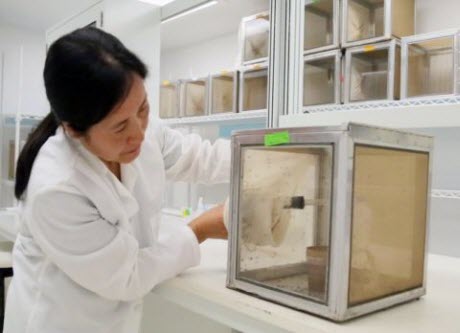 UTMB research associate Ruimei Yun catches some mosquitos with a vacuum device at UTMB's insectary.Photo courtesy of the University of Texas SystemUTMB’s world-class researchers and facilities—including the Institute for Human Infections and Immunity and The World Reference Center for Emerging Viruses and Arboviruses—are global leaders in the fight against Zika.

Several other University of Texas System institutions also have increased efforts to study and combat Zika, which has triggered fear in the United States as mosquito season ramps up.

“The UT System is leading the way on multiple fronts to knock out this virus,” said David Lakey, MD, the System’s chief medical officer. “This situation demands urgency, as the mosquitoes that spread Zika are most active during the summer.”

Lakey recently was selected to help plan and present at a workshop convened by the National Academies of Sciences, Engineering and Medicine to discuss and explore the key factors associated with the Zika virus. The workshop came at the request of the U.S. Department of Health and Human Services' Assistant Secretary for Preparedness and Response.

“We are leveraging our size and expertise to understand Zika at its fundamental level and disseminate the best and most timely information to help state, local and federal agencies fight this terrible virus,” McRaven said.

Video courtesy of the University of Texas System

In one of the biggest Zika research breakthroughs to date , a team of UTMB researchers became the first scientists in the world to genetically engineer a clone of the Zika virus strain. This groundbreaking discovery could speed up many aspects of Zika research, including the development of vaccines and treatments.

“The new Zika clone represents a major advance toward deciphering why the virus is tied to serious diseases,” said Pei-Yong Shi, PhD, a UTMB professor who led the clone study.

The study shows that the virus—linked to microcephaly and other birth defects in newborns—infects brain cells destined to become neurons, according to UTSW microbiologist John Schoggins, PhD, the study’s senior author. This scientific knowledge is invaluable to further understand how Zika causes severe brain-related problems.

At UT Austin, biology professor David Herrin, PhD, wants to stop the virus by attacking its host, the Aedes mosquitoes.

Herrin is combining algae with a bacterium that attacks mosquitoes in places such as ponds, where their larvae grow. Right now, only the bacterium attacks the guts of mosquitoes and certain flies, but Herrin is working to modify the algae so that it attacks the Aedes and Culex mosquitoes, the latter carries other infectious diseases such as the West Nile virus.

UT Austin students are also getting involved in the Zika fight.

Undergrads from the Freshman Research Initiative are working under the leadership of UT Austin molecular biosciences professor Andy Ellington, PhD, to create a cheap and simple hand-held device for the public to test mosquitoes in their own backyards for Zika. The do-it-yourself device requires little technical knowledge and would produce results in 45 minutes by testing dead mosquitoes.

“This is a really quick and efficient way of being able to identify whether or not a mosquito is carrying a virus,” said Nicole Pederson, a biology major. 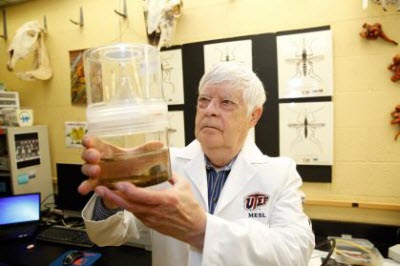 Doug Watts, PhD, who leads the University of Texas at El Paso's Mosquito Ecology and Surveillance Laboratory, is tracking the aedes aegypti mosquito, which is known for spreading the Zika virus.Photo courtesy of the University of Texas SystemUT Austin integrative biology professor Sahotra Sarkar, PhD, is projecting the global spread of Zika in 100 cities based on the prevalence of two Aedes mosquitoes species. The first species, Aedes aegypti, is known to be effective at spreading the virus to humans. The second species, Aedes albopictus, is also a carrier of Zika and found in many more cities, but researchers are trying to determine whether it can spread the virus.

Meanwhile, UT Rio Grande Valley biologists Christopher Vitek, PhD, and John Thomas, PhD, are launching several projects with state and South Texas officials to pinpoint the location and density of Aedes mosquitoes by locating their eggs. They are collaborating with a team of researchers from UTHealth Houston’s School of Public Health in Brownsville, led by Joseph McCormick, MD, on the South Texas study.

Near the Mexican border, UT El Paso’s Mosquito Ecology and Surveillance Laboratory, led by Doug Watts, PhD, is tracking the Aedes aegypti to see if it’s carrying the virus around El Paso and studying the insect’s biology and ecology.

“If mosquito control is ever going to work, the number one priority is education,” said Watts, who has been chasing down the deadly insect since 1977. “It’ll be a never-ending profession to stay ahead of them.”