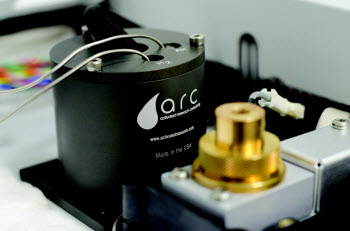 The Polyarc system is a 3D-printed catalytic microreactor which enhances new or existing gas chromatographs with flame ionization detectors (GC/FIDs) by converting all organic compounds to methane prior to their detection by the FID. It has been specially engineered using ARC’s experience in reaction engineering, catalysis, and fluid dynamics. Users of the Polyarc system experience superior GC/FID performance and increased sensitivity while maintaining chromatographic separation. The Polyarc system features proprietary technologies including novel catalysts, a specially designed 3D-printed metal microreactor, and fast and seamless integration onto existing equipment.

The objective of the Polyarc system is to enable chemists around the world to more accurately and efficiently analyze a wider array of compounds using GC/FID. The Polyarc gives scientists the capability to determine purity, quantify unknowns, qualify products, investigate renewable feedstocks, improve food and drug development, and more, using an approach that is better, faster, and cheaper than ever before. The industries in which the device has been used include: chemicals, paints & coatings, flavors & fragrances, pharmaceuticals, biofuels, petroleum, and more. A unique application of the Polyarc involves a Polyarc/FID and MS split configuration; this allows for simultaneous identification and quantification with a single injection.

The Polyarc offers a step change in GC/FID analysis efficiency. GC/FID analysis without the Polyarc necessitates calibration for most analytes to know the correct FID response factors (and therefore accurately quantify). This calibration involves two steps: identifying unknowns and obtaining calibration standards for each respective analyte. Identification of unknowns is a tedious process, and obtaining or synthesizing standards for these compounds is difficult and sometimes even unfeasible. The Polyarc allows scientists to run their analyses without the need for these calibrations, making GC/FID analysis universal for the first time in its history. From an environmental and sustainability standpoint, this is a massive benefit.  With a single GC/FID injection, a mixture can be accurately quantified, without the need for calibration standards and without the cost to the environment needed to produce them.

This ease of analysis the Polyarc provides has allowed scientists to do what they have never been able to do before. For example, the Polyarc allowed professor Paul Dauenhauer at the University of Minnesota to develop the chemistry to synthesize isoprene, the key component of rubber, from glucose. The Polyarc, therefore, has allowed for rubber tires to be made from renewable feedstocks instead of from the isoprene derived from crude oil—a step change in environmental protection, and that is one of many examples of what the Polyarc has allowed users to achieve.