NOTTINGHAM, UK — Sygnature Discovery has added in-house high-throughput screening (HTS) to its range of drug discovery services. This is backed up by its new Leadfinder compound library. 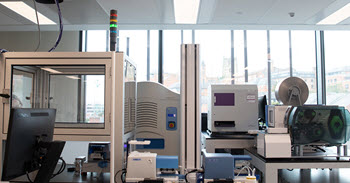 Sygnature’s new HTS system combines Titian Mosaic sample management technology with an automation platform from HiRes Biosolutions. Data analysis is facilitated using Genedata software. This is the first time these three leading vendors have worked together on the same system in order to create a high level of data fidelity during the screening operations.

The screening capability is underpinned by the Leadfinder library of 150,000 molecules. These were carefully selected by Sygnature’s team of experienced computational and medicinal chemists. A further 100,000 compounds will be designed and synthesised over the next five years.

"The molecules were all selected to have lead-like molecular properties, and contain no undesirable functional groups," says John Unitt, director of bioscience at Sygnature Discovery. "Many commercial chemical libraries contain some molecules with features we would not want to incorporate into a drug lead. We have designed our Leadfinder library to avoid these problems."

The library compounds are kept under dry, cool conditions and in an atmosphere of nitrogen to reduce the likelihood that they will oxidize or decompose on storage.

"We decided to build our own HTS capability after feedback from our clients, especially around compound quality in many historical screening libraries," says Colin Sambrook Smith, Sygnature’s director of computational sciences & informatics. "Having the capability housed within our Nottingham labs, where it can be integrated with our other hit-finding functions, will bring an enormous amount of additional value to our clients and their drug discovery projects."