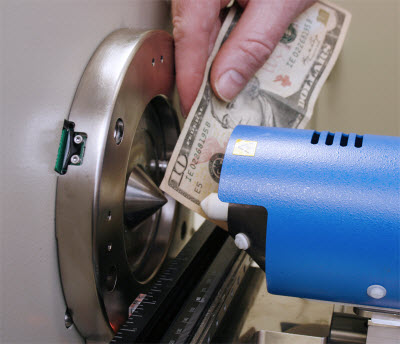 Currency is analyzed in the DART ion source.Photo courtesy of JEOLMost of us have heard that trace amounts of cocaine can be found on almost all U.S. one-dollar bills. What’s news is what else you could be carrying around on your paper money, things that even come as a surprise to one chemist who’s familiar with analyzing currency.

“The cocaine is so common that what is interesting is what other substances we find,” says Dr. Robert (Chip) Cody, mass spectrometry product manager at JEOL. Cody has been analyzing currency with the company’s AccuTOF-DART ion source, which he co-invented with Jim Laramée, since the company first started testing the prototype in late 2002 and early 2003. “I saw Ritalin (the amphetamine-like ADHD drug) on a bill shortly after we started doing this.”

He added that around a month ago, they found a powerful synthetic opiate known as fentanyl along with methadone and traces of heroin on a twenty-dollar bill.

Over the years of analyzing U.S. dollar bills with the DART system, they’ve found a variety of other compounds that aren’t as surprising, given the cosmetics people slather onto themselves on a daily basis. Glycerin, triethanolamine (an oily ingredient found in cosmetics and inks), plasticizers, bug spray (DEET), nicotine from cigarette smoke, sunscreen, compounds from fingerprints, and ink from red markers and ballpoint pens are all things they’ve found since they got into the currency analysis game.

Of course, Cody and his team aren’t the only ones analyzing money, and they weren’t the first to detect cocaine on dollar bills.

“As I understand it, the FBI Lab uses the DART to detect currency-pack dye,” Cody explains. “That’s the red dye that is used to mark currency from bank robberies. It’s important to distinguish it from red marker ink that might be found on bills for less sinister reasons.”

“The cocaine is so common that what is interesting is what other substances we find.”

Cocaine, however, was where it all started for Cody. Shortly after he and Laramée got the DART prototype working, Cody mentioned the system would be able to detect substances on surfaces, and Laramée suggested they look for cocaine on currency.

“When I first detected it, I swabbed the bill with solvent and verified the presence of cocaine by using the more traditional approach with our GC/MS system,” Cody says. “Of course, we weren’t the first people to detect cocaine on dollar bills, but with the ease of analysis by DART, we have run the cocaine analysis routinely over several years as a ‘parlor trick’ demonstration that really fascinates visitors.

What surprised me was how widespread the cocaine is.  At some level, it’s on every U.S. bill that has been circulated, and on a large percentage of the foreign currencies we have examined.”

Now in its fourth generation and celebrating its tenth anniversary as the AccuTOF DART 4G, the DART continues to detect unexpected substances on money.

“I was able to detect methamphetamine for the first time because the new system allowed me to separate the drug from the triethanolamine, which has an exact molecular weight that is very close,” Cody says. “I also found lidocaine on one of the bills. That is a local anesthetic that is often added to street drugs because it mimics the numbing effect of cocaine.”

But it was a recent find that surprised Cody the most of everything they discovered on the bills.

Upon re-examining that twenty-dollar bill that had fentanyl, methadone, and heroin on it, they discovered levamisole, a pharmaceutical that veterinarians use for the treatment of worms. The substance, however, is also used as an adulterant in cocaine sold in the U.S. and Canada and is well-known to forensic chemists. Levamisole is also something you wouldn’t want in your system as it has serious health risks beyond those caused by the use of cocaine. Spectra from DART analysis of a U.S. $20 bill.Image courtesy of JEOLThe fentanyl was the second-most unexpected drug for Cody during recent analyses of currency.

“That’s a very powerful and very dangerous drug unless used as prescribed by a doctor,” he explains. “We were also surprised to find that the cocaine is most highly concentrated on the portrait on a dollar bill. We think that might be a result of the intaglio printing and perhaps some absorbent properties of the ink.”

But, those worried about the potential effects of such substances being on their money have nothing to fear–according to Cody, the levels of drugs on the currency are too low to pose a threat to human health. Still, analyzing dollar bills for such substances turns up interesting forensic information, and it’s a neat way to test the latest analytical technology.