Historically, when attempting to authenticate a particular work of art, or when attributing a painting to a particular artist, the task has fallen to the curator and the art historian. The curator’s role is to examine the provenance of a particular piece by determining the succession of ownership back to the original artist, while the art historian typically would perform a stylistic analysis to determine if the piece reflects the artist’s particular technique and application as well as their style and brushwork. Unfortunately, in many cases the provenance of an artwork is simply not known, or can’t be reliably validated, and a skilled and clever forger can often imitate an artist’s particular style and technique, making the entire evaluation somewhat subjective.

Nowadays, when attempting to attribute a piece of art to a particular artist you are more likely to encounter scientists working behind the scenes at a gallery or museum. New techniques and advances in a number of analytical instruments allows the body of a painting to be examined in spectacular detail to determine the precise composition of organic and inorganic pigments and binders. Specifically, X-ray fluorescence spectroscopy (XRF), infrared spectroscopy (IR), and Raman spectroscopy offer simple, non-destructive, in situ analysis of paints, pigments, and resins. Spectroscopic analysis of a questioned artwork can provide critical information regarding the materials and chemical composition of pigments used—either supporting its authenticity or revealing materials inconsistent with the item being genuine.

Roughly 2 ½ hours from Bucks County, and 3 ½ hours outside of New York City lies Mill Hall Pennsylvania, the location of the Lock Haven Motel—the original home of two purported Jackson Pollock paintings, known as Mill Hall #1 and Mill Hall #2. According to local lore, Pollock gifted the two paintings as payment for a hotel/ bar visit while traveling through the town. Given Pollock’s lifelong struggle with alcoholism, this may be a plausible scenario and consistent with other Pollock paintings made by the artist for barter. Regardless, it is known that Jackson Pollock was included in an exhibit in Lock Haven, PA in 1951 where his sculpture was being exhibited as part of the Museum of Art tour, which supports his connection to the community. 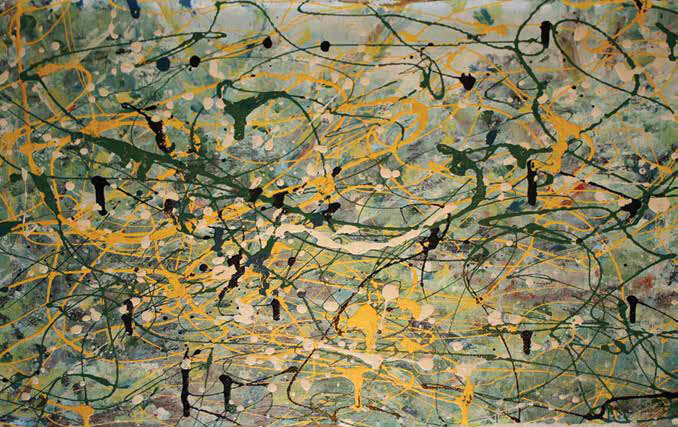 Figure 1 : Mill Hall #1 is typical of Jackson Pollock's abstract expressionist style.In 1992, Mill Hall #1 was examined by the Philadelphia Museum of Art. However, with incomplete provenance, no analytical testing or side-by-side comparison was completed. In 2003 both pieces were rejected by the International Foundation for Art Research (IFAR) for incomplete provenance and artistic interpretation.

However, recent analysis of Mill Hall #1 and #2 performed by Tom Tague, PhD of Bruker Corporation (Billerica, MA) provides compelling evidence that these paintings are in fact genuine Pollock originals.

Mill Hall #1 (Figure 1), is typical of Pollock’s abstract expressionist “drip painting” style with a limited color palette characteristic of many of his other works. The work itself is on masonite and has been cut down slightly for framing. In an attempt to authentic the two paintings, they were analyzed by Tague using Bruker Technologies XRF, IR, and Raman spectroscopy instruments.

Analysis of the black drip paint indicates an alkyd enamel paint containing both lead- and carbon-based pigments. This is consistent with paints used at the time Pollock was painting. Raman spectra of the black and gray areas identify the pigment as Bone black based on reference pigment.

Red drip IR analysis indicates an alkyd enamel paint containing calcium (calcite) and is a library match for PR3. Further, the Raman spectrum of the red drip is an almost perfect match to PR3— an azo-naphthol pigment known as Toluidine red used by Pollock in at least two other known paintings.

Analysis of the white and blue drips by IR also both indicate an ortho alkyd enamel, while Raman spectrum is a match for titanium dioxide rutile anhydrite and Prussian blue respectively. 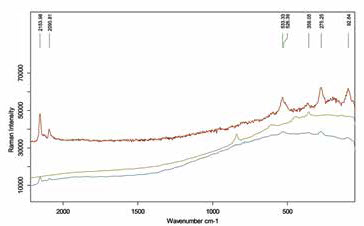 Figure 2: Raman spectra of green drip indicates mixing of Prussian blue and chrome yellow paints.The Raman spectrum of the yellow drip identifies it as chrome yellow, additional bands at 448 and 609 nm also indicate the presence of TiO2 rutile anhydrite. XRF indicated the presence of both lead and chromium, while IR indicated an ortho alkyd enamel consistent with the other drip colors.

Finally, the Raman spectrum of the green drip indicates it was comprised of both the Prussian blue and a smaller amount of the chrome yellow (Figure 2). As with the other colors, the paint was identified by IR as an ortho alkyd enamel, and XRF indicated the presence of both lead and chromium.

Mall Hall 2 (Figure 3) bears striking similarity to other Pollock works of the same period both in style and color palette. Spectroscopic analysis of the pigments showed exact matches to Mill Hall #1 for bone black and toluidine red, while the Raman gray spectra was a combination of the previously collected black and white spectra.

Perhaps the most interesting result from the analysis was the discovery of an obscured signature across the body of the painting in Pollock’s typical style (Figure 4). This is a significant finding as this has not been previously noted this obvious in any of Pollock’s other works. The work “Mural” also is suspected of containing Pollock’s name within the painting. Further analysis conducted separately notes that the letter style is similar to typical Pollock signatures, particularly the distinctive “J” partially visible on Mill Hall #2. Separately, the actual signature in the lower right portion of the painting contains a black paint droplet on top of the signature. This was verified by FPA FTIR imaging, confirming that the Pollock signature at the bottom of the painting was in fact a signed work.

Overall, spectroscopic methods are an effective tool for conducting a detailed study of elemental and molecular composition. In this case, elemental, IR and Raman comparisons of the Mill Hall paintings to other known Pollock works show that they are very similar in nature, and that the paint types were consistent with those used at the time by Pollock. In fact, no inconsistencies in paints identified were found when compared to previously known Pollock works.

This evidence, when combined with other scientific testing including carbon dating, fingerprint analysis as well as mitochondrial DNA analysis, and with recently updated provenance, suggests that two new pieces may be soon added to the works of the artist many consider to be the greatest painter America has ever produced.

This feature was crafted by Lab Manager’s Creative Services Team and sponsored by Bruker.