Top Image:
This month, we break down some of the latest standout products, technology, and applications in the microscopy space, as well as a few of the major trends.
iStock, dra_schwartz
Mar 30, 2022Rachel Muenz

Advancement in microscopy comes at a rapid pace. This month, we break down some of the latest standout products, technology, and applications in the microscopy space, as well as a few of the major trends.

A new fluorescent dye for (d)STORM [(direct) stochastic optical reconstruction microscopy] was developed by scientists from the University of California, Berkeley and biotechnology company Biotium, enabling high-quality super-resolution microscopy image capture under green excitation. By replacing the benzene ring in the rhodamine core, researchers were able to boost photoswitching behavior of rhodamine dyes, introducing a new color channel to contrast the existing red, they explained in Angewandte Chemie.

Another new product in development related to fluorescence involves a new generation of calibration slides from French manufacturer Argolight. The new lineup features improved quantum efficiency, making the slides’ fluorescence 100 percent more intense than the previous generation, according to a press release.

In other fluorescence microscopy-related work, researchers at the Max Planck Institute of Molecular Physiology and their colleagues recently developed a method to deal with some of the limitations of observing living cells. They cooled living cells at speeds up to 200,000°C per second to -196°C, allowing the researchers to preserve cellular biomolecules, “in their natural arrangement at the moment of arrest,” according to a December press release on the work. Their technique, called ultrarapid cryo-arrest, prevents destruction of cells by phototoxicity, allowing scientists to observe molecular processes they previously couldn’t.

formation in their method and noted that the protein structure of cells remained intact after the procedure. “Thus, the ultrahigh speed of cryo-fixation faithfully arrests a temporal state of dynamic molecular patterns in cells that can be observed at multiple resolutions,” they conclude. 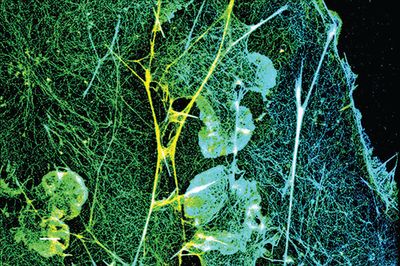 Another new method, recently described in Scientific Reports, that may help researchers avoid damaging sensitive cells due to light-induced heating comes from a collaboration between scientists at the University of Münster in Germany and Italy’s University of Pavia, who created a method for easier calibration of optical tweezers. Optical tweezers use the momentum of light to trap and examine the properties of micro- or nanoscale particles, avoiding the damage caused by other methods. The researchers’ simplified calibration method for this tool allows better measurement of biomechanical properties of living cells, such as viscoelasticity, viscosity, and stiffness—essential for understanding a variety of processes, including how diseases progress.

Scientists at the University of Texas Southwestern (UTSW) and their colleagues in Australia and England are also innovating in light microscopy. They invented an optical device that turns commonly used microscopes into multi-angle projection imaging systems, allowing users to obtain 3D image information at a fraction of the time and cost normally required.

“It is as if you are holding the biological specimen with your hand, rotating it, and inspecting it, which is an incredibly intuitive way to interact with a sample,” said Kevin Dean, PhD, one of the researchers involved, in a press release. “By rapidly imaging the sample from two different perspectives, we can interactively visualize the sample in virtual reality on the fly.”

Advancements in automation and AI

Recent research involving automation and artificial intelligence (AI) is also advancing the capabilities of microscopes. For example, scientists at Woods Hole and their collaborators have solved several confocal microscopy challenges with their invention of a new confocal platform. The platform, which they call multiview confocal super-resolution microscopy, includes deep learning algorithms and solutions from other high-powered imaging systems and boosts the confocal’s volumetric resolution by more than 10 times while reducing phototoxicity.

Other benefits of the new platform include its use of three objective lenses as well as scan heads that allow scientists to easily add line-scanning illumination to the microscope’s base.

“We can interactively visualize the sample in virtual reality on the fly.”

“Many labs have confocals, and if they can eke more performance out of them using these artificial intelligence algorithms, then they don’t have to invest in a whole new microscope,” said senior author and MBL fellow Hari Shroff of the National Institute of Biomedical Imaging and Bioengineering, in a press release about the platform. “To me, that’s one of the best and most exciting reasons to adopt these AI methods.”

Another AI-related development comes from researchers at the University of Gothenburg, who developed a new deep learning method to replace fluorescence microscopy, saving time and expense associated with staining and reducing the risk of chemical interference. Their method essentially mimics the fluorescent staining digitally. According to a press release, the method enables scientists to take images with bright field microscopes and apply Python scripts to produce virtually stained images, allowing for more reproducible and reliable results.

Recent product launches that push the envelope in microscopy include a few of the 2021 winners of the Microscopy Today Innovation Awards announced in September 2021:

A desktop SEM—Thermo Fisher Scientific’s Phenom XL G2—saw remote-site field work in the Selvagens Islands, a Portuguese archipelago in the North Atlantic with almost no permanent human residents. According to Thermo, while most field studies using desktop SEMs involve researchers bringing samples back to temporary labs set up in hotels, the Selvagens Islands research was conducted in a rudimentary field lab powered by a generator on-site.

“Researchers from fields including microbiology, geology, and mineralogy were able to process data efficiently and analyze a wide variety of samples in their native environments. Scientists made significant strides in biotechnology and pharmaceutical research, and findings may also pave the way for future studies using the SEM in space,” the company said in a recent statement.

Field use of portable SEMs is likely to increase moving forward, as newer models are more durable with simpler set up, allowing users to get immediate results on-site, process more samples, and use less sample material.

Another recent application that falls into product territory involves Becton, Dickinson and Company’s (BD’s) work with the European Molecular Biology Laboratory (EMBL) on a new flow cytometer that incorporates a fluorescence microscope capable of extremely rapid image capture and analysis to provide cell sorting based on external morphology of the cells. Until now, cell sorting has been based on fluorescence marker readings, making speed and selectivity a challenge. The high-speed image-enabled cell sorting (ICS) option from the BD/EMBL team introduces high-resolution analyses based on morphology and protein localization, sorting at speeds up to 1,500 events per second, according to a paper in Science.

Overall, the major trends driving advancement in microscopy include developments in AI, automation, and continuous improvements in super-resolution microscopy. Manufacturers continue to add and improve upon AI and automation of their microscopes, allowing for faster imaging, less sample prep, and new capabilities.

For example, Park Systems’ Park FX40 atomic force microscope claims to be the first to automate all up-front set up and scanning processes, while JEOL’s JSM-IT510 also enhances productivity with its automated imaging and montaging features, as well as live EDS analysis. As with new offerings from many other manufacturers, both systems also use AI to further speed up various processes. Similarly, Olympus’ version 3.3 of its scanR high-content screening (HCS) station for image acquisition and data analysis adds a number of improvements involving its deep learning technology for faster image analysis.

Developments in AI-related microscopy research also center on making things faster for end users. In a recent example from the Institute for Bioengineering of Catalonia's (IBEC) Nanoscale Bioelectrical Characterization group, researchers developed a machine learning method that reduced microscope data processing from months to seconds. Meanwhile, others are using AI to improve microscope performance as well as speed. In other research from EMBL, scientists used AI in combination with light-field microscopy and light-sheet microscopy to ensure crisper, more accurate images, while reducing image processing time from days to seconds.

Another key trend includes the widening accessibility of super-resolution microscopy, with recent advancements bringing super-resolution capabilities to standard microscopes. For example, engineers at the University of California, San Diego recently developed a metamaterial that allows regular microscopes to “see” in super resolution.

As these developments progress and scientists continue to advance microscopy, lab processes will likely only continue to get faster and easier, shifting time that would normally be spent on tedious microscopy setup tasks to making the next big discovery.