Vaping devices have become increasingly popular since their introduction to market in the mid-2000s, especially among teenagers and young adults. According to the US Centers for Disease Control and Prevention National Youth Tobacco Survey, just over 53 percent of high school students report having tried a tobacco product, with electronic cigarettes (also referred to as e-cigarettes, vape pens, and hookah pens) being the most common. These products are designed to resemble traditional tobacco cigarettes, containing flavorings, solvents, and often nicotine. The rising popularity of vaping devices has been met with an increase in lung injuries and hospitalizations, as well as growing concern over the potential long-term health effects. A major reason for the widespread popularity of these products among teenagers and young adults is the wide variety of fruit, candy, and other flavors available. While many of these chemicals are considered safe for ingestion, they are now being investigated for their inhalation toxicology and effects on human health. At the Center for Inhalation Flavoring Toxicology at the University of Rochester Medical Center (CIFT), Irfan Rahman, PhD, CIFT director, and his colleagues, are conducting research to understand these effects. 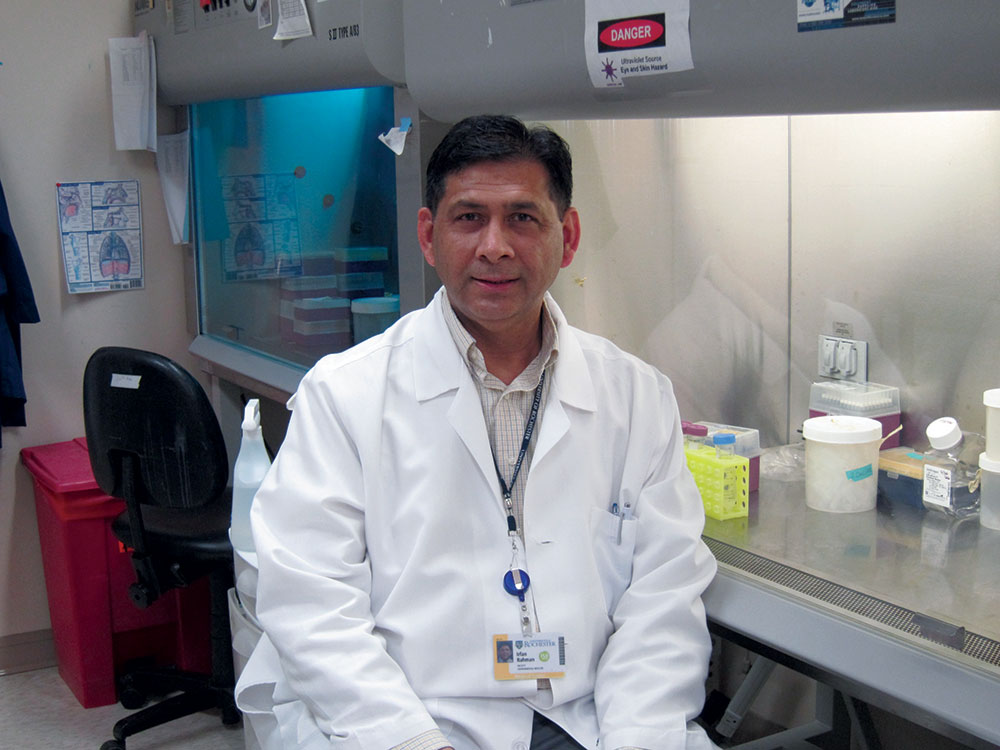 Vaping devices often contain nicotine, and more recently, tetrahydrocannabinol (THC), along with flavoring chemicals such as pulegone and eucalyptol (menthol flavor), diacetyl (buttery flavor), and cinnamaldehyde (cinnamon flavor), as well as propylene glycol and vegetable glycerin as base liquids. These flavoring chemicals and base liquids are generally considered and regarded safe—for ingestion. This is not always the case for inhalation.

“Lungs do not have the capacity to metabolize and eliminate these products to the same degree as the intestinal-hepatic metabolism, as the enzymes (CYP enzyme systems) differ,” explains Rahman. Cytochromes P450 (CYPs) enzymes metabolize xenobiotic substances, such as these flavoring chemicals. CYP3A and CYP2C9 are most widely expressed in the small intestine, whereas CYP2E is prevalent in the respiratory tract.

Once inhaled, these toxic compounds promote oxidative stress and inflammation in the lung epithelium and alveoli where gas exchange occurs, resulting in a form of pneumonia characterized by “lung leakiness with ground glass opacities and patches known as EVALI”, explains Rahman. EVALI (e-cigarette or vaping product use-associated lung injury) is a relatively newly coined term, resulting from an outbreak of lung illness in the United States in August 2019. Symptoms include shortness of breath, cough, chest pain, fever, diarrhea, vomiting, tachycardia, and tachypnea.

“During the EVALI epidemic, many patients were diagnosed with lipoid pneumonia, organizing pneumonia, and eosinophilic pneumonitis,” says Rahman, adding, “these cases were predominantly related to illicit vape cartridge use.” However, the health risks associated with vaping are not exclusive to illicit or adulterated products, as the constituents of legal, widely available products have also been associated with adverse health effects.

Exposure to flavoring chemicals, such as 2,3-Pentanedione and diacetyl can produce a range of health effects, from mild respiratory irritation, to more severe pulmonary effects such as bronchiolitis obliterans (popcorn lung disease), explains Rahman. “Our research has demonstrated significant toxicity by cinnamaldehyde, menthol, and vanillin-containing e-liquid,” he says. 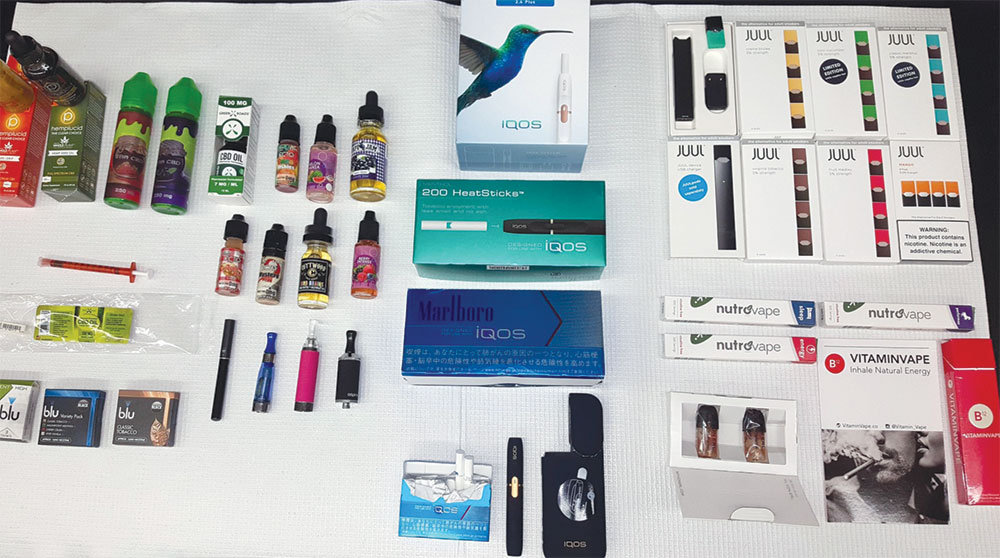 Rahman and his colleagues at CIFT aim to understand the inhalation toxicology of the flavoring chemicals used in vaping products to provide updated toxicity information for emerging flavoring chemicals to the FDA and NIH, and to inform schools and researchers of the associated risks. This is achieved with a combination of pre-clinical and clinical research, and the center works closely with a variety of experts in inhalation toxicology, environmental sciences, lung biology, cancer research, and public health sciences, as well as pulmonologists.

An important aspect of this research is the characterization of the vapor and aerosol phase constituents, which is achieved with gas-chromatography and mass spectrometry (GC-MS). The physiochemical characteristics of the aerosols, including particle concentration and size distribution as well as lung deposition are also important.

Using non-invasive techniques, researchers can assess the health effects of vaping products in human subjects. “In human studies, spirometry is performed to assess lung function of e-cigarette/cartridge users and normal subjects,” says Rahman. “Their exhaled breath condensate, plasma, saliva, and urine are used to determine exposure and disease biomarkers.” Nitric oxide measured in a subject’s breath, for example, is an indicator of lung inflammation, particularly in asthma.

Adverse effects in vitro and in vivo

This combination of in vitro and in vivo research at CIFT produces valuable insights into the inhalation toxicology and human health effects of emerging flavoring chemicals used in vaping products, with implications for consumers and regulators.

In a study designed to assess the immuno-toxicological and oxidative stress effects of flavoring chemicals on human monocytic cell lines, the team identified cinnamaldehyde, vanillin, and pentanedione as having the most toxic effects on monocytes, stimulating the secretion of pro-inflammatory cytokines.

Rahman notes these are not the only flavoring chemicals of concern. “In an acute three-day exposure with menthol and tobacco flavors, we have seen significant changes in differential cell counts of neutrophils and T-cells, and changes in inflammatory mediators,” he says. “These data suggest that flavors can cause pulmonary inflammation and lead to acute lung injury and pathogenesis.”

There is also evidence to suggest these harmful effects are amplified when individuals inhale a variety of different flavors, which is not uncommon in social settings. When the team at CIFT exposed cells to equal proportions of ten different e-liquid flavors mixed together, the cytotoxic effects were enhanced.

These and other deleterious cellular effects can translate into serious health effects among consumers. “Our data suggest that exposure to flavors, flavoring chemicals, and vape cartridges can cause functionally altered immune cells,” he says, which results in dampening of the immune system and inflammatory response. According to Rahman, adverse airway and respiratory effects such as hindered lung function and lung remodeling (a form of fibrosis) are also possible, as is the development of respiratory diseases such as asthma, bronchitis, interstitial lung diseases, acute respiratory distress syndrome, or EVALI.

As the world grapples with the ongoing COVID-19 pandemic, numerous epidemiological studies aim to identify factors and pre-existing conditions associated with COVID-19 susceptibility, as well as severe disease outcome and mortality. Unfortunately, there are several mechanisms that may contribute to increased COVID-19 susceptibility among smokers and vapers.

Smoking and vaping affect the tight barrier junction leading to enhanced epithelial permeability, increasing susceptibility to infection. By increasing oxidative stress, smoking and vaping also have an adverse effect on angiotensin-converting enzyme 2 (ACE2) receptor expression, increasing the number of potential binding sites for SARS-CoV-2. A weakened immune response may also contribute to a greater risk of a hyperinflammatory response to infection, as well as lung remodeling, resulting in damaged lung tissue.

Given the widespread use and increasing popularity of vaping products, understanding the inhalation toxicology and health effects associated with the flavoring chemicals these products contain is essential to reduce the risk of acute injury and respiratory disease development. Ongoing research at CIFT aims to provide accurate data for regulatory bodies, and inform consumers (particularly teenagers and young adults) that an appealing flavor does not necessarily guarantee a safe product.