The biopharmaceutical industry has harnessed the power of gene expression systems, including mammalian cells, non-mammalian cells, and transgenic animals, to produce therapeutic proteins. The United States Food and Drug Administration (FDA) has approved hundreds of therapeutic proteins, encompassing monoclonal antibodies (mAbs), fusion proteins, hormones, cytokines, and enzymes for the treatment of diseases ranging from cancer to autoimmune disease. Protein-based therapeutics may be categorized based on their pharmacological activity, such as replacing deficient proteins, augmenting specific pathways, providing a novel function, interfering with another molecule, or delivering various drugs. These proteins enable more individualized treatment strategies, as they offer a high degree of specificity. Glycosylation is a post-translational modification by which glycans (carbohydrates moieties) are attached at specific sites on the protein. Glycans are a key determinant of pharmacokinetics, solubility, stability, and immunogenicity. Biopharmaceutical manufacturers must characterize and profile glycans to ensure safety and consistency, and rely on techniques including high-performance liquid chromatography (HPLC), mass spectrometry (MS), and fluorescence-tagging.

Therapeutic glycoproteins make up a large portion of biotherapeutic products, and have a US market value estimated in the billions. The technology used to manufacture them, however, is not brand new. “Therapeutic protein manufacturing is a mature technology invoking several cellular hosts or ‘expression systems,’ and a variety of highly effective drugs including monoclonal antibodies and fusion proteins are currently on the market,” explains Andrew Hanneman, PhD, scientific advisor, Biologics, at Charles River.

Therapeutic glycoproteins are post-translationally modified by glycan linking at specific sites on the protein, commonly at nitrogen atoms on asparagine side chains (N-linked) or oxygen atoms on serine or threonine side chains (O-linked). The process occurs subcellularly, within the endoplasmic reticulum (ER) and Golgi apparatus. “Glycosylation is closely associated with protein folding and ‘quality control’ wherein improperly folded proteins are removed from the ER,” explains Hanneman. “Following additional enzymatic glycan trimming within the Golgi, proteins either may or may not retain glycosylation as final active proteins.”

Glycans impact a protein’s safety and immunogenicity, and biopharmaceutical manufacturers often use mammalian cell lines, including Chinese hamster ovary (CHO) cells, as expression systems to produce glycoproteins with glycosylation patterns that are less immunogenic. For example, Siltuximab, Pertuzumab, and Rituximab are FDA-approved monoclonal antibodies generated in CHO cells. Many others are produced in human cell lines, most commonly HEK293 and HT-1080 cells.

Glycosylation Is a Critical Quality Attribute

“Several aspects of glycosylation can profoundly impact a protein’s biological function and of consequence when used therapeutically, may impact its serum half-life and safety/immunogenicity profile, making glycosylation a critical quality attribute (CQA) for many biologics,” says Hanneman. “For example, the terminal sugars of Fc glycans on mAbs have been shown to be critical for the safety or efficacy of many mAbs.” Glycosylation can have direct or indirect effects on therapeutic glycoprotein immunogenicity. The glycan itself may initiate an immune response, or it may alter protein structure, rendering the protein immunogenic. Consequently, biological activity may be impaired.

As a result, glycan profiling has become standard practice in many laboratories, and is often achieved using HPLC. “The exact methods applied will depend on the product development history of the molecule and other specific needs or attributes driving glycan analysis as noted during drug development including challenges with releasing glycans, the need for site-specific profiling, or related issues possibly resulting from regulatory input,” explains Hanneman. He notes that reproducible methods will be essential, especially in regulated laboratory environments.

HPLC and MS are essential for glycan profiling, and they enable different analytical approaches. The “top-down” approach is designed for determination of the intact molecular weight profile, whereas the “bottom-up” approach enables determination of much more detailed glycosylation profiles. “A full suite of top-down to bottom-up glycan analysis approaches are employed at Charles River, mostly employing HPLC in combination with MS,” says Hanneman. He explains the top-down approach as “LC-MS analysis of an intact glycoprotein to directly generate a mass spectrum indicating its glycosylation status or of its subunits.” This direct approach enables calculation of molecular weight differences between peaks, to identify the different types of glycan modifications. A limitation of the top-down approach is its lack of sensitivity. Alternatively, peptide mapping, the bottom-up approach, begins with glycoprotein digestion into glycosylated and non-glycosylated peptide fragments. “Peptide mapping methods are highly informative and may be used in combination with glycopeptide enrichment strategies to provide insights into site-specific glycosylation, including O-linked glycans whose site localization is more difficult than N-linked glycans which regularly appear at well-known consensus-site amino acid motifs,” explains Hanneman, adding: “highly glycosylated proteins such as many enzymes may be subjected to matrix assisted laser desorption/ionization MS due to ‘extreme’ glycan heterogeneity.” Within the bottom-up approach, glycans can be released from glycoproteins either enzymatically (for N-linked glycans) or chemically (for O-linked glycans). Released glycans can be “profiled independent from the protein, which may also provide the best opportunity for detailed structural analysis,” says Hanneman. 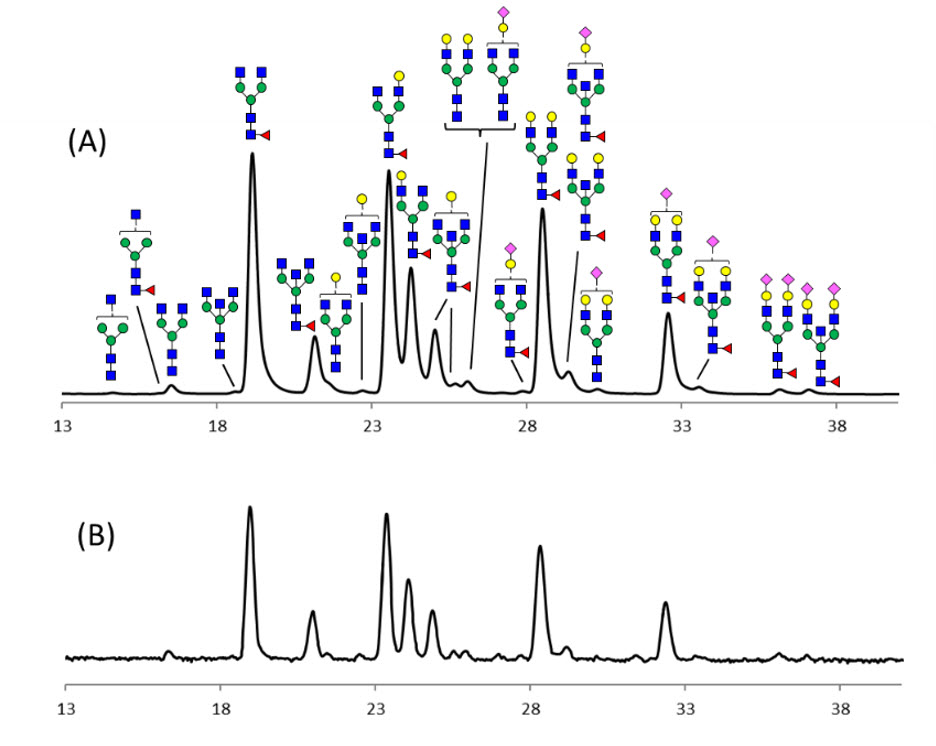 New techniques and technologies continue to emerge, and have undoubtedly influenced glycan analysis. However, Hanneman stresses the value of a less-novel technique: “Although new approaches and technologies appear regularly, it is noteworthy that fluorescence-tagging has probably advanced therapeutic glycoprotein glycan analysis the most by enabling routine HPLC profiling without the need for mass spectrometry or related spectroscopic techniques.” Unlike proteins, glycans do not absorb significant ultraviolet light, and must be labeled with a fluorescent dye for analysis with HPLC. The fluorophores 2-AA (anthranilic acid) and 2-AB (2 aminobenzamide) are widely used for glycan analysis given their stability. The HILIC HPLC profiles of 2-AB labeled N-linked glycans released from human IgG are shown in Figure 1.

According to Hanneman, some inherent characteristics of glycans make them particularly challenging to analyze. “Glycans are branched structures and unlike proteins, their biosynthesis is not DNA template-driven,” he explains, which makes analysis complex “if total characterization of an unknown structure is the goal.” Further, glycans often have multiple structural and stereo isomers, and when combined with different linkage sites, multiple different structures are possible. “This drives the need to accept some limitations in the level of structural detail provided when using routine profiling methods,” says Hanneman, “even if MS is employed, MS/MS fragmentation of branched structures might not be structurally conclusive given the high potential for isomeric structures,” he explains. Developments in MSn can help to address these challenges, as multiple rounds of ion disassembly can help resolve a glycan’s topology.

Fortunately, much of the challenging work has already been completed. “Most glycans from the common well-described biotherapeutic protein expression systems have already been well characterized, including the especially challenging isomeric structures,” says Hanneman. “Therefore, glycan profiling now often involves smooth, quick implementation of routine profiling methods based on fluorescence-tagging, HPLC, and MS and the use of glycosidases.” Some of the aspects that limit data quality and throughput have also been addressed. “Several companies provide consumables to enable rapid and confident analysis of large numbers of samples for laboratories performing cell line development, comparability, and quality control studies,” he says. However, there are always exceptions, as Hanneman notes, “some aspects of sample preparation and data analysis remain non-routine, especially for the most highly-glycosylated or unusual therapeutic glycoproteins.”

The therapeutic protein market shows no signs of slowing down, with thousands of recruiting and active clinical trials underway in the United States. Glycosylation impacts the serum half-life as well as the safety and immunogenicity of a therapeutic protein, and glycan profiling, tracking, and monitoring between lots is essential to ensure safe and effective drugs. Advancements in analytical instruments and techniques are overcoming the challenges of glycan characterization and profiling.