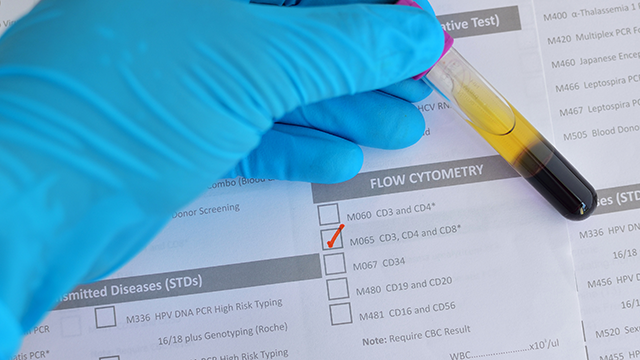 Clinical flow cytometry has become a mainstay in the clinical laboratory as a reliable, rapid, and sensitive method of immunodiagnostics. The technique involves tagging cell surface receptors or intracellular protein biomarkers with fluorophores, which are analyzed by the flow cytometer to produce a distribution pattern of the cell populations present in a patient’s sample. Flow cytometry is used in the clinic for immunophenotyping, i.e., identifying immune cells, to diagnose hematological malignancies, primary immune deficiencies, and to measure CD4+ and CD8+ T-cells count in patients with HIV infection, evaluate cellular DNA content, and to assess the state of the immune landscape after allogeneic bone marrow or hematopoietic stem cell transplantation. It can also be used to monitor the response to treatment in patients, for example, by detecting residual cancer cells circulating in the blood.

Its many strengths and advantages, which include single-cell resolution and multiplexed biomarker identification by a powerful instrument with a suite of analysis software, make the technique ideal for other potential clinical applications. At present, its uses in the clinic have been limited to diagnostics; however, flow cytometry methods for therapeutic applications are emerging, although they are still mostly in preclinical or early phase clinical trials.

FACS, or fluorescence-activated cell sorting, is a specialized flow application, which, in addition to analyzing the fluorophore content and biomarkers on single cells, can sort them based on the desired phenotype. In potential clinical applications, collected cells could then be expanded ex vivo and reinfused into the patient as cell-based therapies.

The ability to multiplex biomarker analysis in flow cytometry is significant because it enables the identification and isolation of immune cells to a very specific phenotype. In addition, the ability to serially analyze single cells can lead to a high purity of sorted cells. This is important for cell-based therapies that need to be free of contaminants by either harmful cells, e.g., cancer cells, or therapeutically ineffective cells, e.g., over-differentiated T-cells. Despite its great potential for cell-based therapies, FACS is presently limited to preclinical and early phase studies for these applications. However, intensive research is aiming to translate this research to the clinic, particularly for sorting immune and stem cells for immunotherapy and regenerative medicine.

FACS can be employed to enrich hematopoietic stem cells (HSCs) from a patient’s blood for autologous re-implantation after high-dose chemotherapy, which ablates the process of hematopoiesis from their bone marrow. In a study of 22 patients with metastatic breast cancer enrolled in a phase I/II trial, FACS was employed to purify HSCs bearing a CD34+Thy-1+ signature for autologous mobilized peripheral blood (MPB) infusion, a process generally considered suboptimal due to contaminating circulating cancer cells. However, adding a FACS sorting step after enrichment of HSCs on an apheresis CD34+ column resulted in a 250,000-fold reduction in cancer cells. Moreover, patients receiving FACS-sorted MBP had longer progression-free survival and overall survival compared to patients who received regular MBP. Although limited in sample size, the study demonstrated the ability of FACS to purify HSCs to a high level for autologous MBP.

Autologous adoptive cell transfer (ACT) is a process of purifying immune cells from a patient’s blood sample, expanding them ex vivo, and reinfusing them into the patient for therapeutic benefit. In cancer patients, this could be reinfusion of cancer-specific antigen (Ag)-activated T-cells or tumor-infiltrating lymphocyte (TILs) to combat hematological or solid cancers. TILs, for instance, occur in a range of phenotypes, from the immature and least differentiated stem cell memory T-cells (TSCMs) to the terminally differentiated effector T-cells (TEFFs). Studies have shown a correlation between clinical outcome in ACT with reinfusion of less differentiated cells suggesting that sorting TILs to enrich them in TSCMs, or other less differentiated forms, prior to reinfusion could improve survival outcomes for patients. FACS could potentially accomplish this task, although this is still under development in preclinical models.

A novel therapy, called chimeric antigen receptor-modified T-cells (CAR-Ts) has recently been approved by the FDA to treat relapsed or refractory diffuse large B-cell lymphoma and B-cell precursor acute lymphoblastic leukemia. This process involves obtaining T-cells from the patient and modifying them genetically to express a surface antibody specific to a cancer Ag fused to a protein domain that activates the T-cell. The CAR-Ts are then expanded and reinfused into the patient as an immunotherapy to target cancer cells. Various T-cell subsets differ in their efficacy and lasting effect in vivo as CAR-Ts; consequently, sorting T-cells by FACS prior to their genetic manipulation could boost their efficacy in patients, although this is still in the research stages. Additionally, flow cytometry can be used to characterize CAR-Ts and their expression level of antigens.

Stem cells retain the ability to differentiate into a variety of different cell types and are therefore of potential use in regenerative medicine, either to treat degenerative diseases, congenital conditions, or for tissue damage from injury. The list of potential applications for stem cells (embryonic, induced pluripotent, neural, placental, or mesenchymal) is staggering, with numerous on-going clinical trials testing stem cell therapies for bone, cardiovascular, immune, and neurodegenerative diseases, to name a few. FACS is well suited for sorting stem cells, which is extensively used in research studies, but its clinical applications are still in the nascent stages of development. Presently, flow cytometry can be used to verify the phenotype of cultured or isolated stem cells.

FACS is an antibody-dependent technology and is therefore limited in its clinical applications by the availability of antibodies conforming to good manufacturing practice (GMP). Cells sorted by FACS can also suffer shear- or electrically-induced damage. This problem can be mitigated by newer formats of cell sorting, such as microelectromechanical systems (MEMS) in tandem with a flow cytometer. An issue facing all cell-based therapies in general is the labor intensity of culturing cells, which limits the production volume. A potential solution would be for existing automated cell culturing systems to be integrated with sorting machines for a seamless process from automated culturing to automated sorting. Overall, many of these limitations are technical in nature. Improvements could increase the applicability and output of FACS for cell-based therapies.

Masha G. Savelieff, PhD, is a full-time science writer and co-founder of Scigency Science Communications. She obtained her PhD in Chemistry at the University of Illinois at Urbana-Champaign and performed research in medicinal chemistry, Alzheimer’s disease, and cancer biology before becoming a full-time writer.