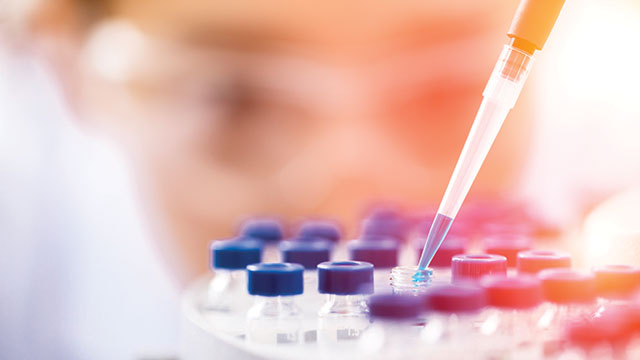 Biomarkers are a large and growing business. According to research firm Market Research Future (Pune, India), the global biomarker test market will reach $16 billion by 2022, which represents an annual growth rate of 14.5 percent between now and then. Oncology is by far the largest segment, with a projected value of $5.4 billion.

The U.S. Food and Drug Administration (FDA) has great interest in biomarkers as they relate to the effectiveness of the products it reviews. Shashi Amur, PhD, scientific coordinator at the FDA’s Center for Drug Evaluation and Research, defines a biomarker as “a characteristic that is objectively measured and evaluated as an indicator of normal biological processes, pathogenic processes, or biological responses to a therapeutic intervention.” Although radiology scans qualify as biomarkers, most discussions focus on chemical species quantified in clinical or laboratory tests.

Since biomarkers play such a significant role in how doctors treat patients and increasingly in how drugs are approved, validation and qualification of biomarkers have become a big deal, particularly for emerging oncology treatments. Targeted cancer drugs have created an urgent need for pharmacodynamic (PD) biomarkers that rise or fall in response to drug treatment. The FDA defines a PD biomarker as one “used to show that a biological response has occurred in an individual who has been exposed to a medical product or an environmental agent.” These agents are incredibly expensive and cause significant side effects. For reasons of economics and patient safety, drug developers are encouraged (and in many cases required) to validate biomarkers that identify patients likely to benefit from these costly regimens and confirm that the drug is working.

The FDA is excited about companion PD biomarkers that can provide a scientific basis for actionable, go/no-go decisions. During the long drug commercialization process, PD endpoints inject a degree of objectivity and quantitation that guide developers and improve their ability to test hypotheses even before the first human subject is enrolled.

THE MORE THE MERRIER

Market pressures dictate expedited drug development, and this incentivizes pharmaceutical companies to obtain as much information as possible early in the development process. One strategy toward this end is to design early-phase clinical trials that achieve multiple objectives within a single protocol, thus reducing the time necessary to reach late-phase trials. Such early-phase clinical trial designs combine food effects, pharmacokinetics, pharmacodynamics, drug-drug interaction, bioequivalence, bioavailability, age and gender studies, and others. The FDA outlined many of these strategies, including the use of biomarkers in general, and in particular PD biomarkers, in its 2006 Critical Path Initiatives directive.

The more biomarkers available for a particular study and the greater the number of systems or targets they interact with, the more reliably one can assume a drug is working. Multiplexing many assays into one increases the information derived from each sample, conserving sample volume and reducing operating cost. It also allows analysis of several PD biomarkers from the same sample, thus improving the statistical reliability of results.

The Cira biomarker analysis platform from Aushon BioSystems (Billerica, MA) achieves multiplexing and sensitivity (through chemiluminescence) down to femtogram-per-milliliter levels and wide dynamic range. “Femtograms per milliliter is about a thousand times more sensitive than standard ELISA assays,” says Aushon CEO Susan Vogt, “with a dynamic quantifiable range of 4.5 log, compared with 2 log for ELISA. Many pharmacodynamic biomarkers, like cytokines, exist below detection levels of conventional ELISAs. Quantifying these molecules helps establish baseline markers in ways that were previously unachievable.”

Aushon has published data comparing quantitation of cytokines on its Cira platform with ELISA detection. Cira is used primarily in clinical trials and drug development, although some Aushon customers are evaluating it for diagnostics. The combination of high precision and wide dynamic range makes the platform attractive for quantifying pharmacodynamic biomarkers, according to Vogt, particularly for detecting minute changes in soluble biomarkers to determine possible correlates of protection, inflammatory responses, and novel signaling pathways activated in various matrices.

“The technical issue for pharmacodynamic biomarkers is their typically low concentrations in patient specimens,” says Vogt. “If they are expressed at very low levels in normal patients or [are] expected to be suppressed by drug treatment, then they can only be measured with an ultrasensitive technology. And in many cases, the measurement of multiple biomarkers may be impractical without multiplexing technology.”

A validated PD biomarker can go a long way toward facilitating regulatory approval of new drugs. In late 2017, Amicus Therapeutics (Cranbury, NJ) received an FDA orphan-drug license for its Pompe disease therapeutic, in large part due to studies demonstrating significant improvements in Hex4, a PD biomarker. Arising from the buildup of glycogen in cells, Pompe causes incapacitation and early death. It affects fewer than 9,000 individuals in the U.S.; hence the “orphan” designation.

Additional liver enzyme biomarkers indicate muscle damage. “These enzymes leak out of damaged muscle,” says Jeffrey P. Castelli, PhD, senior VP for portfolio planning at Amicus. Although glycogen and liver enzymes are measured routinely in patients who do not suffer from Pompe, their utilization as biomarkers for an orphan disease is far from straightforward.

“While biomarkers in rare diseases are often valuable for assessing pharmacodynamic effects early in development, the challenge is finding biomarkers that can be validated and tied directly to clinical benefit,” Castelli explains. Diseases where an excess or reduction in a biomarker is actually causative—say, blood glucose in diabetics—are the easiest.

The relevance of PD biomarkers extends to earlier phases in the drug development process. Siamab Therapeutics (Newton, MA) recently announced preclinical data for its antibodies and antibody-drug conjugates targeting tumor-associated carbohydrate antigens (TACAs). TACAs, which are found on the surfaces of many solid tumors, are implicated in immune suppression, chemoresistance, and the emergence of cancer stem cells. Elevation of STn, one particular TACA expressed by most ovarian tumors, is associated with tumor metastasis and reduced survival.

Dan Dransfield, PhD, executive VP for R&D at Siamab, explains the relevance of STn. “It is the therapeutic target. Preclinical studies have demonstrated that there is a decreased level following administration of our anti-STn antibody drug conjugate as measured by both immunohistochemistry and flow cytometry.” The biomarker can be assessed using a sandwich ELISA incorporating Siamab’s selective anti-STn antibodies. STn levels that do not decrease after treatment suggest an alternate pathway for tumor cell killing, Dransfield adds, “but we have not observed this to be the case from our preclinical studies.”

Siamab is interested in STn assays that could serve as a companion diagnostic as well as a PD biomarker, and that might help select study-eligible patients. Dransfield believes that both the serum- and tissue-based assays could be utilized for PD marker assessment and patient stratification. “In the latter case, we have tied anti-STn efficacy to levels of STn in preclinical models, where anti-STn therapy leads to a decreased level of STn in mice.”

WHEN IN DOUBT, ORDER OUT

Outsourcing has become standard procedure in pharmaceutical manufacturing and development. Today this practice extends to analytical method and assay development, including biomarker discovery and validation.

Afshin Safavi, PhD, global chief scientific officer at BioAgilytix, notes that outsourcing clinical biomarker studies is riskier than standard analytical contract work. Regulations are not as established as they are for GMP manufacturing or even GLP animal studies. “The current industry standard for exploratory biomarker validation is based on the fit-for-purpose concept that was introduced about a decade ago,” Safavi says. But aren’t “good practices” sufficient to guide discovery and validation of PD biomarkers?

“The answer is yes and no,” says Safavi. “Yes, current approaches behind fit-for-purpose biomarker validation are sufficient as long as the scientific team understands the context for which the assay is being validated and used and includes the validation parameters that are critical to that particular clinical study.” But he answers no for situations where the team undertakes the biomarker study and validation blindly, treating it as a routine, check-box exercise.

Safavi notes that more than 95 percent of soluble PD biomarker studies use commercial kits and standard analytical platforms. “These kits are usually developed for general use and therefore may need some level of optimization, such as adding more calibrators and/or replacing the kit controls in a buffer with controls that mimic the sample matrix.”

“On the other hand, some studies—five percent or less in my experience— do develop their own biomarker assays from scratch and may pursue for some of those assays an IP around it, especially if the goal is to eventually progress these biomarkers and use them in the diagnostic arena.”

“The strategy of outsourcing biomarker work has been beneficial to the pharma and biotech industry, as it helps them minimize the purchase of various technologies needed to support biomarker studies and keep their internal teams focused on putting more potential lifesaving drugs in their pipeline,” Safavi adds. “I do not see the trend to outsource biomarker work slowing down and strongly believe it will continue to grow even more.”