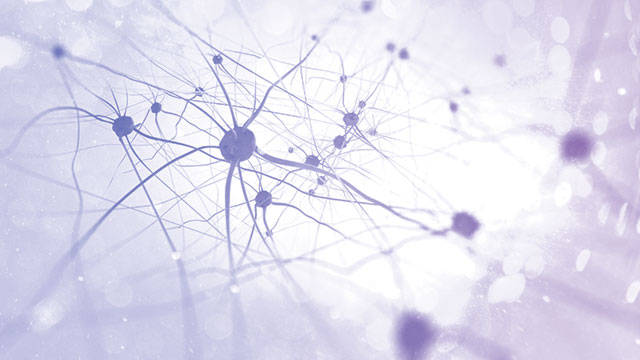 No longer are researchers limited to rare primary cells that die after a few generations, or genetically unstable transformed cells. Thanks to iPSCs, investigators can research any cell type, limited only by their expertise in assay creation.

Axol Bioscience (Cambridge, UK) derives its name from Axolotl, a Mexican salamander that regenerates limbs and heals wounds without developing scar tissue. Company founder Yichen Shi, PhD, earned his doctorate at the Gurdon Institute at Cambridge, named for Sir John Gurdon who co-discovered iPSCs and shared a Nobel Prize for his work in 2012. Collaborating with another Cambridge-based company, Horizon Discovery, Axol applies gene-editing technology to create disease models from these cells.

Why not simply reprogram cells harvested from individuals with the diseases in question?

Shi explains the challenges of collecting large numbers of samples from such patients, especially for commercial research: “It is much easier to introduce defined genetic modifications with tools like CRISPR into iPSC lines.” This approach enables highly controlled studies of disease-related genes. “It allows us to analyze phenotypic differences among cells of identical genetic background except for the induced mutations.”

Axol intends to become the go-to supplier of iPSC-derived neuronal cells, delivered in configurations that allow users to determine the assay format. Yet Shi notes that “physiologically relevant disease models are only half the battle in drug discovery. Success depends on a robust, reliable, physiologically relevant assay that represents real-world pathophysiology.”

Last year, STEMCELL Technologies (Vancouver, BC) entered into a licensing agreement with the Institute of Molecular Biotechnology (IMBA) of the Austrian Academy of Sciences for commercial rights for cerebral organoid culture, and developed the STEMdiff™ Cerebral Organoid Kit.

Organoids are three-dimensional multicellular structures that mimic living tissue—in this case the brain. Thus, they provide a convenient platform for modeling neurological diseases. Specifically, the organoids recapitulate early human embryonic brain development. IMBA scientists have already used them to model microcephaly, with the expectation that they will serve as additional neurologic disease models.

Cerebral organoids complement STEMCELL’s existing portfolio of products for neural cell culture, including the NeuroCult™ and STEMdiff product lines, together with the new BrainPhys™ Neuronal Medium.

“Cerebral organoids aim to recapitulate in vivo brain development and therefore contain a wide variety of cell types,” says Erin Knock, PhD, a scientist at STEMCELL. These include neural precursors, neuronal subtypes from various brain regions, and glia. Organoids produced using the Lancaster protocol, for example, contain neurons from both the dorsal and ventral cerebral cortex, including both inhibitory and excitatory neurons.

STEMCELL uses a special medium, BrainPhys, for growth and maturation of mature neurons, not specifically for neuronal stem cells. “It’s formulation mimics elements found in cerebral spinal fluid, which is what these cells are normally exposed to in the brain,” Knock adds. “Because this environment better represents the brain’s extracellular environment, neurons cultured in BrainPhys show improved synaptic activity compared [with] those cultured in alternative neuronal media.”

Because of their similarity to early fetal brain tissue, cerebral organoids have been best used to study neural developmental disorders like microcephaly, Miller-Dieker Syndrome, and Autism Spectrum Disorder. They can also model neurologic effects of Zika virus infection, which sometimes results in microcephaly.

“But neurodegenerative diseases such as Alzheimer’s, Parkinson’s, and Huntington’s will require innovations in 3-D cell culture to improve the maturation process of organoids to better model events beyond early embryonic stages,” Knock says. Another advancement will be development of cocultures incorporating additional cell types, such as endothelial cells and microglia, to 3-D cerebral organoid systems.

Researchers from the Francis Crick Institute (London, UK) have used iPSCs derived from human skin to learn how some motor neuron diseases begin and progress at cellular and molecular levels. The team, headed by Drs. Sonia Gandhi and Rickie Patani, both group leaders at Crick and consultant neurologists at the National Hospital for Neurology, are working with pharmaceutical companies to discover new treatments for motor neuron diseases, particularly amyotrophic lateral sclerosis (ALS).

The research, published in Cell Reports, shows how the function of astrocytes, healthy motor neuron-supporting cells, may become impaired in ALS, highlighting their role in neurodegenerative diseases.

Researchers harvested skin cells from healthy volunteers and patients carrying the genetic mutation that causes ALS and transformed them into iPSCs. They then guided the cells to differentiate into motor neurons and astrocytes in a way that closely resembles specific regions of the spinal cord from which motor neurons arise.

The team first induced neural conversion, then turned the neural precursors into cells common to the spinal cord domain from which motor neurons arise. From this point, differentiation diverges for spinal cord motor neurons and astrocytes. 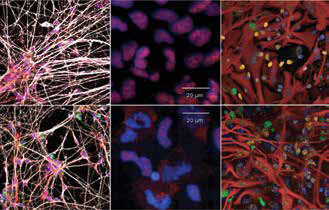 Left column shows healthy human motor neurons (top) and VCP-mutant ALS motor neurons (bottom; dying cells appear green). Middle column shows a protein known as TDP-43 stays in the nucleus of healthy cells (top) but leaks out in VCP-mutant cells (bottom) causing a sequence of pathogenic events that damage several crucial parts of the cells’ machinery. Right column shows that healthy astrocytes can somewhat rescue VCP-mutant motor neurons (top; dead cells appear green), while VCP-mutant astrocytes fail to support survival of VCP-mutant motor neurons (bottom) to the same degree as healthy astrocytes.By tracking healthy and disease-prone motor neurons over time, the scientists found that the protein TDP-43 leaks out of the nucleus of disease-prone neurons, causing a chain reaction of damage to crucial components of the cell’s machinery, leading to cell death. By modelling ALS in this manner Gandhi and Patani identified events occurring early in disease onset, before neurons showed signs of stress. A potential therapeutic intervention might involve preventing TDP-43 from exiting the nucleus, removing it entirely from the cytoplasm, or replenishing it within the nucleus.

Cell-based assays can take a variety of forms. “We deliberately developed an adherent culture that is more amenable to phenotypic assays and RNAseq,” says Patani. “This approach minimizes heterologous cell-cell interactions that may exist in suspension culture and thus allows cell-autonomous phenotypes from highly enriched cultures to be detected more easily. We appreciate that organoid culture is gaining real momentum now and are exploring this as a future possibility in our experiments.”

She mentions a potential hurdle to translating these findings to human ALS. “Human iPSC derivatives likely represent a fetal maturational state and so this is a potential consideration here. Also, we are studying enriched populations of particular cell types. While this allows us to resolve issues of cellular autonomy optimally, it does not recapture the multilineage in vivo setting in which diverse cellular interplay may also contribute to disease development and progression.”

No approved treatments exist for traumatic brain injury except for physical rehabilitation. Neural stem cell transplantation into the injured brain, if effective, would therefore fill a significant medical need.

Neuralstem’s technology enables commercial-scale production of multiple types of central nervous system (CNS) stem cells, which are under development as potential therapies for CNS disorders and as disease models for testing small-molecule drugs. Screening against the company’s human hippocampal stem cell line has led to the discovery of molecules that Neuralstem believes may stimulate the brain’s capacity to generate new neurons, potentially reversing CNS conditions.

The cells are produced using proprietary methods and retain their capacity to expand as a multipotent population and differentiate into physiologically relevant neurons and glia. “Because they are derived from the CNS during fetal development they retain their commitment to region-specific neural differentiation, which provides a significant safety benefit in the development of cell therapies,” says Tom Hazel, PhD, senior vice president of research.

Because of the role of hippocampal neurogenesis in these processes, Neuralstem initiated a program for screening small-molecule compounds with neurogenic activity that have the ability to cross the blood-brain barrier. “We used a cell line derived from the hippocampus to perform this screen, and the lead compound that resulted was NSI-189, which is currently in clinical trials for the treatment of major depressive disorder,” Hazel tells Lab Manager. Results of the Phase 2 study are expected in the third quarter of 2017.

Not all such potential therapies target new cell generation. A benefit of using stem cell lines for screening is the ability to generate practically unlimited numbers of cells for screening. “We can screen for compounds that act at any point in the lifecycle of neurons or glia,” Hazel adds. “We can use high-content analysis to evaluate the effects of drug candidates on a broad array of endpoints, including synapse formation and protection of neurons against toxic insults. These cells are also an ideal platform to screen for safety and toxicity during the drug discovery process.”

Neuralstem is also working with models of neurodegeneration based on differentiated human neural stem cells in culture, any of which could be leveraged to screen for neuroprotective compounds. Among these are in vitro models for exposure to beta-amyloid peptide for Alzheimer’s disease, and other toxic conditions that induce neuronal cell death.