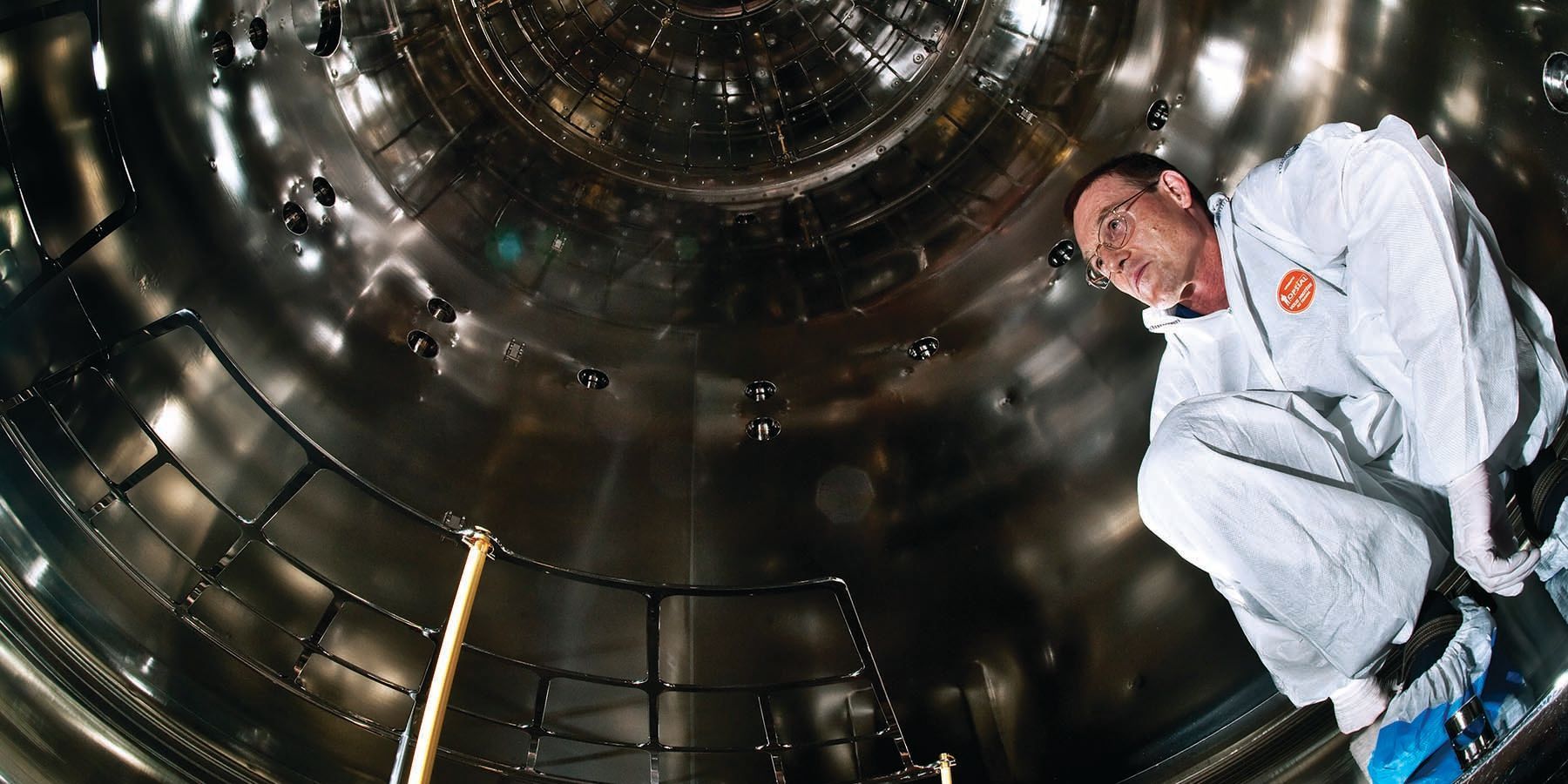 View inside the CLOUD chamber with Jasper Kirkby, head leader of the project.
Maximilien Brice, CERN

Reducing the effects of climate change to our planet is considered by many to be one of the greatest scientific challenges of this generation. Climate change can influence ocean acidity, sea level and temperature, the frequency of extreme weather events, and more. However, due to many variables and factors that are difficult to analyze, current climate models vary in their projections on the severity of how the planet will be impacted in the years to come.

Clouds, which cover more than two-thirds of Earth, play a crucial role in the warming and cooling of the planet. But clouds are still difficult to study, as they are constantly changing. Depending on their altitude, whether it is day or night, or how reflective they are during a given time period are just a few factors that affect clouds’ influence on the climate. Clouds also have the dual capability of either shading the planet—creating a cooling effect—or trapping heat. These factors vary depending on where you are in the world, as well.

It is known, however, that aerosols (suspended particles in the air) help form clouds. “If there were no aerosol particles in the atmosphere, there would be no clouds in the sky,” says Jasper Kirkby, CERN Cloud Experiment spokesperson. Aerosols have become an area of interest for researchers aiming to better understand cloud formation, and the role clouds play in the Earth’s climate.

In the simplest of terms, clouds form when water vapor condenses onto aerosols, which are either primary  (dusts, sea salt crystals, or black carbon) or secondary particles (formed directly in the air from condensable vapors such as those released by plants). Aerosols can also originate from human activities. Increases in emissions of vapors such as sulfur dioxide from fossil fuels lead to additional aerosol particles in the atmosphere. Understanding the source of aerosol particles is an important factor in furthering our knowledge of clouds and climate, and needs to be understood “very precisely,” according to Kirkby. If this can be accomplished, then researchers can better predict what conditions were like in the pre-industrial atmosphere. The results will help determine how human activity has influenced cloud formation throughout the years.

“For greenhouse gases like carbon dioxide (CO2), we can measure the changes over the industrial period because we can drill ice cores and analyze the the CO2 trapped in bubbles. But there’s no way to measure clouds back in 1700. So, we need to learn everything possible about the formation of aerosol particles and cloud seeds, and then use climate models to predict pre-industrial cloudiness,” says Kirkby. With this knowledge there will be a complete picture of the changes so far in greenhouse gases and cloud cover from human activities, leading to sharper projections of future warming.

Kirkby launched the Cosmics Leaving Outdoor Droplets (CLOUD) experiment at the CERN particle accelerator center in Geneva about two decades ago, leading an interdisciplinary team from 21 institutes across nine countries that are focused on studying aerosol and cloud formation. The team, which represents diverse disciplines within chemistry and physics, developed what is known as the “cleanest box in the world” to conduct simulations. The “box,” or CLOUD chamber, provides the team with the capability to precisely control all conditions of the atmosphere and trace vapors within the chamber, which Kirkby points out, “is at the technological limit.” By simulating any atmospheric conditions, including sunlight from several light sources and cosmic rays from a CERN particle beam, the team is measuring the fundamental chemical and physical processes of aerosol and cloud formation. 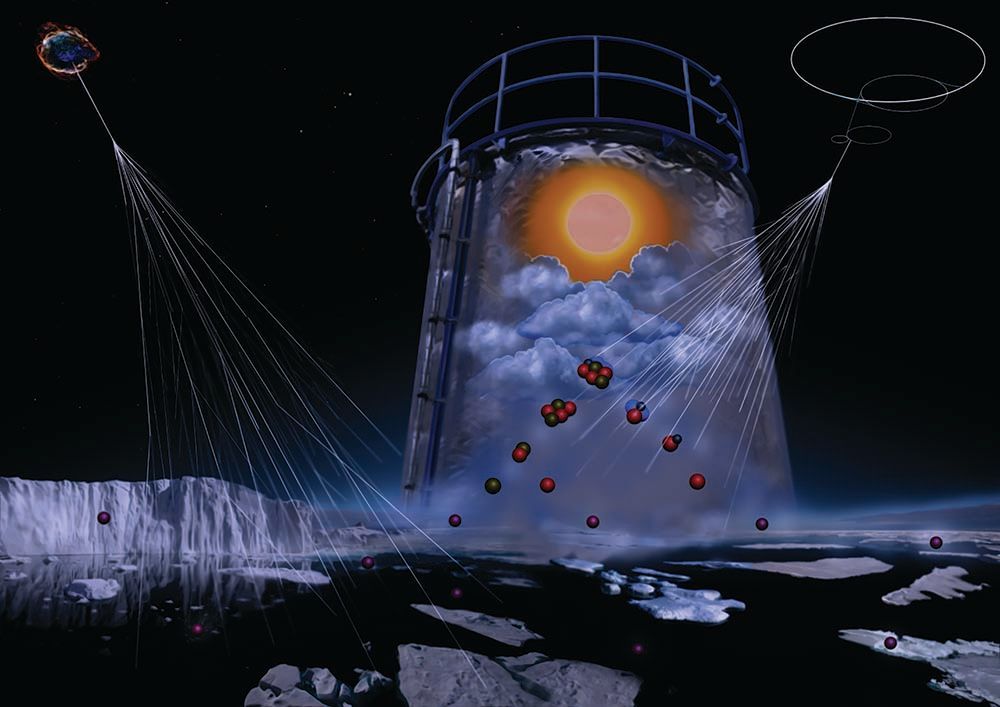 Iodine emitted from the sea and ice is converted by ozone and sunlight into iodic acid and other compounds. These form new particles and increase clouds, warming the polar climate. Cosmic rays strongly enhance the particle formation rates.
Helen Cawley, CERN

One recent finding that came out of work done with the CLOUD chamber was published in the journal Science earlier this year. The research highlights the important role iodine has in aerosol formation, especially within polar regions, and how this new knowledge could improve climate model projections for these regions, according to a press release on the study. As the release explains, aerosol particles over the sea are thought to originate mainly from certain sulfur compounds that are released from phytoplankton and react to form sulfuric acid.

But every liter of seawater contains .05 milligrams of iodine. Some of this is released to the atmosphere, where it forms iodic acid forms through the action of sunlight and ozone. The CLOUD team investigated how iodic acid plays a role in cloud formation by simulating atmospheric conditions in mid-latitudes and arctic regions in the CLOUD chamber. They found that aerosol particle formation by iodic acid takes place much more rapidly than particle formation of sulfuric acid and ammonia under comparable conditions.

"A vicious circle may have been set in motion here: The pack ice thaws, which increases the water surface area and more iodine enters the atmosphere. This leads to more aerosol particles, which form clouds that further warm the polar regions. The mechanism we found can now be included in climate models, because iodine may play a dominant role in aerosol formation, especially in the polar regions, and this could improve climate model predictions for these regions,” explains Joachim Curtius, professor from Goethe University Frankfurt, who also helps lead the CLOUD experiment.

While the research highlighted above is imperative to better understanding the fundamentals of cloud formation, and how this contributes to more accurate climate models, the question now still remains: what can humans do to limit the adverse effects of a warming climate?

In March, the National Academies of Science, Engineering, and Medicine released a report recommending that the US, in coordination with other nations, boost funding for research examining solar geoengineering to help cool Earth’s atmosphere. Specifically, the report authors recommend an investment of up to $200 million over the next five years. As the report explains, solar geoengineering strategies aim to cool the planet through a few different ways—by adding small reflective particles to the upper atmosphere, by increasing reflective cloud cover in the lower atmosphere, or by thinning high-altitude clouds that can absorb heat.

For example, the Climate Intervention Biology Working Group since 2019 has been investigating a climate intervention strategy known as stratospheric aerosol intervention (SAI), which would reduce some of the sun’s incoming radiation by reflecting sunlight back into space, similar to the aftermath of large volcanic eruptions. If this idea became a reality, it would be possible to continuously replenish this “artificial cloud,” and control its formation and location to maintain the desired temperature. The group published a paper on this proposed idea in the Proceedings of the National Academy of Sciences (PNAS) in April, although they admit extensive further research is needed before this could be a potentially feasible option.

The National Academies report echoes the message of the PNAS paper, acknowledging that the use of solar geoengineering methods could have dangerous, and unknown, outcomes. The authors promote the idea of gathering information to determine whether geoengineering methods could be a feasible solution to climate change challenges. “This report concludes that a strategic investment in research is needed to enhance policymakers' understanding of climate response options,” it reads.

Whether or not solar geoengineering projects offer promising solutions remains to be seen. What is known, however, is that researchers’ understanding of the fundamentals of cloud formation is crucial to getting a better grasp on how Earth’s climate is shifting. This insight will guide scientists toward the right solutions to keep Earth’s atmosphere and climate in more of a balanced state.