Alcohol. Yogurt. Kimchi. Soy sauce. You name it: fermented foods are now a huge part of our diet. Attributing to their purported health benefits, they are also becoming more popular. Have you ever wondered what goes on during fermentation and the role of microorganisms in this process? This article provides a short historical walkthrough of fermentation, followed by a discussion on how modern biotechnologies can help make your favorite fermented food tastier.

Wine fermentation was documented as early as 7000 BC. In the old days, wine producers typically crushed fruits with their feet before leaving them to sit in containers. The transfer of microorganisms from the feet of wine producers to crushed fruits was hypothesized to cause fermentation. In the 17th century, the hypothesis was validated when the invention of high-quality optical lens allowed visualization of single-celled microorganisms for the first time. Through a series of experiments, Louis Pasteur, a French microbiologist, showed that wine fermentation is caused by a type of fungi known as yeasts (and we do have a lot of them on our feet, gulp!)

In 1856, an accident at a sugar beetroot distillery led to a groundbreaking discovery that was pivotal to subsequent production of cheese and yogurt. Pasteur was tasked to investigate the issue and found that instead of alcohol, the “spoiled” beetroot mixture contained mostly lactic acid, which caused a sour taste. The sour beetroot mixture also contained many objects smaller than yeasts. These objects were later confirmed to be lactic acid bacteria. This serendipitous incident was instrumental to our modern day understanding that fungi and bacteria perform fermentation differently.

It was not until the early 1900s that Nobel Laureate Eduard Buechner discovered that fermentation can occur with cell-free yeast extracts consisting only of enzymes, contrary to what Pasteur proposed. Since then, we have produced a variety of fermented foods including the popular Kombucha. Although our ability to control fermentation is reasonably understood, there are still many ways industrial fermentation can be improved. For example, modern gene sequencing, genetic engineering, microfluidics, and electronic “nose” technologies can make our favorite fermented foods even tastier. 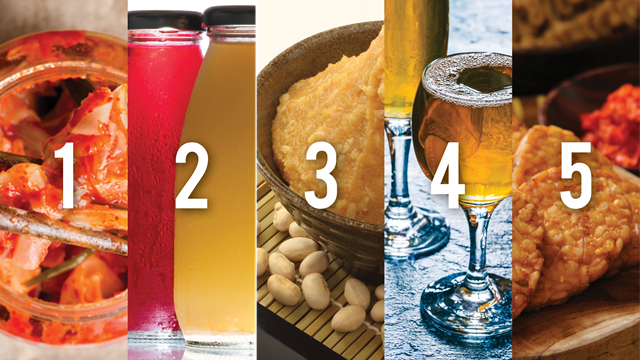 1. Kimchi: Common in Korean cuisine, and made from fermented vegetables like cabbage and radish.

3. Miso: A Japanese seasoning or paste made from fermenting mashed soybeans and grains mixed with salt.

4. Mead: An alcoholic beverage made from fermenting honey with water, and can also include fruits, spices, grains, or hops.

5. Tempeh: The product of fermenting cooked soybeans, which binds the soybeans into a cake-like form.

During different stages of fermentation, the ratio of microbial populations can change with slight shifts in temperature and pH. Consider Kimchi, a traditional Korean food. Kimchi is usually produced by fermenting cabbage with lactic acid bacteria. However, different strains of lactic acid bacteria thrive at different pH ranges. For instance, Lee and colleagues found that during early fermentation (pH 4.27-5.64), Leuconostoc mesenteroides dominates, but as the environment becomes more acidic (pH 4.15), Lactobacillus sakei becomes the dominant lactic acid bacteria strain. Small environmental changes can drastically alter food consistency and quality, and there is a need to monitor microbial populations during fermentation.

DNA sequencing technologies are extremely useful to identify fluctuations in microbial populations. Each microorganism has its unique DNA make-up, just like how our fingerprints are unique to each of us. Researchers have made use of DNA sequencing tools to map out the genomes of many life forms, including that of microorganisms crucial for fermentation. Recent technological advances have also accelerated the speed of DNA sequencing and have rapidly driven down costs, making DNA sequencing more affordable for use in the food industry.

A few companies have tapped into DNA sequencing technologies to optimize their fermentation process. Beer Decoded sequenced yeast strains in 39 brands of beers from five countries to help discover new beer and promote production consistency. The data is also open-access and can be especially useful to small, independent microbreweries that are unable to conduct comprehensive studies. Through DNA sequencing, Kikkoman, a Japanese producer of soy sauce, also had a surprising finding. They found that besides the common fermentation helpers, lactic acid bacteria and yeast, two types of Koji mold were also crucial for fermentation. Recently, a group of Chinese researchers took DNA sequencing technology a step further by quantifying the proportion of various microorganisms at 11 different stages of shrimp paste fermentation. The team believes that their work can enhance quality control and food safety during shrimp paste production.

Genetic engineering (or modification) refers broadly to the cutting and pasting of the DNA genome to create cells with targeted traits. The efficiency of genetic engineering has improved with advanced gene editing techniques like CRISPR.

Genetic engineering has enabled the creation of microorganisms with more desirable traits than their wild-type cousins. For instance, Yu and co-workers generated a strain of Clostridium tyrobutyricum that produced higher yield of butanol, a type of sugar found in many fermented food, than its wild-type cousins. Microorganisms can also be genetically engineered to produce just one end-product with high purity. This makes them more advantageous than their wild-type counterparts, which usually produce a mixture of end-products. Companies typically prefer only one end-product to avoid having to perform any downstream separation, which can be expensive and technically challenging.

Traditional industrial-scale fermentation is performed in large bioreactors with capacity of a few thousand liters. This process is expensive and incompatible with quick testing of the next fermentation recipes. Droplet bioreactors, on the other hand, facilitate rapid fermentation as it confines raw ingredients and microorganisms together in tiny droplets of a few micro-liters to speed up fermentation.

Nevertheless, a major drawback of droplet microfluidics is that its production rate is (excruciatingly) slow. For instance, with the microfluidic wine bioreactor that Attinger and team has created, it will take close to nine years to produce a bottle of wine. At the moment, droplet bioreactors are most useful for testing new fermentation recipes and conditions. Do not expect them to replace traditional brewers anytime soon.

Earlier, we discussed the utility of genetically-modified microorganisms and how they have contributed to make fermented food production cheaper and more efficient. However, it is becoming increasingly clear that genetically-modified microorganisms behave differently when they are grown in a laboratory flask or industrial brewers. One factor causing this divergent behavior is the difference in physical stress they encounter.

Recall the most recent time you went swimming. Do you remember experiencing lower pressure at the water surface and rising pressure when you go deeper into the pool? This also happens to microorganisms swimming in large brewer. Microorganisms at the bottom experience much greater hydrostatic pressure. When this happens, they can burst and die. Others could undergo genetic or metabolic changes, thus sabotaging previous genetic engineering efforts. This is a huge problem for the food industry.

Researchers have tried to address this problem by building microfluidic bioreactors that can handle volumes up to a few liters. These microfluidic bioreactors function just like an industrial brewer but as a scaled-down version. Microorganisms can be grown in these scaled-down bioreactors and subject to different sensor-controlled pressures, stirring rates, temperatures, and pH. Next, by collecting data on the growth of microorganisms and product yield under these conditions, researchers can use this information to optimize fermentation in a scaled-up brewer. This can help realize industrial-scale production of new fermentation recipes.

Our sense of smell and taste are intricately connected. Unfortunately, because of this, some people avoid tasty fermented food because of its smell. What if there is a way to remove the pungent smell while maintaining the tastiness of fermented food? This motivated Yan et al. to design an electronic “nose” for detecting volatile compounds from shrimp paste. Electronic nose is basically an array of electronic sensors that create unique electrical signatures when different compounds bind to them. These signatures are then fed and matched to a database of tested compounds. Using their technology, Yan and colleagues attributed the pungent smell of shrimp paste to propanoic acid. Similarly, Harper and co-workers also found using electronic nose that the aroma of cheese can be completely attributed to just five types of fatty acids. Interestingly, propanoic acid is also on the list. These research shows that electronic nose has the potential to help remove or enhance pungent/aromatic smell from fermented food. 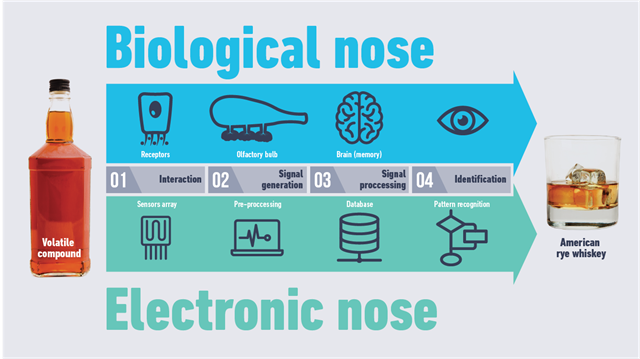 Our future with fermented food science

Fermented food is everywhere. The yogurt in the breakfast. The soy sauce condiment accompanying our sushi lunch. And not to forget, our glass of wine during dinner. The demand for fermented food is getting stronger and so is the size of its market. In 2016, PepsiCo introduced its Tropicana Essentials Probiotics beverages. Peet’s Coffee also recently acquired a majority stake in Revive Kombucha. Modern molecular biology technologies can be exploited to generate microorganisms with desirable traits and monitor microbial populations during fermentation. Microfluidic techniques can also speed up testing of recipes for the next killer fermented product while electronic nose can ‘refine’ the smell of fermented food. I hope that the next time you consume your favorite fermented food, you will remember what happens during this amazing process and appreciate the technological innovations that were pivotal to the discovery of fermentation and very likely, its future trajectory.