A permanent, brick-and-mortar facility is the most common type of lab, but there are certain situations where a mobile lab may prove more useful in bringing resources and testing facilities to a specific location. Mobile labs can be found in cars and trucks, recreational vehicles, ships, aircraft, and more, presenting flexible options to researchers, students, and medical personnel. One of the main advantages of a mobile laboratory is its portability—a mobile lab can be transported miles away from its home base, meaning that it can serve a broader clientele or access a wider range of research materials. A mobile lab with sleeping quarters means that money doesn’t need to be spent on lodging. Testing and research that occurs on-site can often produce faster results, and reduce turnaround time for data. Mobile labs also offer a sense of community outreach, by bringing their services directly to those in need.

A larger window for research

Ever wonder how a bird can fly hundreds of miles with no problem, but a human may feel exhausted after running for just 30 minutes? Auburn University has developed a mobile mitochondria lab, which enables researchers to study bioenergetics—the study of the transformation of energy in living organisms—to answer questions just like these. Auburn scientists are traveling the country in a specially outfitted RV, dubbed the “MitoMobile,” in order to observe the difference in energy sources among humans and certain animals, and to examine what kind of role mitochondria plays in this process. 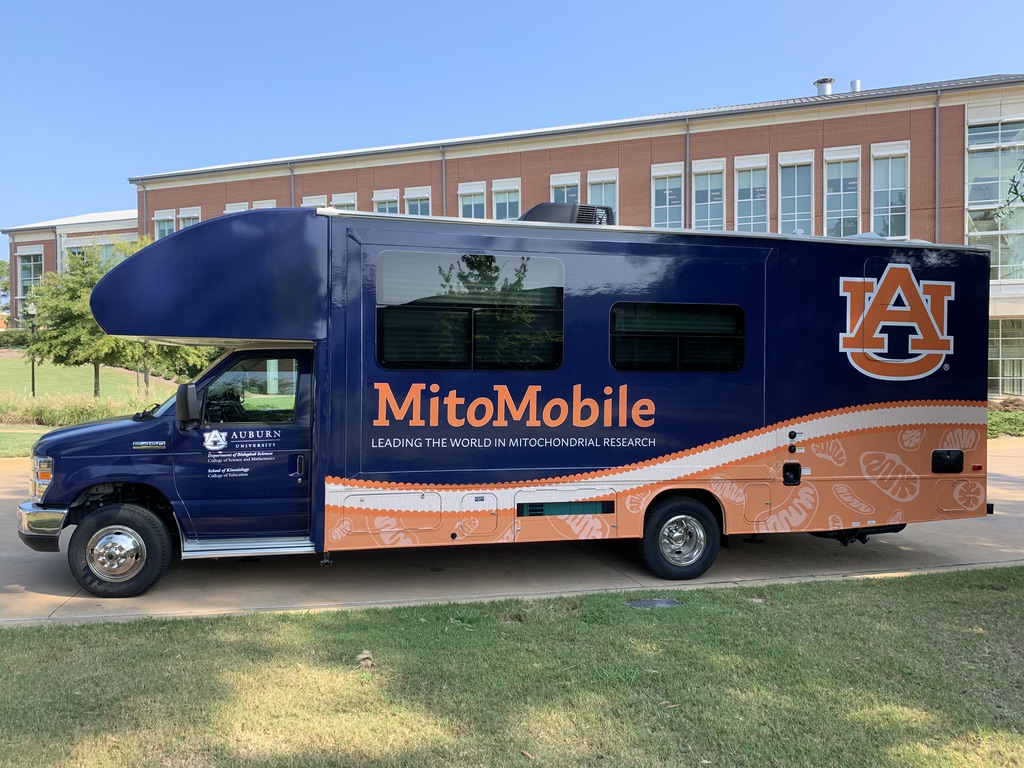 In order to study mitochondria, fresh, live tissue must be utilized. Therefore, researchers only have about a two-hour window to work with the material. The mobile lab allows researchers to travel to different locations to collect and study specimens on-site, which means that they are not limited to areas within a short distance of the permanent labs back at the university’s campus in Alabama.

Choosing the type of vehicle to house the MitoMobile was a task for engineers in Auburn’s Department of Electrical and Computer Engineering. The project team looked at other mobile labs around the country for inspiration, but could not find anything specifically dedicated to mobile mitochondrial research. “If you’re using centrifuges and scales, you have to have a balanced system,” says Bruce Gladden, professor of kinesiology and director of the Muscle Physiology Lab at Auburn University. “Initially, the engineers talked about things like an emergency vehicle or an ambulance, but they did the searching and discovered an RV that required the least amount of renovation inside and had most of the power characteristics needed.” 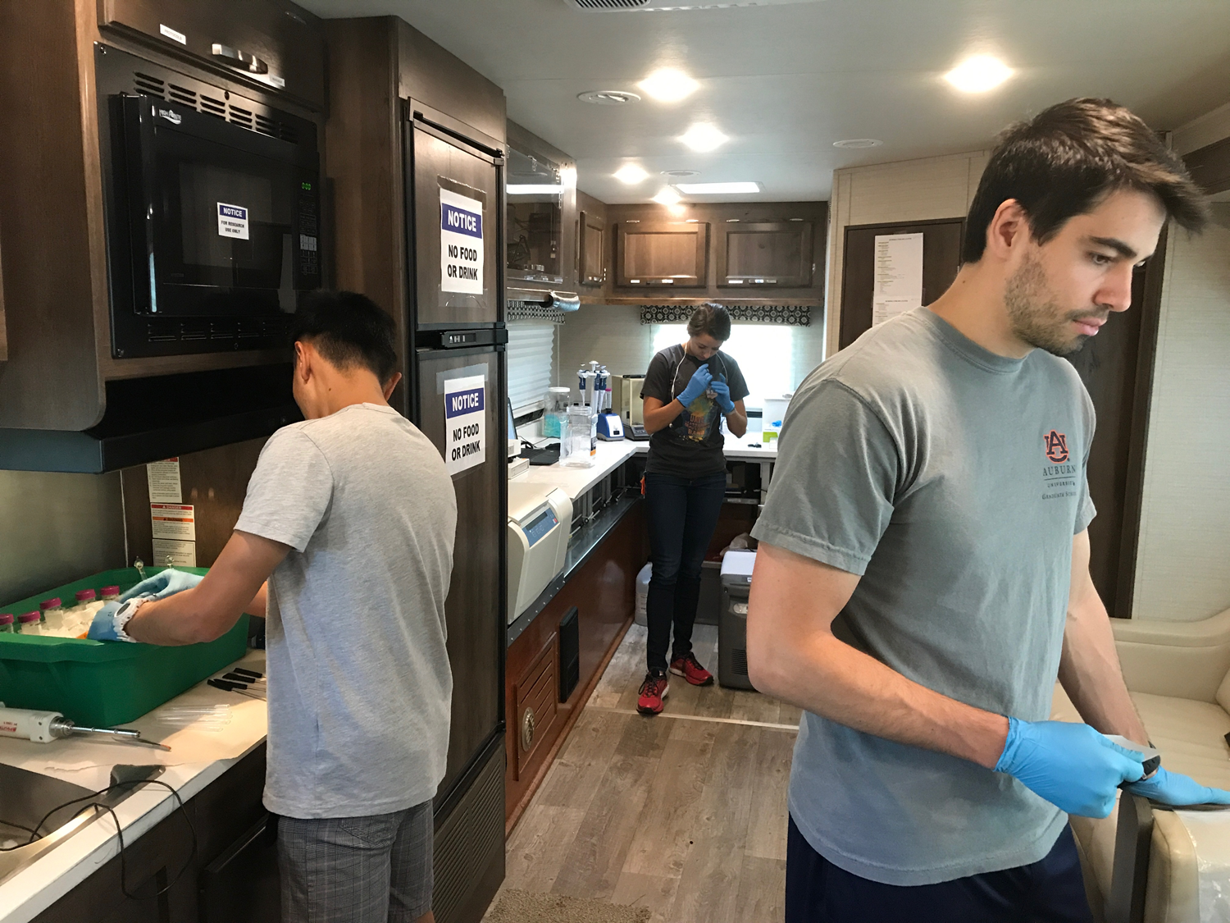 Students at work inside the MitoMobile.
Geoff Hill

“The other pro about getting an RV over some other vehicle is that it provided sleeping accommodations,” adds Andreas Kavazis, professor and director of the Muscle Biochemistry Lab, School of Kinesiology. He says that sleeping access for four to six people, along with a bathroom with a shower, means that the MitoMobile’s staff can stay on the road for up to two weeks at a time. This presents an advantage over a brick-and-mortar lab because it cuts down on travel time, hotel expenses, and the lag time that occurs when traveling between sample sites and testing sites.

The testing equipment runs off a generator—solar power was considered, say Gladden and Kavazis, but the weight of the solar panels would be too much for the MitoMobile. The RV is equipped with refrigerators and freezers, along with liquid nitrogen, the setup of which had to meet safety and Department of Transportation standards. The work was done in-house at Auburn, with a project team consisting of physiologists, biochemists, chemists, engineers, and others working together to outfit the mobile lab. “I don't think we can emphasize enough the importance of the collaboration,” says Gladden, adding that the engineers handled the carpentry tasks and bolted down the equipment so it wouldn’t move during transport. Gladden says that his team told them about the equipment that would be needed, “what power are they going to need, what space do they need to take up, and then they went from there.”

Bringing care to the client

Winnebago Industries, Inc. recently partnered with University of California at Los Angeles (UCLA) Health Center to develop the nation’s first all-electric mobile surgical instrument lab. This mobile medical unit will transport surgical suite instruments between UCLA's Ronald Reagan and Santa Monica medical center campuses—cleaning, repairing, disinfecting, and sterilizing them along the way. The institution estimates that switching from a third-party contractor to its own mobile lab will save nearly $750,000 per year.

“One of the questions [Winnebago] has been working on for the past 50 years, really, is, ‘What are other uses of RVs that we can build where we can take the platform of an RV or use the RV structure as a base, and build out different applications?’” says Ashis N. Bhattacharya, vice president of business development, specialty vehicles and advanced technology, for Winnebago. “There are two broad areas that we have been concentrating on—one is mobile applications of any kind, [and] a great majority of those applications have been mobile medical.” He notes that Winnebagos are already equipped with complex subsystems ranging from refrigerators and freezers, to air conditioning systems, flat-screen TVs, solar panels, and backup power and generators, therefore mobile medical is a good area in which to integrate these systems. Other ventures undertaken by the company for other medical institutions include a lung cancer screening vehicle and an opioid outreach vehicle.

“UCLA is, of course, one of the nation’s most well-known medical systems,” says Bhattacharya, adding that UCLA Health Center’s fleet also encompasses a Mobile Stroke Unit, a Mobile Eye Clinic, and a Mobile Clinic Project for people who would not otherwise have access to health care. “When we are talking about a vehicle, that initial needs analysis and design is a really critical part of the process.” He describes how operating conditions and the type, weight, and power requirements of the equipment factored into the design of the mobile laboratory. Winnebago worked with Motiv Power Systems to provide an EPIC F-53 33-foot electric chassis. They also collaborated with upfitters company Summit Bodyworks to do the fit-out of the van and to put the lab equipment in place—this includes two desks housed in a slide-out area, two workbenches, and an industrial sink, along with two stations for 5.5 gallon ultrasonic cleaners. Custom cabinetry and equipment can also be found inside.

The UCLA vehicle is an all-electric, zero-emission vehicle, which means that the RV does not need to idle while performing the instrument sterilization. Not only is this better for the environment, but it allows the vehicle to service areas that may have local anti-idling laws. The battery charge is expected to last eight hours.

“You can take services to the customer, versus having the customer come to you. One of the phrases I recently heard was, ‘The patient will see you now,’” says Bhattacharya. “This is a general trend that I think is of interest for readers of laboratory reports…whether it is for demonstrating new technologies, for doing onsite testing, for capacity utilization of expensive pieces of equipment. If you have a million dollars’ worth of equipment on the vehicle, you can really ensure that the vehicle is used for many hours of the day versus staying idle. So, capacity utilization is a key thing.”

Research and a classroom at sea

Duke University’s Marine Lab has used a number of research vessels in recent years. After the R/V Cape Hatteras was retired in 2012 and the R/V Susan Hudson followed suit in 2014, the institute used smaller boats—the Richard Barber and the Kirby-Smith—which were only suited for short trips close to the coast. The Duke Marine Lab received a donation of $11 million in 2017 to fund a brand new, larger vessel that could better accommodate the marine lab’s teaching and research capabilities. The resulting larger ship, the R/V Shearwater, now allows for overnight trips, and possesses the capability to perform oceanographic research rather than solely coastal research.

The R/V Cape Hatteras was owned by the National Science Foundation and was operated by a consortium of North Carolina universities. One of the advantages of the R/V Shearwater, says Katie Wood, assistant director, undergraduate & marine lab programs, Duke Marine Lab, is that the Duke Marine Lab could fully make it their own. “Since this vessel is owned by us, which is different than the Hatteras, we were able to customize it more to what the Marine Lab courses and research needed to be,” she says, noting that the Cape Hatteras was a “regional” vessel that needed to be shared between several institutions.

The Shearwater, designed by Teknicraft Design, was manufactured at All American Marine’s production facility in Bellingham, Washington. JMS Naval Architects provided assistance to Duke Marine Lab in regards to identifying the vessel capabilities and specific oceanographic outfitting; JMS also served as the vessel owner’s technical representative during the construction, outfitting, system tests, and sea trials at All American Marine. 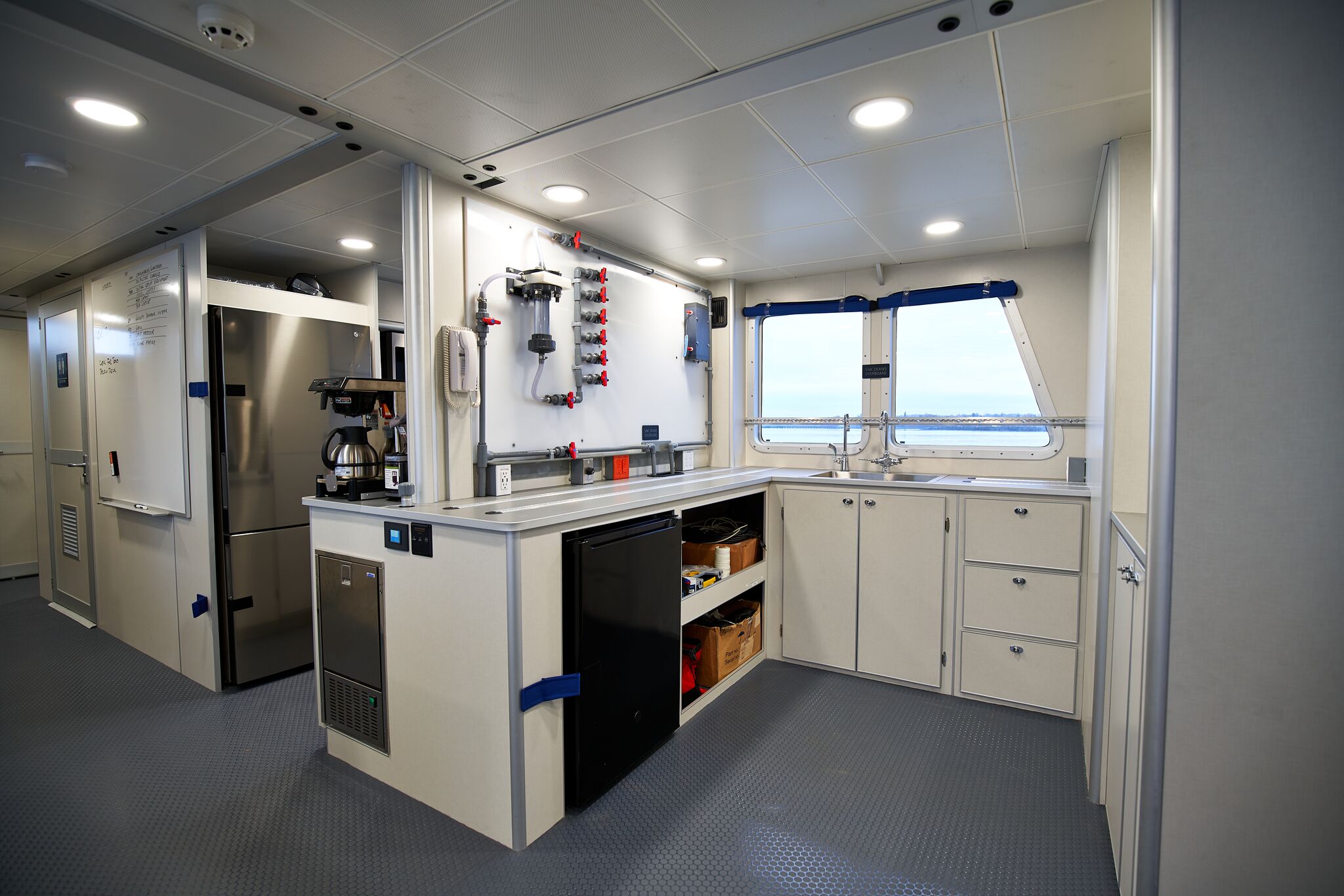 Wet lab and galley facilities onboard the R/V Shearwater.
All American Marine

The R/V Shearwater houses a combined total of 84 square feet for both dry and wet labs; the vessel features a wet wall with a debubbler and large sink, and ample, easily accessible rack space in the dry lab. There are also various kinds of research instruments and equipment, a navigation deck, a diving platform, teaching spaces, and sleeping quarters with bunk beds for overnight outings. The boat can accommodate up to 30 people for day trips and up to 15 people for overnights. It is outfitted with an A-frame and winches, used for the deployment and recovery of instrumentation; a crane, used for loading and discharging the vessel; and a 16-foot auxiliary boat. A track system is used to tie in any equipment needed during testing, and there is a built-in temporary opening provided for cords to access the back decks. The vessel also features a dedicated scientific wireway throughout for temporary wires.

“When we first started talking about getting the vessel and what that would look like, we certainly spent a lot of time talking about different research faculty, figuring out what the different needs were for the mammal team versus the biological oceanography team; to see what equipment should be standard; are there things it absolutely needs to have now, anything we should have later?” says Wood.

The Shearwater measures 77 feet long and is made of aluminum, meaning that it is lighter than steel ships and it can also be recycled. Degradable hydraulic oil is utilized in order to mitigate any damage from leaks, and the majority of the hull lacks paint in order to reduce paint chipping and peeling into the water over long-term use. Another “greener” feature is the vessel’s fuel-efficient tier 3 diesel engines, said to be the most efficient and least ecologically disruptive engines available when the ship was being designed. The vessel has a catamaran design, with two hulls instead of one—fixed aluminum hydrofoil reduces drag by allowing the boat to be lifted in the water.

The inaugural class aboard the R/V Shearwater set sail in January 2020, with a biological oceanography at sea class across south Florida and Dry Tortugas National Park. It is expected to reach its home at the Duke Marine Lab in South Carolina in the spring.