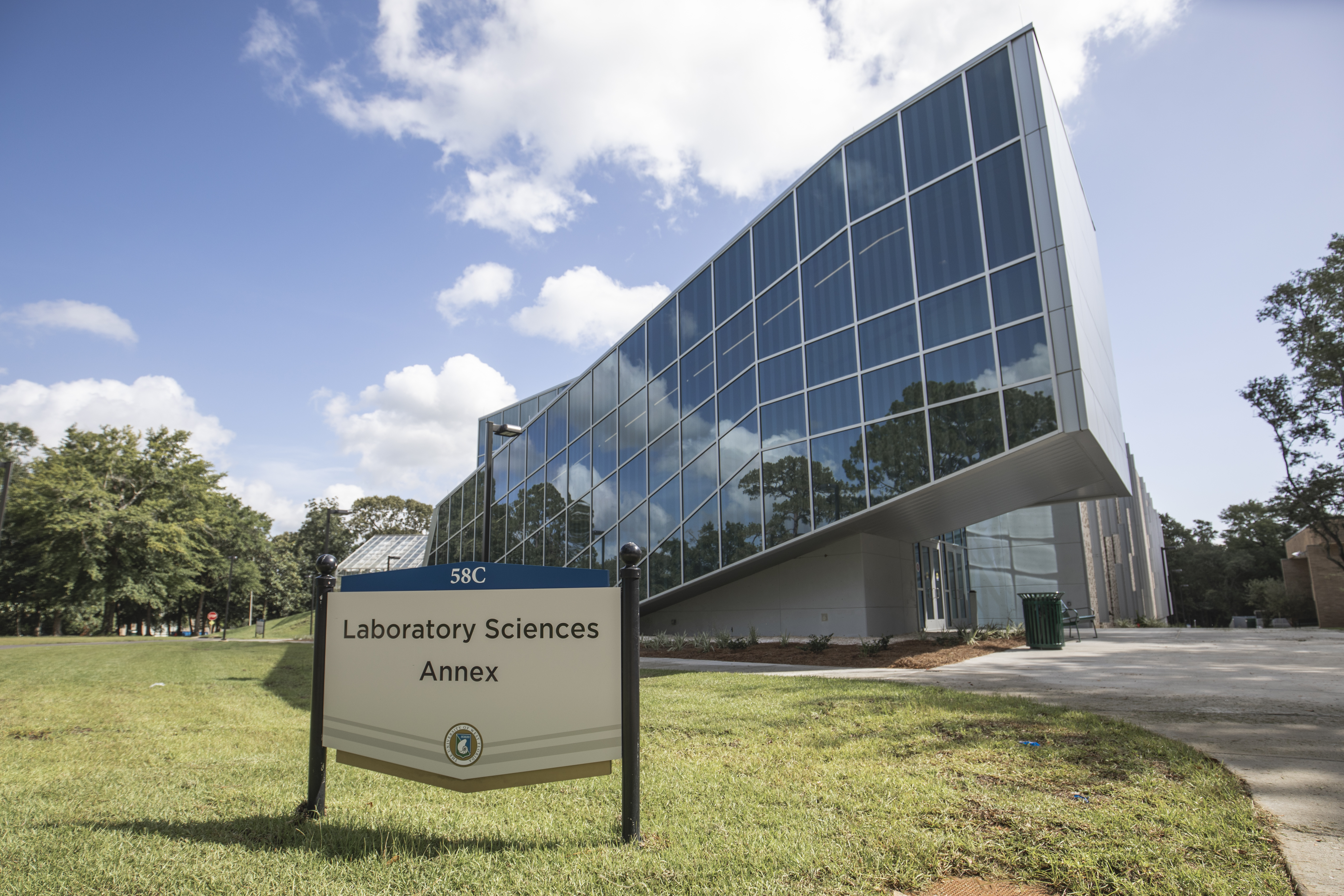 The University of West Florida Hal Marcus College of Science and Engineering has opened the Laboratory Sciences Annex, a facility built to accommodate wet teaching labs and facility/staff offices. The annex is home to 12 new teaching facilities for the biology and chemistry programs. The design also includes unfinished “shell” space for potential future expansion.

Dr. Peter Cavnar, associate professor, chair of biology at the University of West Florida, says that the Laboratory Sciences Annex—also known as Building 58C—was necessary in order to replace outdated facilities. “Our existing building .... still contains all the faculty research labs, but there has always been a need for an updated building,” he says, adding that the old building is from the 1960s and was never fully renovated; rather, updates were done piece-by-piece. “[There was] definitely a need for updated equipment, hoods, circuitry.”

Currently, about 24 percent of UWF students have declared a major that falls under the Hal Marcus College of Science and Engineering. Almost all of the first-time students in these programs will wind up utilizing a lab in the Laboratory Sciences Annex, therefore it was important to the planning team to create useful spaces for undergraduate students. “Biology, to begin with, is one of the largest majors on campus,” says Cavnar. “A lot of the teaching labs in the old building were shared; over the years it got almost unusable.” He says that the new 58C building was necessary in order to provide for expansion for student growth, and a sorely needed update to the lab facilities. One of these biology labs houses a biosafety cabinet, so students can safely work with contaminated or possibly contaminated materials.

The faculty had a hand in planning and organizing the new building, says Cavnar. The chemistry department specifically requested specific types of fume hoods, for example. Another department that needed very specific accommodations is the marine biology program. “They need to bring in specimens in huge buckets or 50 gallon drums of seawater. We had to have a floor that was drainable, that wouldn’t rot through the years.”

“Anatomy and physiology [departments] have special downdraft ventilation,” adds Cavnar, describing the accommodations made for formaldehyde specimens. The lab is hoping to work with cadavers in the future, he says, but for now flexibility is necessary in the design of the labs so that future technology can be incorporated into the labs without extensive overhauls. “One of the questions—not only what the faculty is doing not even today or in five years, but 20 years from now—the construction companies pushed us to think of was, ‘Are cadavers even going to be used 20 years from now?’” he says. He adds that virtual systems may be more common in the future, which is why flexibility was a major component of the building design.

Cavnar says that a crucial aspect of the lab design was for the planning team to consider what the lab and its staff may be taking on in the next 10 to 20 years. Therefore it was necessary to design a space that is adaptable for changes. For example, the furniture is mobile—all desks and chairs can be rearranged, moved, and changed by height and dimension. There is a cell bio lab, with cell culture hoods; students can do tissue culture in a teaching lab situation rather than a research lab. “The old labs were very fixed; they were all cabinet-based. It was restrictive and hard to move around. These new labs are open-air so the instructor can walk around the students,” he adds. 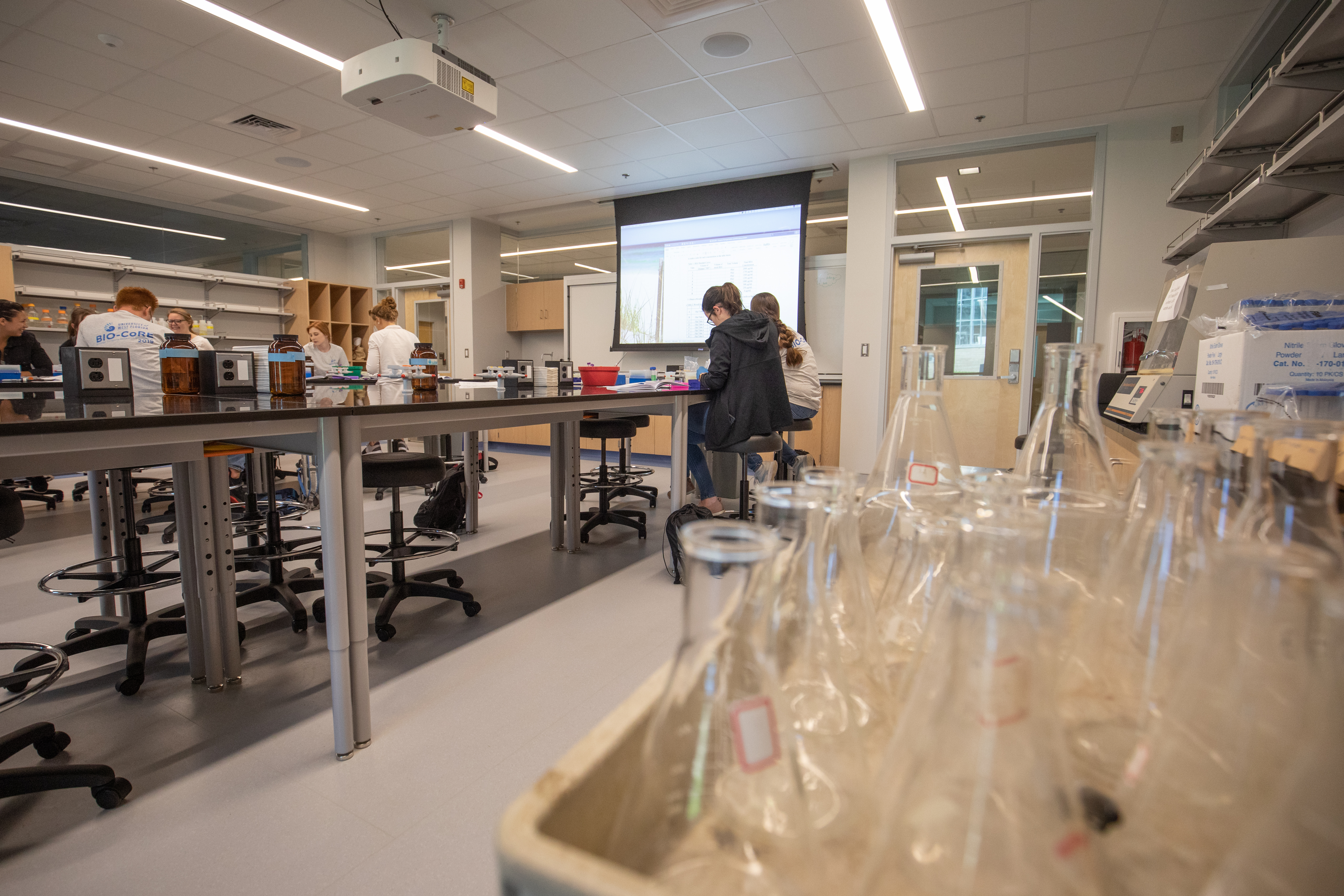 Students work in the labs at the Laboratory Sciences AnnexCREDIT: University of West Florida

The building also houses MeasureNet stations, which will enable students to utilize high-quality data collection technology in chemistry lab classes. The stations have state-of-the-art probes that offer students the chance to work with samples and experimental techniques that their courses didn’t previously offer.

The Laboratory Sciences Annex project faced a number of challenges along the way. “Our campus is known for being a natural layout of a campus so we have lots of trees around, green space, and we lost that … you have to lose that sometimes when building a building,” says Cavnar. The project design included some adjacent green space with some new tree planting to add in some of the green space that students and staff wanted. Moving to a new building meant that significant drainage construction had to be undertaken— for example, a retention pond had to be built out away from the building because it was too old and cracked, and the old building flooded often.

“Side benefit—not only did we get a new building but we got new utilities,” observes Cavnar. Systems such as air handling and water were installed in 58C’s basement. Aluminum beams are located on the sides of all the windows, with the angles based on the path of the sun in order to cut back on the need for air conditioning and reduce energy requirements.

Another challenge was dealing with the natural turnover of faculty and institution leaders during the design/build process. Different ideas and requirements came about during the project, therefore communication between all planning team members was of utmost importance. Cavnar says that frequent meetings were held with the project team and university officials to stay up-to-date on the plans and make sure everyone was on the same page. He notes that the project team was extremely good at creating virtual videos and pictures to document each design feature and change, so an accurate record was kept the whole time and nobody was caught by surprise. Another design challenge, he says, is scale, as it can be very difficult for people who aren’t engineers or developers to identify the proper scale of a building and its features.

There are 12 labs in the facility, says Cavnar. The building includes a front atrium area where students can study and socialize. There is also a completed empty space intended for future research research labs, with enough accommodation to build out six research labs on each floor. The research labs will then compliment the teaching labs. The space also includes office suites and conference rooms, with mobile desks and chairs for workshops and student groups. He hopes that they will be able to add a cafe in the future as well.

There are currently monitors stationed around the building for TVs to advertise programs and tutoring, with seating throughout the hallway, and bulletin boards and white boards for notices “Just creating seating space for students is very nice,” Cavnar says. 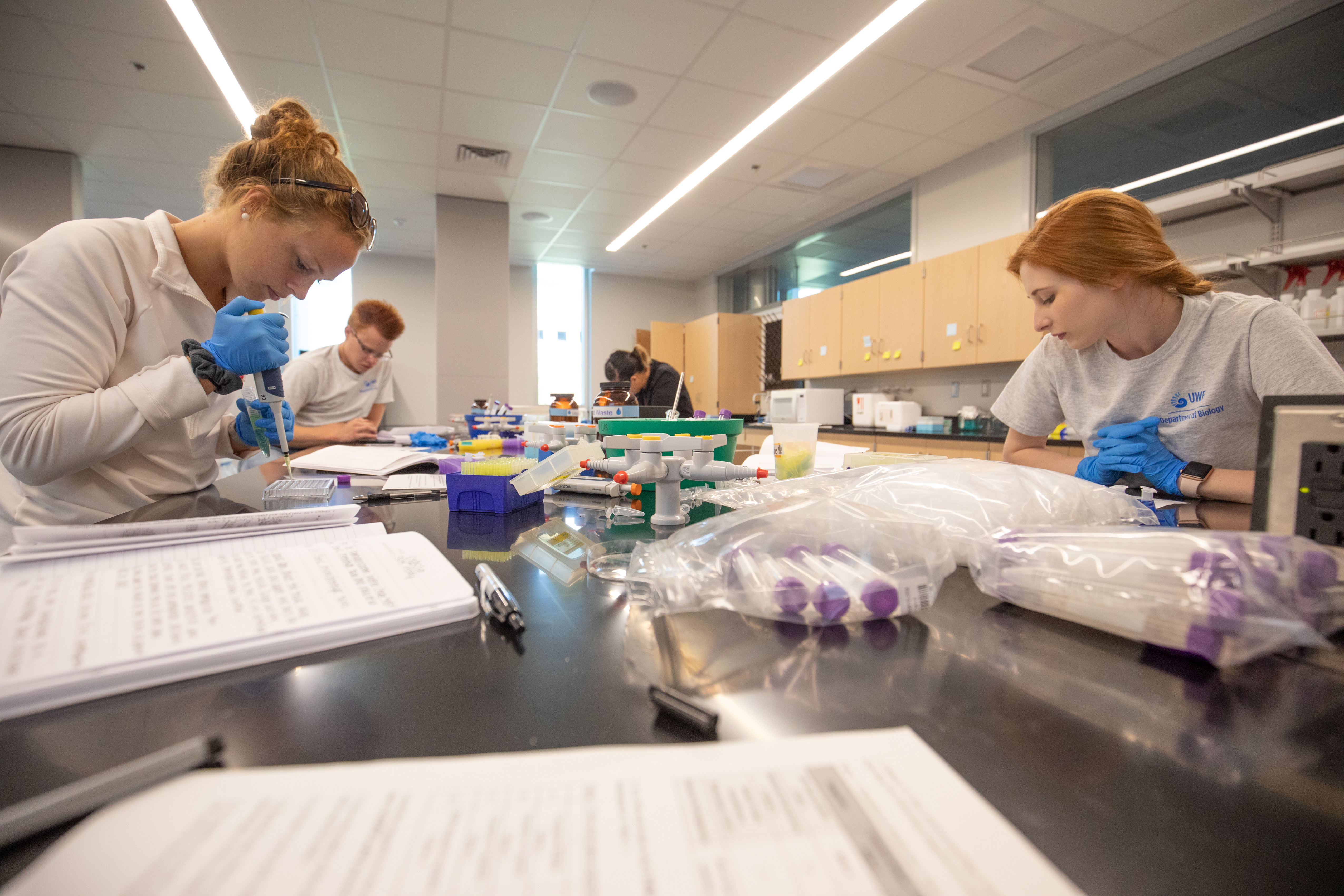 The students themselves seem pleased with the changes, says Cavnar. “All the students came back from [summer] break; they were used to the old building and now they get to take classes in the new building. They’re very happy.”

“One of our missions is undergrad research and education. The building is really designed for faculty and undergrads to work together and be in the same space together. The labs have a bunch of glass panels so you can see who’s in there,” says Canvar. “It’s an example of how you can design a way for faculty and students to engage more.”

He adds that it’s great to get a building of this caliber in the Pensacola area, and that it’s fortunate that the building includes so many areas where students can talk with faculty outside of the classrooms and offices. “Access is a big predictor” in how students perform, and that kind of communication, he says, “is going to be really effective for us.”

“Our state is very big on undergrad engagement, and so the way we received funding for the building was to really sell that point; to help engage students further, graduate faster,” he says. “It might be kind of weird to think, ‘How can a building help a student graduate?’ but it can.”