Applications for STEM-related majors at Gonzaga University in Spokane, WA, have doubled within the past decade, and the university has responded to the surge by breaking ground on its Integrated Science and Engineering facility. The ISE building is designed to accommodate classrooms, research space, and laboratory education for interdisciplinary studies and collaborative science and engineering research. 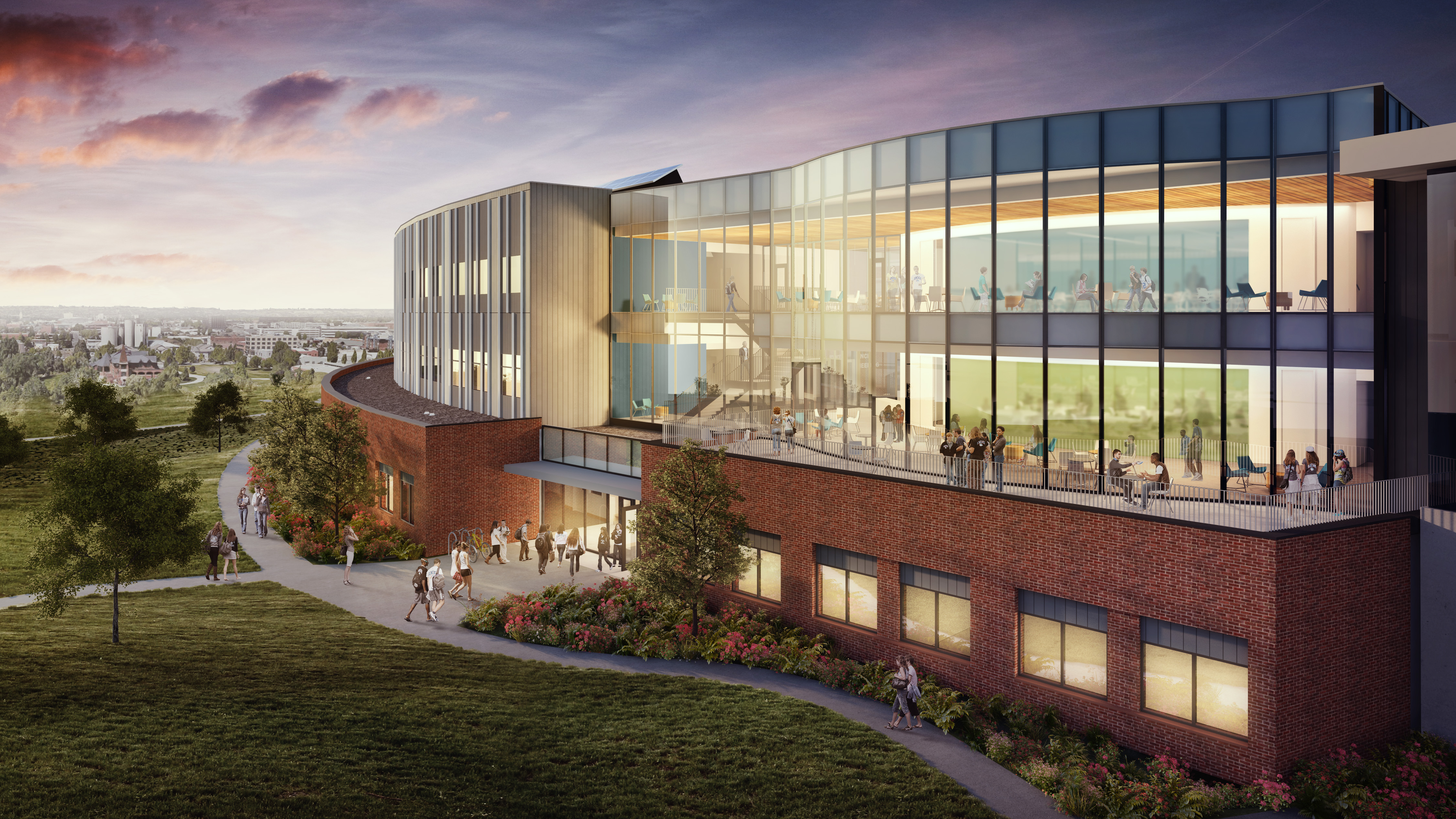 "It actually started as a linking between the disciplines in the College of Arts and Sciences and the School of Engineering and Applied Science. The buildings on campus are physically next to each other—this building will provide a direct indoor link between the two buildings. It’s literally and figuratively intended to provide new opportunities for faculty and students to collaborate,” says Lisa Petterson, AIA, LC, LEED AP BD+C, NCARB, principal with SRG Partnership, Inc.

The ISE building will utilize skybridges to connect it with the nearby PACCAR Center for Applied Science, a 10 year-old building which, in turn, is connected by skybridge to the Herak Center for Engineering; and the chemistry and biology departments located in Hughes Hall.

“The University has been great at working together to arrive at a great mix of the spaces within,” continues Petterson. “Rather than having spaces that are specifically developed to the College of Science or School of Engineering, we’re trying to do interdisciplinary spaces that allow the overall program to be maintained.” 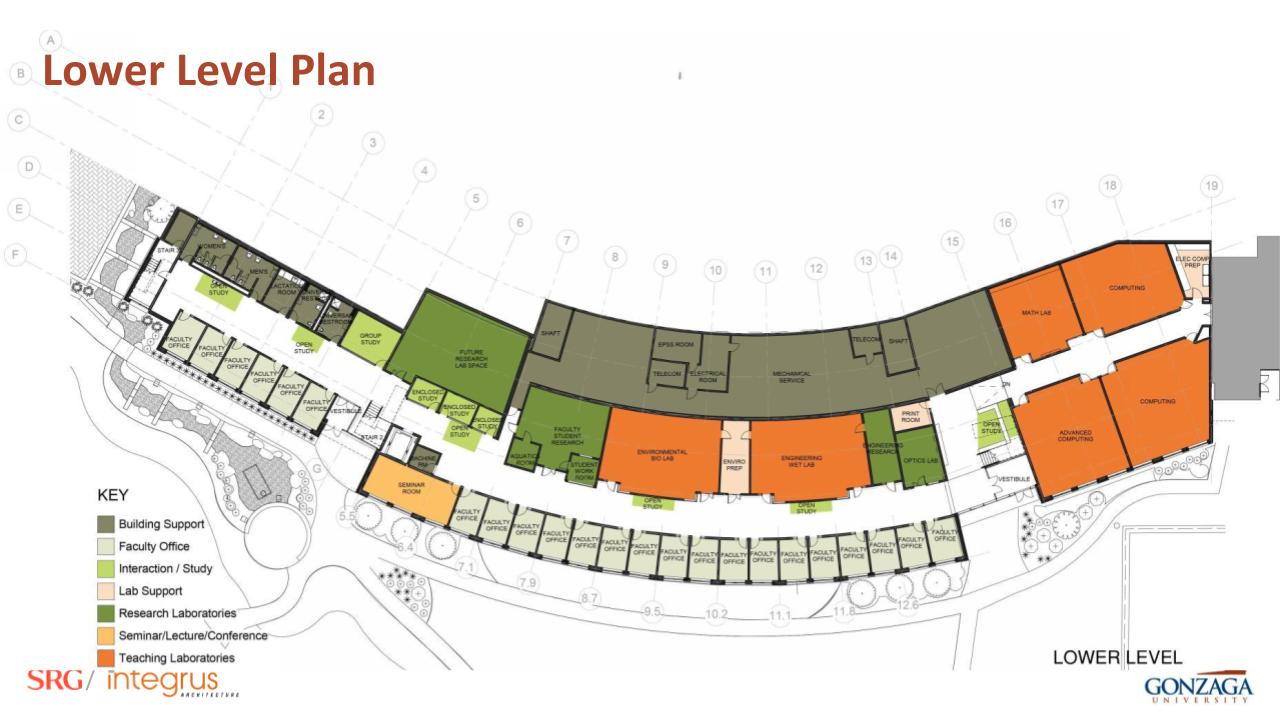 Some of the lab spaces featured in the Integrated Science and Engineering building include an engineering research lab, mechanical research lab, circuits lab, student project wet lab, molecular biology biochem lab, and a structures lab, among others.

A coffee bar on the ground level will serve as a base for a large central gathering space. An innovation center will be located adjacent to this area, housing interdisciplinary classes.

Almost 30 percent of the building is dedicated to student study areas of different sizes and designs, says Petterson. There are conventional open study areas next to the coffee area, while others are designed as enclosed study rooms, and some are tucked away, in order to offer students variety in their study spaces. “That’s really the core about what this building is about—it’s about the student, being able to engage the student in the research activities that are going on,” she says. 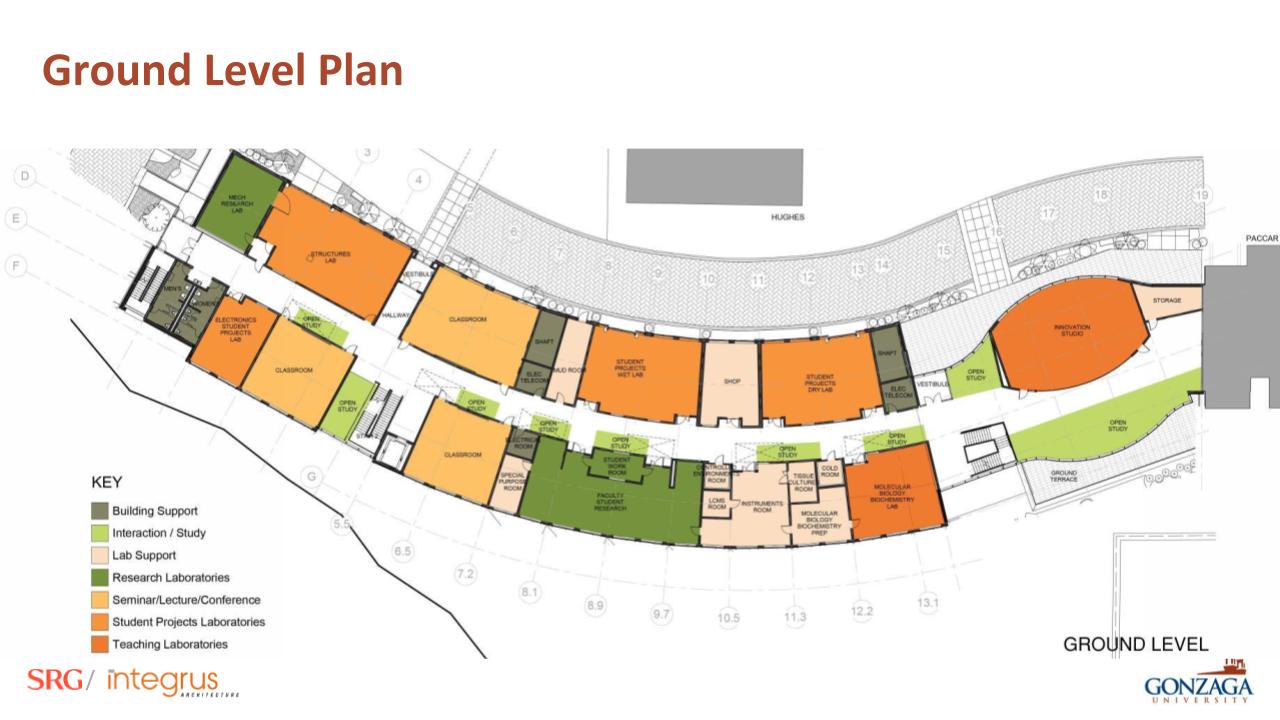 Large open student project spaces, designed to be open with a studio atmosphere, will also be situated on the ground floor, allowing students to observe the teaching and research going on in the ISE building. The teaching labs will be set up across the corridor—a student interaction zone will be located between, allowing for collaboration between disciplines.

"We have what we call the Innovation Hub, which is two areas—an innovation studio and a lab—and the idea is to actually expose freshmen to the integrated sciences and engineering classes,” says Petterson. “This particular series of rooms is located very prominently along a pedestrian path. The idea is that students from other colleges throughout the university will be able to see science and engineering on display.”

The ISE facility, says Petterson, is designed to stand the test of time, with room for possible future expansion.

“The building's mission is to be a 100-year building,” says Petterson. “When you think about a 100-year building, you're talking about making sure your structure and building skin are of a quality to last more than 100 years. Mechanical and electrical systems typically don’t have that lifespan.” 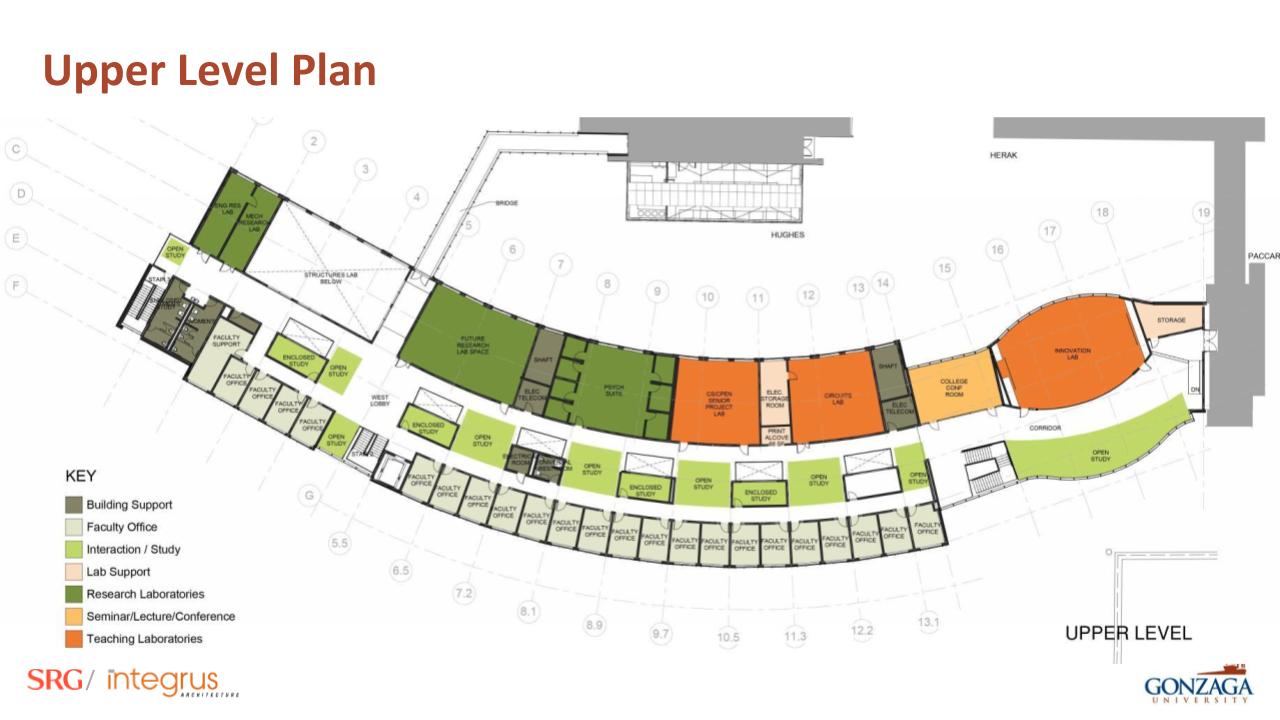 The corridors are primarily open with ceiling clouds suspended below, not only in critical areas for viewing but to have the assemblies (such as ductwork, sprinklers, etc.) able to be accessed from the corridor. Says Petterson, “Students are able to see the ductwork and understand all the different systems because they’re exposed to view.”

The structures lab features a bridge crane along the pedestrian pathway that connects past the ISE building to the library, and to the student union beyond, which is a major hub for students. Thanks to a large fold-up door, students will be able to walk in and view the activities within the building.

It’s this attitude of “science on display,” says Petterson, that is vital to attracting new, diverse students to STEM programs at Gonzaga. The design of the ISE building is intended to make young people excited about science and engineering programs.

“It’s interesting because one of our engineers on our project—a female mechanical engineer—recalled to us how she was at Gonzaga and trying to figure out what she wanted to do,” says Petterson. That interaction with the School of Engineering and Applied Science, she adds, changed the course of that woman’s career.