Spacecraft are very complex, expensive instruments, used to conduct research that benefits both astronauts orbiting the Earth as well as scientists on the ground. Sending scientific instruments into space obviously carries some level of risk, and on-orbit repairs to faulty equipment can be difficult, or even impossible. Therefore, it’s crucial for this equipment to be thoroughly tested on Earth before it’s launched into orbit, to minimize any potential issues.

The Air Force Research Laboratory Space Vehicles Directorate conducts such testing in its new Deployable Structures Laboratory, located at Kirtland Air Force Base in Albuquerque, NM. The lab is focused on developing materials for new deployable space structures, and works toward technology development and transition for spacecraft structure materials. The Air Force Research Laboratory has been researching and developing high strain composite materials for use on spacecraft for more than a decade.

The DeSel lab is currently concentrating on enhancing the types of missions able to be performed by small satellites. The lab works to develop spacecraft with “high packing efficiency,” meaning that the strictures can be compressed in size for launch, and then deploy to full size upon reaching orbit—manipulating their size and weight for launch helps maximize their performance once they get into position in space. 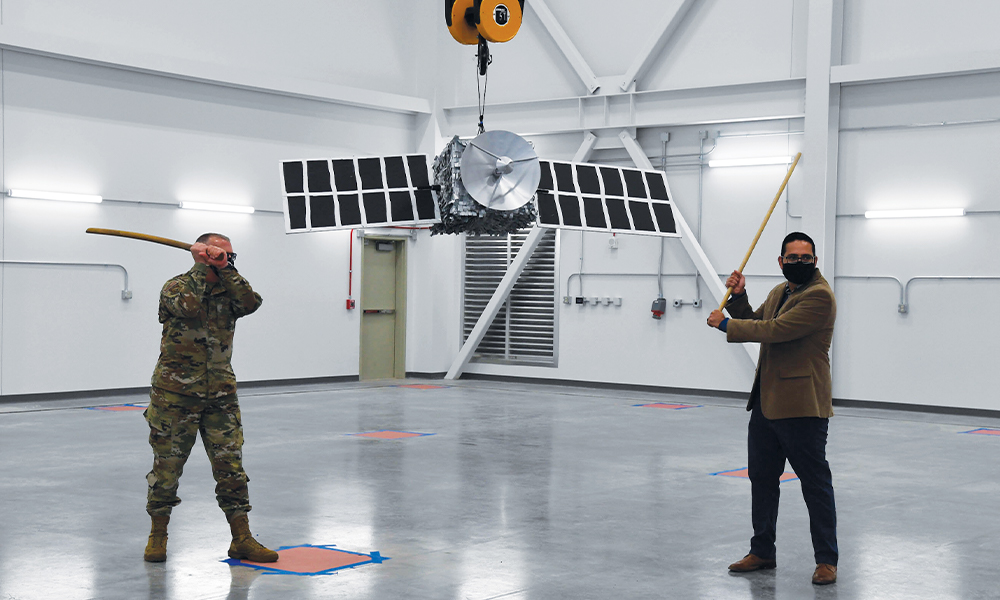 “When we talk deployable structures, we're talking about things like solar arrays, antennas, booms, trusses—anything that you could imagine that would package up in a small volume for launch and then deploy on-orbit,” says Benjamin Urioste, research engineer and lead for the Integrated Structural Systems team that undertakes the research done in the DeSel. “For most people to understand the analogy, you can think of it as like a camping tent or an umbrella. It has to package up really small for transport. And then when you get to the place where you want to deploy, it expands to a large volume. So, similarly, that's what we need to do with a deployable structure.”

When such equipment is folded into more compact sizes, they can be carried into orbit by smaller satellites, which has a positive effect on the cost and durability of these satellites. Urioste cites the James Webb Telescope, which has a deployable solar blanket, as a relatively well-known example of a deployable structure. Miniaturizing components such as navigation tools and cameras help implement a “do more with less” strategy for in-orbit research, and the development of small satellites allows for smaller, niche companies to work alongside major aerospace organizations, the government, and the military to perform better research in space.

Urioste continues, “You can also look at one of our previous flight experiments called ROSA, the Roll-Out Solar Array, which is one that we're especially proud of, that we teamed up with NASA to deploy on board the International Space Station in 2017. ROSA used some really exciting deployment mechanism technology that we developed—we utilized high strain carbon composites to deploy a slit-tube boom. It’s really neat—it uses strain energy, it reduces complexity of mechanisms and machining. So, this lab is really dedicated to taking those large structures like ROSA and testing them on the ground. We can learn a great amount of information just by testing in a simulated microgravity environment.” 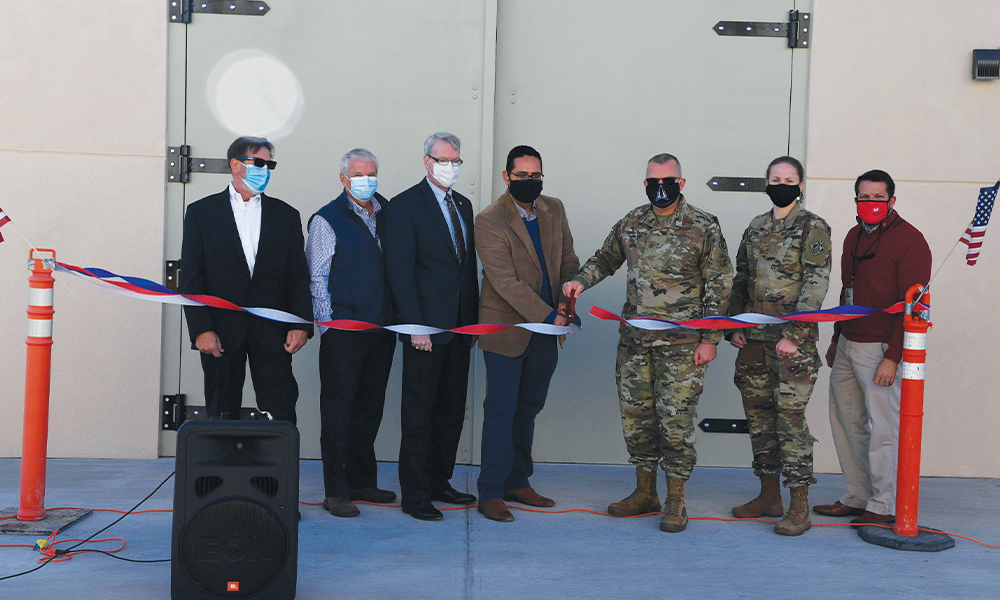 Members of the Air Force Research Laboratory Space Vehicles Directorate and US Army Corps of Engineers celebrate the opening of the Deployable Structures Laboratory at Kirtland Air Force Base, NM, on Oct. 29, 2020.
US Air Force photo by Airman 1st Class Ireland Summers

Creating the microgravity environment for their deployment, says Urioste, allows the team to “build assurance that what we’re doing on the ground is going to work in space.” He says there are typically 10 to 20 staff working in the facility at any given time, although it depends on the specific project.

The DeSel facility is home to a secure, climate-controlled, vibration isolated laboratory, capable of testing structures up to 20-by-15 meters (65.7 ft. x 49.2 ft.). The high bay space allows massive spacecraft structures the room they need for testing, the HVAC system keeps air flow under control so as not to disrupt the functions of the equipment, and the flat floor in the facility isolates activities and research from outside vibration. “This building is large and it's a facility that has some unique requirements in terms of noise isolation and how stiff our infrastructure needs to be to prevent any of that noise from external sources being passed to our test article,” says Urioste. “We have to go through a rigorous engineering design process to make sure that our infrastructure inside the building and our test apparatus is noise isolating, and it doesn't contribute to any of the air in our measurements. So that's been really challenging.” 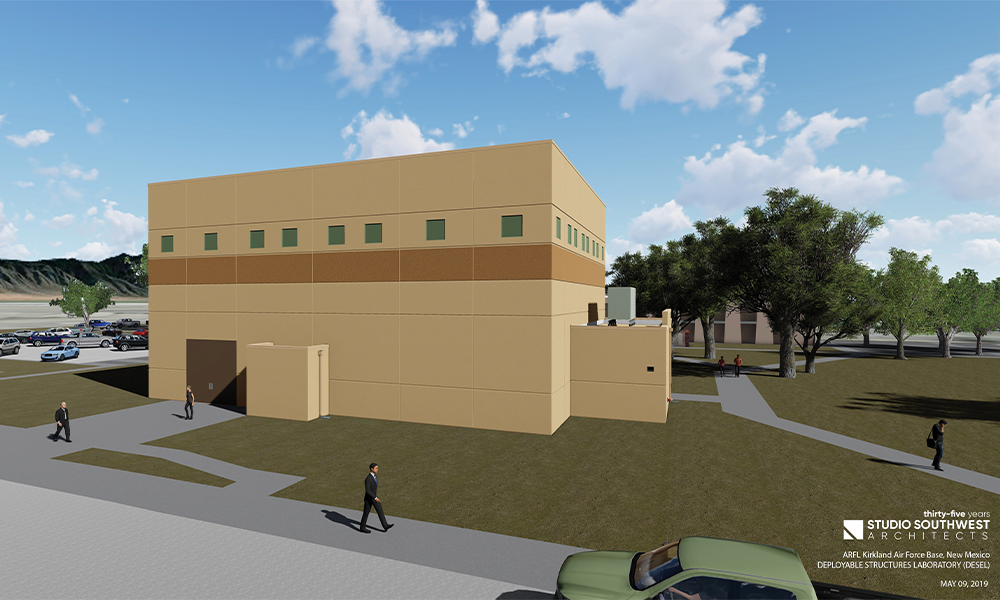 Rendering of the AFRL Space Vehicles Directorate’s Deployable Structures Laboratory located on Kirtland Air Force Base, NM. The laboratory opened with a ribbon cutting ceremony on Oct. 29. It was constructed by Sky Blue Builders and designed by Studio Southwest Architects, both of Albuquerque, and will be used for testing novel deployable space structures.
Studio Southwest Architects

The DeSel lab is currently working on AFRL’s Space Solar Power Incremental Demonstration and Research (SSPIDR) project, a space-based solar power initiative that will harness solar energy while in space, transform it to radio frequency, and then beam it to Earth. AFRL has partnered with Northrop Grumman to develop the required large solar arrays that will have to be assembled once in orbit.

“We want to be the government's independent testing laboratory for deployable structures. So, for any type of structure that goes up into space, we offer our resources to provide analysis and testing of that structure to validate its design and veracity for functionality. That's the service we offer to the Air Force and Space Force,” says Urioste. “As far as spacecraft deployable structures go, it's an area I’m particularly passionate about. What I like to say is, you can't have a spacecraft without a deployable structure. So, you won't have power aboard your spacecraft without a solar array; you won't be able to communicate your message down to the Earth or to another satellite without an antenna that deploys. It's a critical part of the spacecraft, and it's also notoriously high risk. They fail quite a bit, and that should be a testament to the need to test these structures more often on the ground so we can have a higher level of confidence on-orbit. There are a number of different things that are very unpredictable on these structures that could happen on-orbit. We are working to increase assurance that we’re successful every time that we go to deploy something.”

“Every structure that we test is a new learning opportunity for us—there is no one structure that is like another,” says Urioste. “You go in with some assumptions about how structures might behave, and you're constantly surprised and always learning about these deployable structures. And it's an exciting field to be in.”

What a Martian Meteorite Can Teach Us about Earth’s Origins

What a Martian Meteorite Can Teach Us about Earth’s Origins