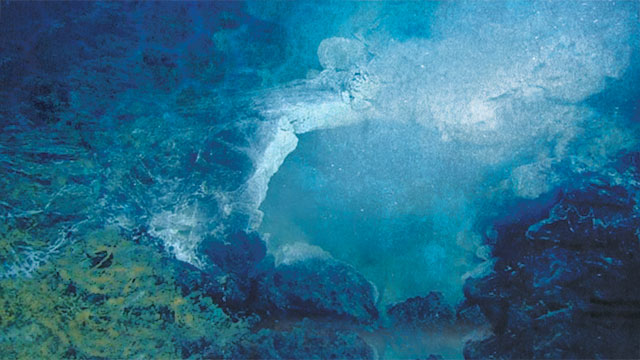 There’s a lot going on below the ocean waves off the coast of Oregon and Washington—activity most of us would miss if it weren’t for the Ocean Observatories Initiative’s (OOI’s) Cabled Array. This research array, one of seven such arrays of sensors, instruments, and robotic vehicles that are part of the OOI, is the only one supplied with high power and Internet through telecommunications cables along the seafloor. The OOI, funded by the National Science Foundation and managed by the nonprofit Consortium for Ocean Leadership, is part of the U.S. contribution to the Global Ocean Observing System.

“A lot of the powerful environmental events that happen in the oceans occur when we’re not there,” says Deborah Kelley, a professor at the University of Washington’s (UW’s) School of Oceanography and director of the OOI Cabled Array. “We’re rarely in the right place at the right time to monitor and interact with all the evolving processes [that impact the ocean], which include big storms, underwater eruptions, and large earthquakes.”

John Delaney, another UW oceanography professor and a former OOI Cabled Array director, was the visionary for the array, an idea born around 15 to 20 years ago out of the school’s research on underwater volcanoes and hot springs about a mile below the ocean’s surface.

“We would go out there every year, if we were lucky, with a robotic vehicle or a three-person sub, and the landscape would be dramatically different and the animals would change,” Kelley explains. “Clearly, from year to year, things were going on, but we weren’t there to witness these changes and measure the environmental parameters that caused these changes.” 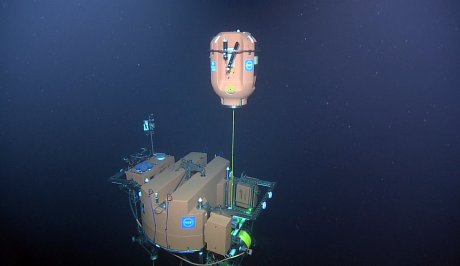 This mooring platform at 200 meters beneath the ocean’s surface near the base of Axial Seamount is anchored by two strong cables that reach to the seafloor at 2,700 meters. The 7-ton, 12-foot-wide platform hosts eight instruments on a stationary platform and another 10 on a winched profiler that makes nine trips up and down the water column each day. The instruments measure parameters that include currents, nutrients, temperature, acoustics (including mammals), oxygen, salinity, and carbon dioxide concentrations in the ocean waters. All data are streamed live back to shore in real time. These measurements allow users to investigate how vocalizations of whales are changing over time and how changes in the temperature and chemistry of the oceans may impact biological communities.Photo Credit: UW/NSF OOI/CSSF; V15Providing power and Internet to the seafloor solves that issue, allowing for real-time monitoring as well as two-way communication between the operations center at UW and the instruments in the ocean. UW is one of four universities under contract to help manage and maintain various aspects of the OOI.

“We can interact 24 hours a day with the instruments out there, as things evolve,” Kelley says. “It’s a real game-changer in terms of understanding and monitoring, really being there with eyes and ears in the oceans 24 hours a day.”

All the data collected by both the Cabled Array and the six other OOI arrays are publicly available for researchers and anyone interested to use as they wish. Even those who have never been near the ocean can check out real-time video captured by the array’s cameras.

Along with being the only cabled research array in the OOI, the Cabled Array’s location is also part of what makes it unique. The section of seafloor it covers includes the Juan de Fuca Plate, a very active tectonic plate that’s easy to get to, giving researchers the ability to study volcanism at close range.

“It’s the world’s largest undersea volcanic observatory,” says Greg Ulses, OOI program director, about the Cabled Array. The other OOI arrays are located in the Gulf of Alaska, the Irminger Sea near Greenland, off the coast of New England, in the Argentine Basin, and in the Southern Ocean. The Endurance Array, also off the Oregon coast, complements the Cabled Array. OOI’s design and conception began about 10 years ago and it took around seven years to construct at a cost of roughly $300 million. It has been fully operational since only last year, Ulses says.

“The logistics are pretty interesting both for the Cabled Array and its six other moored counterparts,” Ulses says. “Much of the instrumentation that is deployed is actually retrieved and replaced during deployment cruises, called turn cruises, at least once a year for the Cabled Array and the high-latitude global arrays.” The Endurance Array off Oregon’s coast and the Pioneer Array off the coast of New England are turned twice per year because they’re more prone to biofouling, he adds. 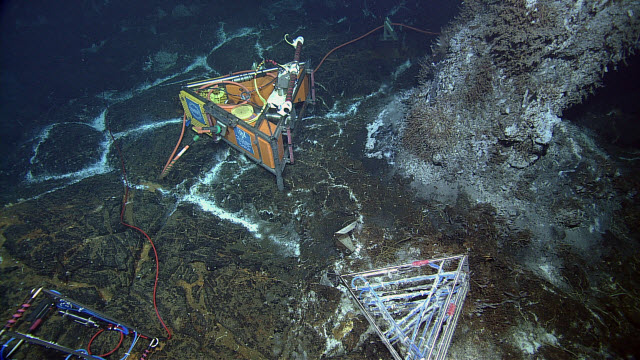 A cabled high-definition (HD) camera is installed on the summit of Axial Seamount at a water depth of 1,500 meters more than 250 miles offshore. The camera streams live HD imagery to shore of an active, underwater hot spring deposit called Mushroom that vents ~260°C fluids. The metal sulfide chimney rises ~3.5 meters above the seafloor and is covered in a dense animal community of tubeworms, palm worms, scale worms, and limpets. Microbes that derive their energy from gases coming off the volcano thrive inside the chimney walls.Photo Credit: UW/ NSF-OOI/CSSF; Dive R1730; V14

Being in a tough ocean environment for six months to a year at a time, some instruments can take a beating. All instrumentation on the Cabled Array is beneath the surface of the ocean, however, away from wave action. Those instruments include over 30 types—ranging from simple temperature sensors to underwater mass spectrometers, chemical sensors, and seismometers. There’s even a camera that streams high-definition video, live, of 300°C hot springs that are encased in novel animals and microbes on Axial Seamount, which is over 300 miles offshore and at a water depth of 1,500 meters.

“It’s a really diverse suite of instruments to get very high temporal-spatial coverage—from microseconds to 25 years—of the various parameters that we’re measuring in the oceans to understand what processes are going on and how the oceans are changing over time,” Kelley explains.

The design and care of those instruments, performed by UW’s Applied Physics Lab, presents some challenges, but their rigorous operations and maintenance program, which includes the 35-day turn cruise each summer, has largely kept those issues in check. Kelley estimates that during the program’s first year, 95 percent of the instruments were fully operational—a great success.

She adds that the array is similar to traditional labs in that scientists are ensuring they’re collecting all the right metadata and that everything is calibrated and maintained properly. “What’s dissimilar is that we’re working in darkness, unless there’s a vehicle there, in sometimes not very pleasant weather, at water depths up to 2,900 meters—it’s just a much harsher environment in some ways,” she says.

Including full- and part-time staff, close to 20 people look after the instruments, and they usually take 20 to 30 undergraduate and graduate students on their maintenance cruises to help with all seagoing activities and to conduct their own research. 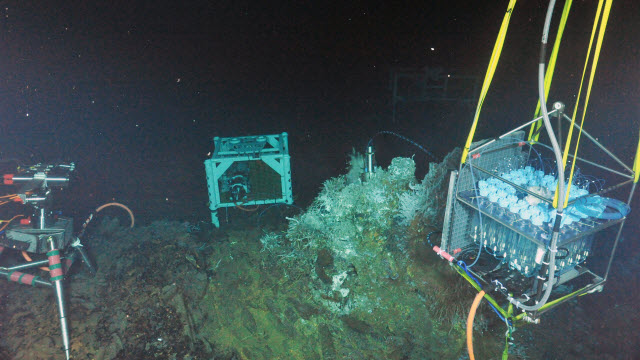 Speaking of research, plenty of exciting work has resulted from data streamed live by the Cabled Array. That includes documentation of changes in the release of methane gas from the seafloor and associated biological communities, submarine volcanic explosions, and the microbes that live in underwater hot springs at the summit of Axial Seamount. In 2015, researchers monitored the volcano’s eruption in real time, marked by over 8,000 earthquakes occurring in a 24-hour period, a drop in the seafloor of 2.4 meters over that same period, and over 30,000 small explosions as the new lava erupted onto the seafloor.

“We went out on the annual maintenance cruise three months later and mapped and dove on a 127 meter-thick lava flow covered in thick mats of microbes resulting from that eruption. The Cabled Array allowed people around the world to ‘watch and hear’ the earthquake activity and the explosions live,” Kelley says.

She adds that sharing this unique environment with those who wouldn’t otherwise be able to experience it is the best part of being involved in the Cabled Array.

“Everybody on the planet can look up at night and see the sky and the stars, but it’s hard to see what’s in the deep ocean, the last frontier on Earth,” Kelley says. “One of the main reasons we’re doing this is that the oceans govern the health of the planet, and as the oceans evolve, so will the quality of life on Earth. For me, having the opportunity to change the way that we interact with and understand the oceans is a pretty humbling experience.”