There are plenty of labs focused on researching athletic performance in traditional sports, but not too many explore the makeup of those who compete in the newly emerging industry of electronic sports, or “esports.”

Lero, the Science Foundation Ireland Research Centre for Software, became one of the few institutions in the world focused on esports athlete research when it opened its Esports Science Research Lab at the University of Limerick in the summer of 2019, the first such lab in Ireland.

“As gaming and esports is quite a sedentary activity, these gamers demonstrate superior cognitive profiles compared to other groups.”

Esports, essentially professional video gaming, is growing quickly with the best players earning millions of dollars each year and more teams and leagues starting up worldwide. With many traditional sports leagues and competitions shut down due to the ongoing COVID-19 crisis, it’s possible we could see such virtual sports leagues grow at an even quicker rate than expected. But esports athletes are a different breed than their traditional counterparts, meaning most sports science does not apply to them. That’s a knowledge gap Lero’s esports lab is hoping to close. 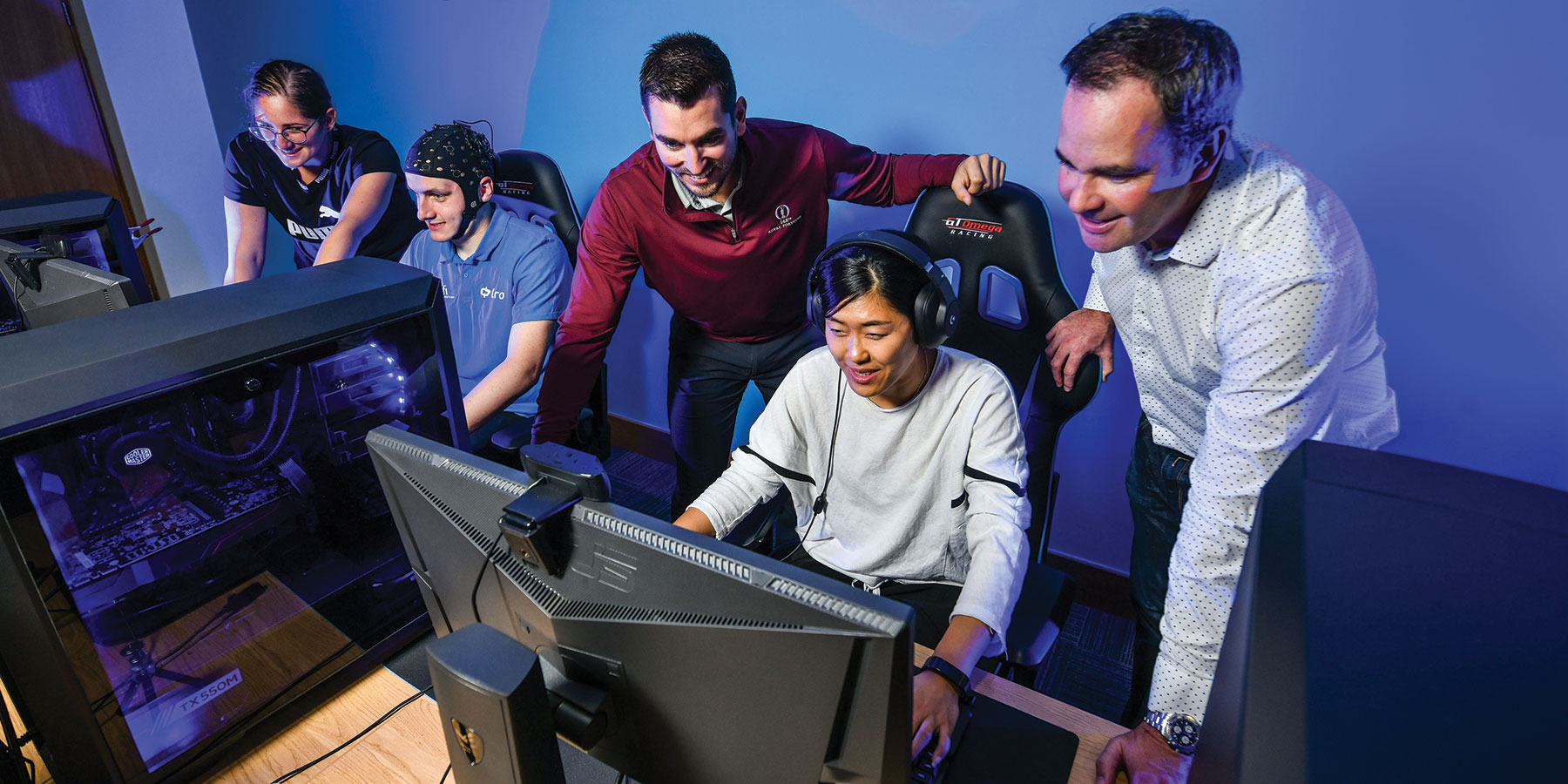 “As gaming and esports is quite a sedentary activity, these gamers demonstrate superior cognitive profiles compared to other groups,” says Mark Campbell, director of the Lero Esports Science Research Lab. “We call them ‘cognitive athletes.’”

The lab tests a variety of key esports skills with “a suite of software tests that essentially isolate and measure individual esport and gaming skills,” Campbell explains. Those skills include mouse tracking, peripheral vision, mouse movement precision, and keyboard synchrony—“the ability to rapidly and accurately press a number of keys on the keyboard individually and in a particular order or simultaneously so as to move or perform critical actions in their esport game,” he adds.

At Lero, Campbell and his team focus on those who play action video games, which make up two of the biggest esports genres—first person shooters such as Counter-Strike Global Offensive, Apex Legends, and Fortnite—and multiplayer online battle arena games such as Defense of the Ancients and League of Legends.

With esports largely testing players’ mental abilities and fine motor skills, players are able to compete equally regardless of gender. Research in the lab has also focused on this aspect of esports, recently finding that, when it comes to spatial cognition, neither sex has a competitive edge. As esports is still so new, even retired athletes can’t yet be considered old, but the lab plans to do some work on skill level and age going forward. 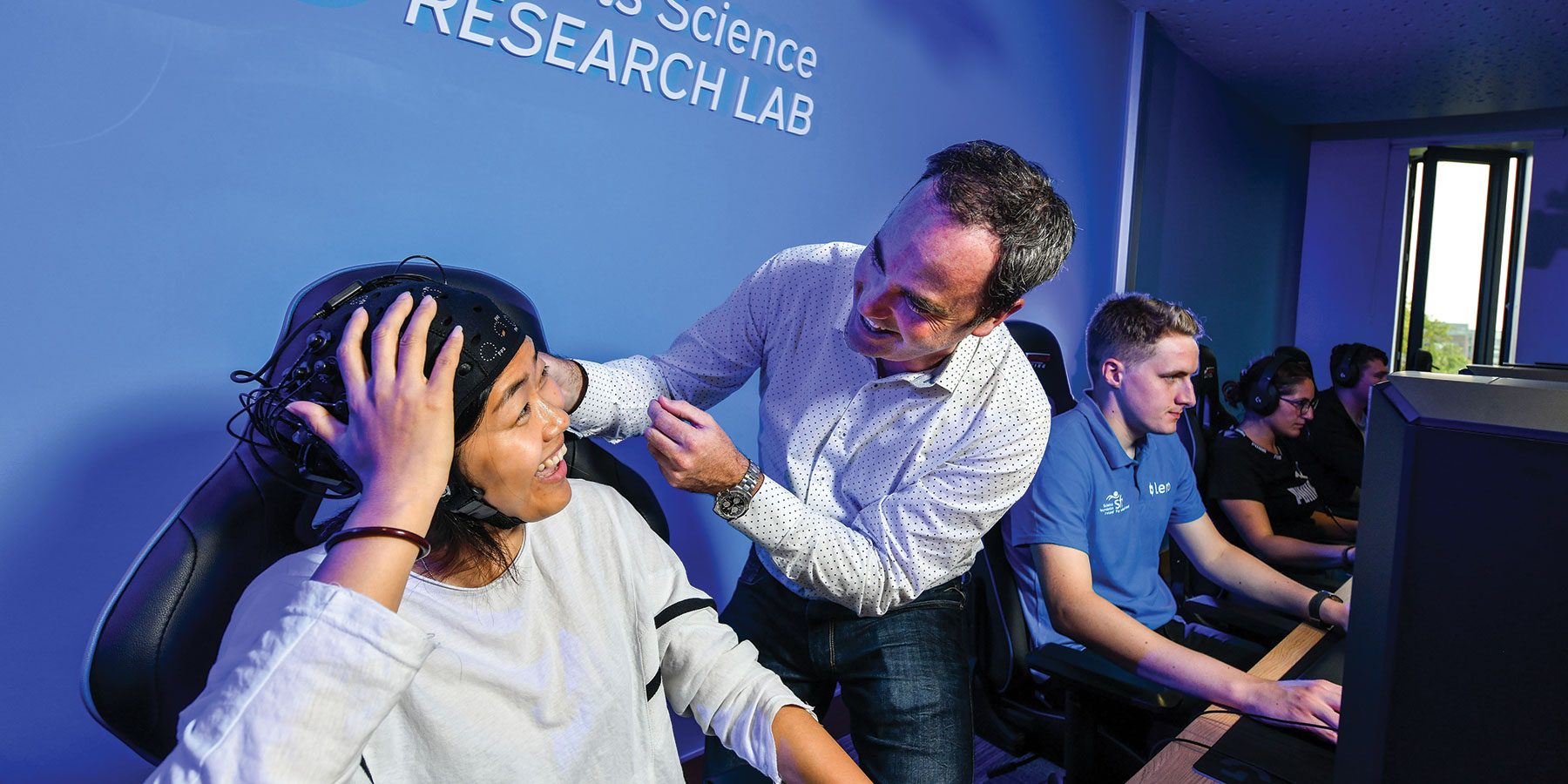 “We think that there is more to esports performance than just the assumed speed of reaction time issue, which seems to pervade the selecting of teams and individuals onto rosters,” Campbell says.

In recently published work, Campbell and his team argue that, so far, esports careers are “notoriously short and full of uncertainty.” Currently, players are considered past their prime by age 25, but the Lero researchers say the skills they gain and their tolerance for long periods of sedentary activity make them especially suited to later careers as aircraft pilots, unmanned aerial systems operators, air traffic controllers, and similar work.

At the time of writing, researchers in the lab had just completed a large study of 149 esports players, looking at the training of one key skill needed for accuracy and precision in action video games—mouse “flicking.” Not to be confused with mouse clicking, flicking allows players to aim their cursors for quick projectile shots with a rapid flick of the wrist. The Lero study involved training this skill for 10 minutes each day over eight days, controlling for factors such as sleep, caffeine intake, and other gaming, Campbell says. 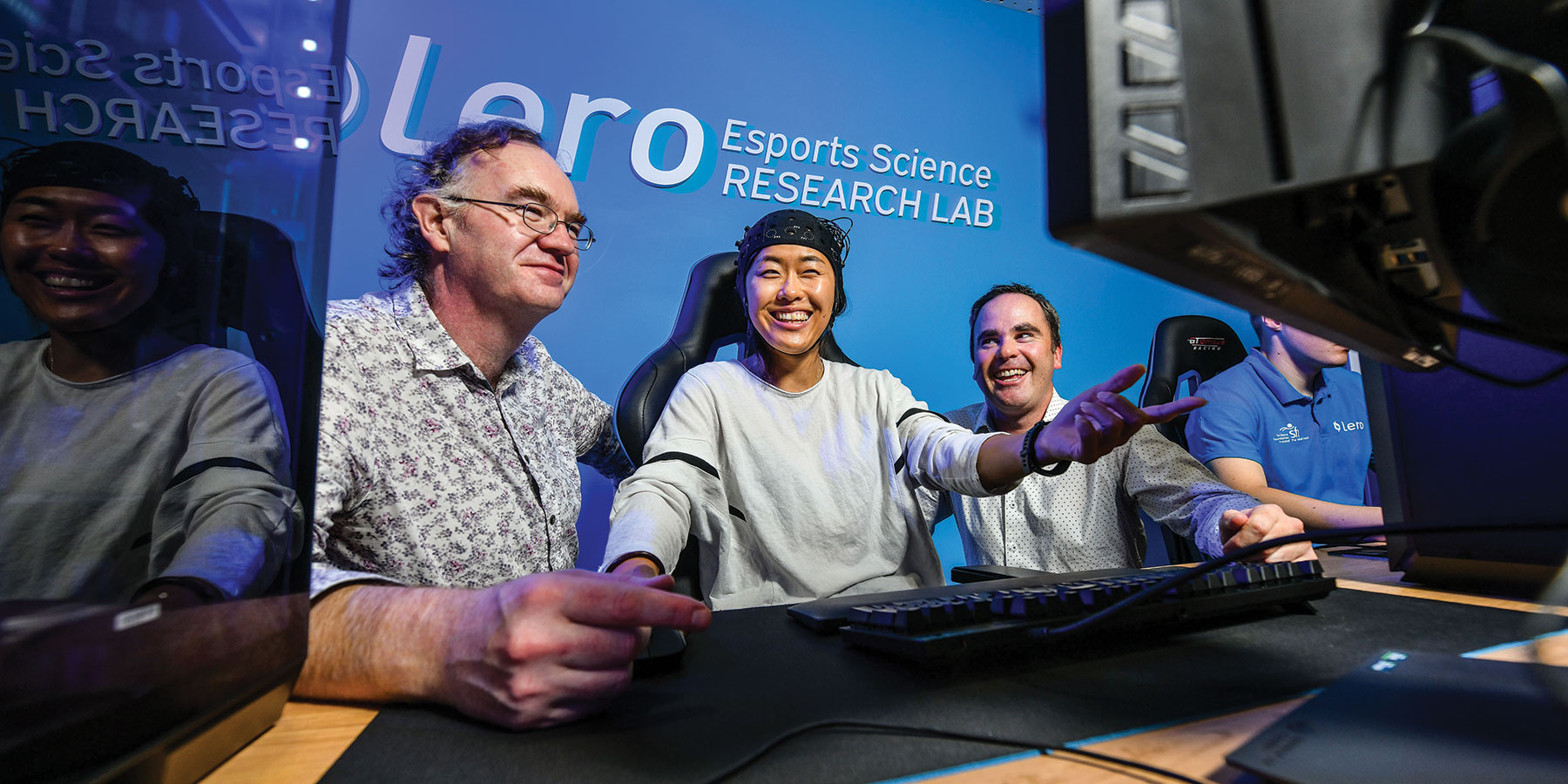 “We are very excited about our findings, which are currently under review in a high impact peer-reviewed journal,” he adds. “Immediately prior to the COVID-19 issue, we were just about to roll out another large esport skills training study based on three more of our software tests. This has been put on pause now until we get back into the lab.”

“It’s very dynamic and we challenge each other and are always learning.”

Other main technologies the lab currently uses include eye tracking, pupillometry, and brain imaging. Those brain imaging technologies include electroencephalography to measure the electrical activity in particular brain regions implicated in gaming, and functional near infrared spectroscopy, a neuroimaging technique for measuring hemodynamic response in brain regions of interest. They also use the brain stimulation methods transcranial direct current stimulation and galvanic vestibular stimulation. 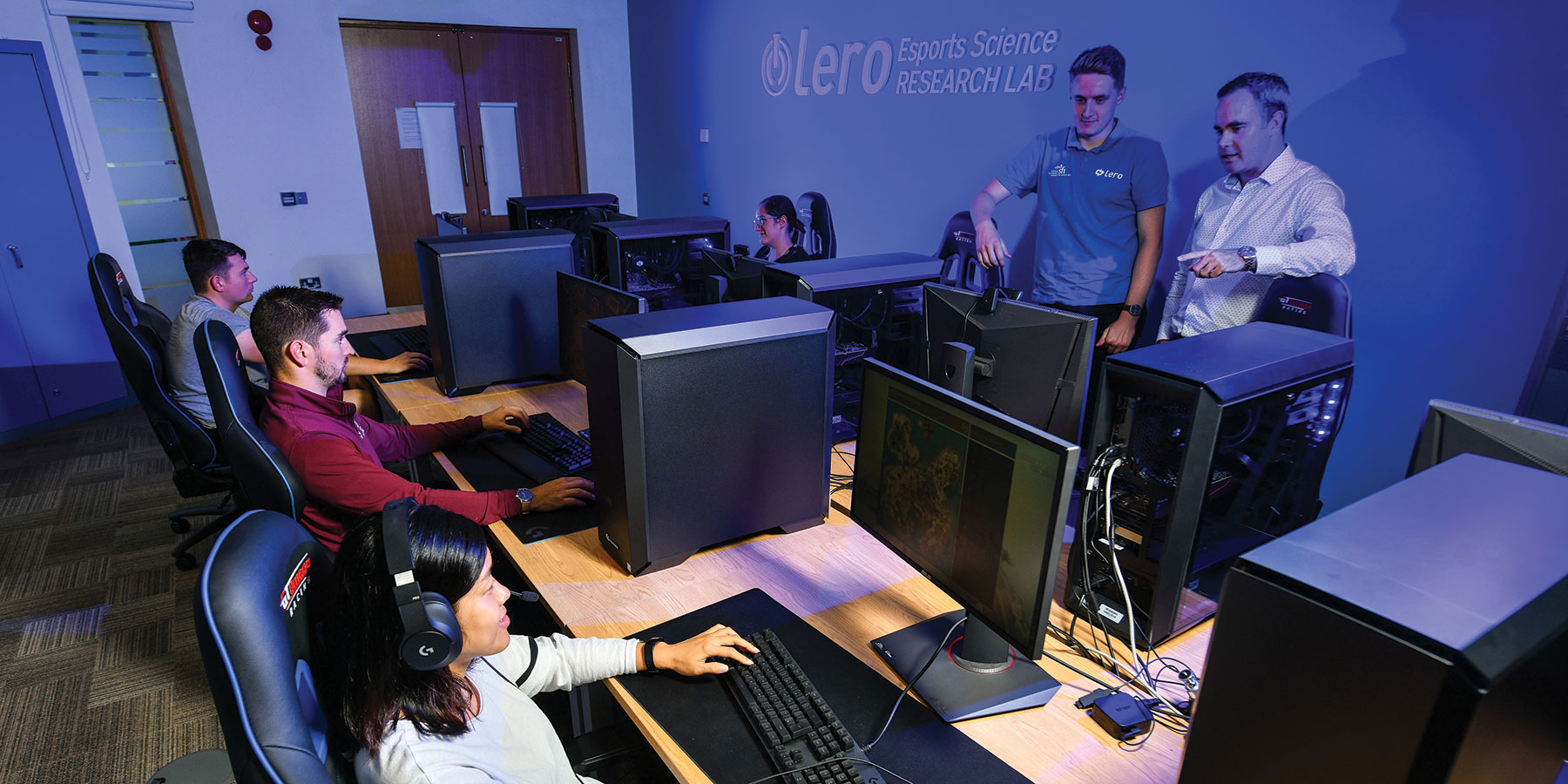 Though currently employing eight people, the lab has enough office space for 10 staff and the research space has 18 high spec gaming PCs to measure the performance of both esports teams and individual athletes.

While the lab has an uncommon research focus, the challenges it faces are similar to those of other labs. Campbell says that funding is always a hurdle as well as employee retention. Working from home due to social distancing measures put in place to manage the spread of COVID 19 has also thrown a wrench in the team’s plans as they were in the middle of experimental testing and studies, he adds. “The pandemic has allowed us to take stock though and process and write up some of our existing data,” Campbell says. “To date, we have tested over 3,000 participants, so we have some papers to get out there but [we are] eagerly anticipating a return to the lab as well.”

For Campbell, the creativity of his team and how they handle such challenges are his favorite parts of work in the lab. “It’s very dynamic and we challenge each other and are always learning,” he explains. “We have a weekly lab meeting, which is a melting pot of ideas and future studies. These are firm favorites of mine.”

Going forward, the team hopes to expand and grow the number of projects they’re working on and continue to build partnerships with industry. “There is so much scope moving forward,” Campbell says. “We have a number of industry collaborations so I would love to see more of this collaborative work and projects come to fruition. And shiny new equipment is always most welcome.”