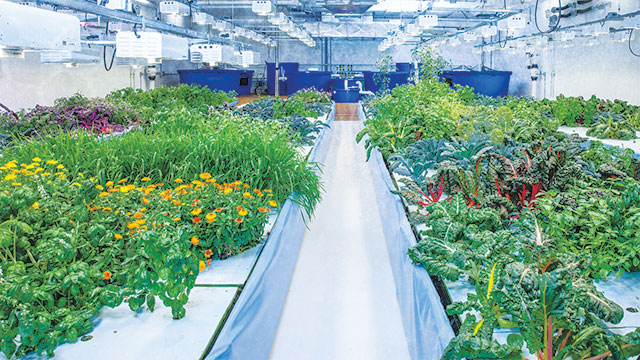 Where the Landscape, Architecture, and Fish Waste Combine to Produce Medical Marijuana

However, one licensed producer of medical cannabis based in Flamborough, Ontario, Canada, certainly has a unique method of growing its plants.

Green Relief Inc. is Canada’s first facility to use aquaponics to grow medical cannabis, and once it adds its second building of 210,000 square feet, it will be one of the largest aquaponics facilities in North America. Basically, the facility uses solid waste produced by its 7,000 fish as food for the plants.

“The finished product from my system I’m calling ‘better than organic’ because there are no inputs in our system,” says Warren Bravo, who recently founded Green Relief with his business partner, Steve LeBlanc. “An aquaponics system eventually matures into a balanced ecosystem where the addition of nutrients and chemicals is simply not required, resulting in a very natural product.”

The company became a Health Canada licensed producer of medical marijuana through the Medical Marijuana Producers Regulations (MMPR) in February and is currently in the “cultivation only” stage of the process. That means Green Relief can’t sell its product until it completes independent testing on its first batch of product and passes a Health Canada inspection, expected to take place at the end of May at the time of writing.

“We’ve just been authorized by Health Canada to be able to import wholesale product from other licensed producers in Canada and then retail it out to our patients,” Bravo adds. “So before my plants are ready for testing, which will be approximately seven to eight weeks from now, I’ll hopefully be able to get other people’s product in and start getting a revenue stream.”

Once the second building is complete, Green Relief will add 50,000 tilapia fish to the aquaponics system, which will occupy around 50,000 square feet of the new building. The company will also be focusing on developing different types of aquaculture farm products, including freshwater prawns and potentially other types of fish, such as barramundi, Bravo explains.

In addition, the new building will have 9,000 square feet dedicated to research and development, including a plant tissue culture lab to improve propagation production and develop different proprietary strains of cannabis.

“Tissue culturing will be necessary for us because we will need about 7,000 clones a week to support the growth that we’ll have in our second building,” Bravo says. “If we had to propagate from cuttings from mother plants, we would need far too many mother plants.” He adds that the tissue culture lab will also help maintain product consistency.

“We want to make sure our THC [tetrahydrocannabinol] and CBD [cannabidiol] analyses are consistent from batch to batch with very little fluctuation,” Bravo says. “We are striving to produce pharmaceutical-grade products from our facility.”

The other unique aspect of the facility is its design, which was developed by Bravo’s wife, Lyn, a University of Guelph landscape architecture graduate. Using the rolling hills on the Green Relief property to earth-shelter the buildings, green roofs, spray-foam insulation, and a few million dollars of HVAC equipment, Green Relief has created a highly controlled growing environment for its plants.

“We can control the indoor environment perfectly every day, no matter if it’s +30°C or -30°C outside, it makes no difference to us,” Bravo says, adding that the aquaponics system isn’t limited to growing just cannabis, but can grow anything from lettuce to banana trees. “There’s nothing I can’t grow in this system … and grow prolifically.”

Inside, the facility is using 100 percent LED lighting with blue, white, and red spectrums of light to grow the plants. This lighting system gives Green Relief staff the ability to create “light recipes” for better plant production, health, and yields.

Coming from the concrete construction business, Bravo and LeBlanc have gone through many learning curves in starting Green Relief.

“Steve and I are not aquaculture people and we don’t have a science background, so everything we’ve learned has been from the school of hard knocks,” Bravo says, adding that he and LeBlanc have taken a number of courses to broaden their knowledge and have brought in experienced staff for the growing side of things. However, the aquaculture side was more of a challenge, as there are few companies doing aquaponics on such a large commercial scale.

“You learn pretty quickly because you have living creatures that you have to deal with, and we certainly take that very seriously,” Bravo says. “In our system, water quality is paramount because happy fish will make happy plants.”

The facility’s aquaponics system comes from a Wisconsin company called Nelson and Pade, run by Rebecca Nelson and John Pade, who have been a huge resource for Green Relief, providing training as well as scientific and production advice along the way. They’ve also brought in aquaponics experts Dr. Nick Savidov of Lethbridge University and Dr. Charlie Schultz of the Virgin Islands.

“They’ve both been to the facility, giving us a lot of positive information on how to deal with oxygenation, stocking density, organic beneficial bacteria, and many other issues,” Bravo explains. “We are also working with University of Guelph researchers who are going to be conducting research at our aquaponics facility on aquaponics and LED lighting in growing environments.”

For the future, the Green Relief team just wants to keep advancing aquaponics, medical cannabis, and sustainable agriculture. As a philanthropic goal, they plan on bringing aquaponics systems to communities that can’t grow or obtain fresh vegetables.

“We can assist communities by repurposing buildings, installing indoor growing environments using aquaponics, and training people to work with the aquaponics systems,” Bravo says. “Producing a much higher yield per acre and utilizing 90 percent less water than traditional agriculture, aquaponics may well be the perfect solution to providing fresh organic fish and produce to urban communities year-round.”