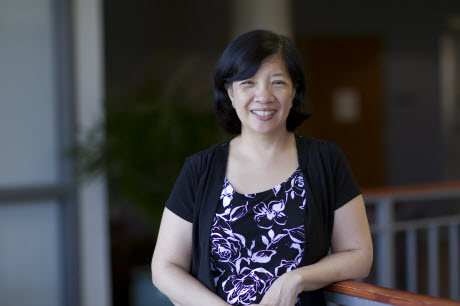 Jenny P.Y. Ting, PhD, is a UNC Lineberger member and the William Rand Kenan Jr. Distinguished Professor of Genetics.Photo courtesy of the University of North Carolina at Chapel Hill School of MedicineBeneficial bacteria may be the key to helping to reverse a cycle of gut inflammation seen in certain inflammatory bowel diseases, University of North Carolina Lineberger Comprehensive Cancer Center researchers have found.

In a study published in journal Nature Immunology, researchers led by Jenny P.Y. Ting, PhD, Lineberger member and the William Rand Kenan Jr. Distinguished Professor of Genetics, describe how inflammation can go unchecked in the absence of a certain inflammation inhibitor called NLRP12. In a harmful feedback loop, this inflammation can upset the balance of bacteria living in the gut—part of the community of micro-organisms in the human body known as the microbiome. They found in preclinical models that certain types of “bad” bacteria were more abundant, while there were lower levels of beneficial bugs in the absence of NLRP12. That led to even more inflammation in their models.

But researchers found that adding back a type of beneficial bacteria that normally grows in the gut can help end this cycle, suggesting a new treatment for inflammatory bowel disease.

“At this point we have limited treatment options and no cure for people with inflammatory bowel disease,” said Justin E. Wilson, PhD, research assistant professor in the UNC School of Medicine Department of Genetics and co-first author of the study. “These diseases can be really difficult, impacting patients’ quality of life and their finances. We suggest a possible simple fix for people who have a specific disease signature.”

The two most common inflammatory bowel diseases, Crohn’s disease and ulcerative colitis, affect an estimated 1.6 million people in the United States, according to the Crohn’s & Colitis Foundation of America. They can lead to diarrhea, fatigue, and abdominal cramping. People with ulcerative colitis or Crohn’s disease involving the colon have higher risk of colon or rectal cancer. Scientists know that these diseases involve the immune system reacting abnormally to food, bacteria, or other materials in the intestines.

UNC Lineberger researchers found a key role for a certain protein called NLRP12 in regulating the inflammation seen in these diseases.

NLRP12 has been known to suppress inflammatory signals to prevent an overactive immune response. But an analysis uncovered low levels of NLRP12 in twins with ulcerative colitis but not in paired twins without the disease. And in mouse models that lacked this protein, they found higher levels of inflammation in the colon.

UNC Lineberger researchers compared levels of inflammation in laboratory models with NLRP12, an inflammation regulator, and in models that lacked the gene for this protein.Photo courtesy of the University of North Carolina Lineberger Comprehensive Cancer CenterIn the absence of this protein, they also saw changes in the types of bacteria living in the gut—suggesting a role for the protein in keeping the microbiome in balance to prevent inflammation.

“What we found was that these mice not only were missing NLRP12, but they had a completely different composition of bacteria in their gut, and that composition is more pro-inflammatory,” Wilson said.

Patients with inflammatory bowel disorder have a similar microbial profile.

“NLRP12 is a checkpoint for the immune system—it checks the level of inflammation,” said Liang Chen, a doctoral student in the Ting lab and the other co-first author on the paper. “If you’re missing that, then you have excessive colon inflammation, and it contributes to disease. But it’s not just the absence of NLRP12, it’s also the interaction of this protein with the gut bacteria.”

To reverse this negative cycle, they found they could add back more of the so-called “friendly” bacteria or use treatments that target inflammatory signals. They believe their findings could potentially lead to treatments for people with inflammatory bowel diseases with reduced NLRP12 expression.

“You can target the inflammation that’s downstream of NLRP12 with anti-inflammatory drugs, or you could just feed the animals specific bacteria that are benefit, and it causes a shift that made them less susceptible to disease,” Wilson said. “We could potentially screen people for reduced expression of NLRP12, or who have this bacterial signature. Could this be a relatively simple fix for people who have this signature of the disease? At least, it appears to be the case in animals.”

The study was supported by the National Institutes of Health (NCI, NIAID, NIDDK), the Crohn’s and Colitis Foundation of America, the American Cancer Society, and the National Multiple Sclerosis Society.