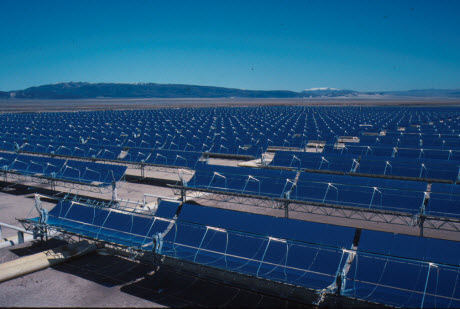 "The proposed hydricity concept represents a potential breakthrough solution for continuous and efficient power generation," said Rakesh Agrawal, Purdue University's Winthrop E. Stone Distinguished Professor in the School of Chemical Engineering, who worked with chemical engineering doctoral student Emre Gençer and other researchers. "The concept provides an exciting opportunity to envision and create a sustainable economy to meet all the human needs including food, chemicals, transportation, heating and electricity."

Hydrogen can be combined with carbon from agricultural biomass to produce fuel, fertilizer and other products.

"If you can borrow carbon from sustainably available biomass you can produce anything: electricity, chemicals, heating, food and fuel," Agrawal said.

Findings are detailed in a research paper appearing this week (Dec. 14) in the online early edition of Proceedings of the National Academy of Sciences.

Hydricity uses solar concentrators to focus sunlight, producing high temperatures and superheating water to operate a series of electricity-generating steam turbines and reactors for splitting water into hydrogen and oxygen. The hydrogen would be stored for use overnight to superheat water and run the steam turbines, or it could be used for other applications, producing zero greenhouse-gas emissions.

"Traditionally electricity production and hydrogen production have been studied in isolation, and what we have done is synergistically integrate these processes while also improving them," Agrawal said.

In superheating, water is heated well beyond its boiling point – in this case from 1,000 to 1,300 degrees Celsius - producing high-temperature steam to run turbines and also to operate solar reactors to split the water into hydrogen and oxygen.

"In the round-the-clock process we produce hydrogen and electricity during daylight, store hydrogen and oxygen, and then when solar energy is not available we use hydrogen to produce electricity using a turbine-based hydrogen-power cycle," Tawarmalani said. "Because we could operate around the clock, the steam turbines run continuously and shutdowns and restarts are not required. Furthermore, our combined process is more efficient than the standalone process that produces electricity and the one that produces and stores hydrogen."

The system has been simulated using models, but there has been no experimental component to the research.

"The overall sun-to-electricity efficiency of the hydricity process, averaged over a 24-hour cycle, is shown to approach 35 percent, which is nearly the efficiency attained by using the best photovoltaic cells along with batteries," Gençer said. "In comparison, our proposed process stores energy thermo-chemically more efficiently than conventional energy-storage systems, the coproduced hydrogen has alternate uses in the transportation-chemical-petrochemical industries, and unlike batteries, the stored energy does not discharge over time and the storage medium does not degrade with repeated uses."

Agrawal said, "The concept combines processes already developed by other researchers while also improving on these existing processes. The daytime and night-time systems would use much of the same equipment, allowing them to segue seamlessly, representing an advantage over other battery-based solar technologies."

The research has been funded by the U.S. Department of Energy through the DOE's Center for Direct Catalytic Conversion of Biomass to Biofuels at Purdue's Discovery Park and through a "Solar Economy" project led by Agrawal under the National Science Foundation's Integrative Education and Research Traineeship Program.