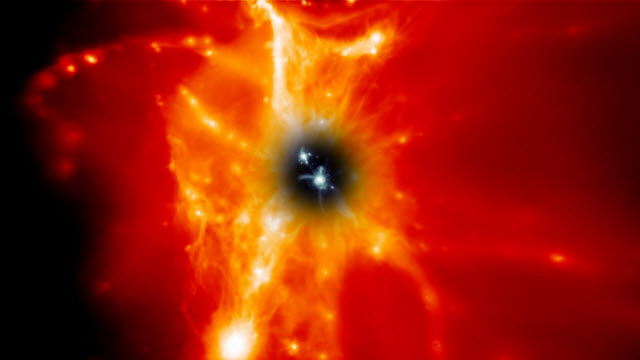 Spiral galaxies like the Milky Way are shown in the center, surrounded by the circumgalactic medium, which appears as black to our eyes. However, the circumgalactic medium contains very hot gas, shown in red, orange, and white that outweighs the central galaxies. The Cosmic Origins Spectrograph on the Hubble Space Telescope is an ultra-violet spectrograph that can probe these gaseous filaments and clumps.Image Courtesy of: Adrien Thob, LJMU

Galaxies "waste" large amounts of heavy elements generated by star formation by ejecting them up to a million light years away into their surrounding halos and deep space, according to a new study led by the University of Colorado Boulder.

The research, which was recently published online in the Monthly Notices of the Royal Astronomical Society, shows that more oxygen, carbon, and iron atoms exist in the sprawling, gaseous halos outside of galaxies than exist within the galaxies themselves, leaving the galaxies deprived of raw materials needed to build stars and planets.

"Previously, we thought that these heavier elements would be recycled in to future generations of stars and contribute to building planetary systems," said Benjamin Oppenheimer, a research associate in the Center for Astrophysics & Space Astronomy (CASA) at CU-Boulder and lead author of the study. "As it turns out, galaxies aren't very good at recycling."

The near-invisible reservoir of gas that surrounds a galaxy, known as the circumgalactic medium (CGM), is thought to play a central role in cycling elements in and out of the galaxy, but the exact mechanisms of this relationship remain elusive. A typical galaxy ranges in size from 30,000 to 100,000 light years while the CGM can span up to a million light years.

The researchers used data from the Cosmic Origin Spectrograph (COS), a $70 million instrument designed at CU-Boulder and built by Boulder, Colorado-based Ball Aerospace Technology Corp., to study the composition of the CGM.

COS is installed on NASA's Hubble Space Telescope and uses ultraviolet spectroscopy to study the evolution of the universe.

Spiral galaxies like the Milky Way actively form stars and have a blueish color while elliptical galaxies have little star formation and appear red. Both types of galaxies contain tens to hundreds of billions of stars that create heavy elements.

After running a series of simulations, the researchers found that the CGMs in both types of galaxies contained more than half of a galaxy's heavier elements, suggesting that galaxies are not as efficient at retaining their raw materials as previously thought.

"The remarkable similarity of the galaxies in our simulations to those targeted by the COS team enables us to interpret the observations with greater confidence," said Robert Crain, a Royal Society University Research Fellow at Liverpool John Moores University and a co-author of the study.

The new simulations also explain the puzzling COS observation that there appears to be less oxygen around elliptical than spiral galaxies.

"The CGM of the elliptical galaxies is hotter," said Joop Schaye, a professor at Leiden University in the Netherlands and a co-author of the study. "The high temperatures, topping over one million degrees Kelvin, reduce the fraction of the oxygen that is five times ionized, which is the ion observed by COS."

By contrast, the temperature of the CGM gas in spiral galaxies is 300,000 degrees Kelvin, or around fifty times hotter than the surface of the Sun.

"It takes massive amounts of energy from exploding supernovae and supermassive black holes to launch all these heavy elements into the CGM," said Oppenheimer. "This is a violent and long-lasting process that can take over 10 billion years, which means that in a galaxy like the Milky Way, this highly ionized oxygen we're observing has been there since before the Sun was born."