OSAKA, JAPAN — Scientists at Osaka University built a new computing device from field-programmable gate arrays (FPGA) that can be customized by the user for maximum efficiency in artificial intelligence applications. Compared with currently used rewireable hardware, the system increases circuit density by a factor of 12. Also, it is expected to reduce energy usage by 80 percent. This advance may lead to flexible artificial intelligence (AI) solutions that provide enhanced performance while consuming much less electricity.

AI is becoming a part of everyday life for almost all consumers. Ridesharing smartphone apps like Uber, Gmail's spam filters, and smart-home devices like Siri and Nest all rely on AI. However, implementing these algorithms often require a large amount of computing power, which means large electricity bills, as well as big carbon footprints. Systems that could—like the human brain—be rewired to optimize the computer circuitry for each task would provide greatly enhanced energy efficiency. 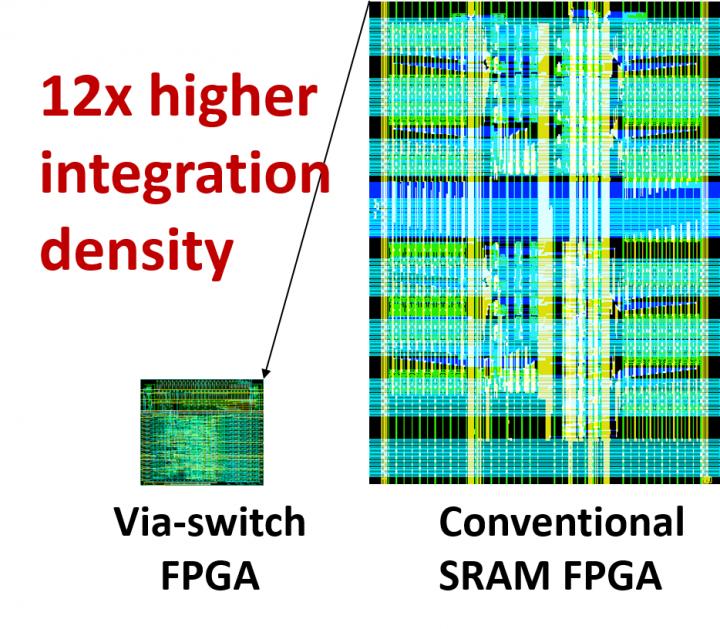 Normally, we think of hardware, which includes the physical logic gates and transistors of a computer's processor, as fixed by the manufacturer. However, field-programmable gate arrays are specialized logical elements that can be rewired "in the field" by the user for custom logic applications. The research team used non-volatile "via-switches" that remain connected until the user decided to reconfigure them. Using novel nanofabrication methods, they were able to pack twelve times more elements into a grid-like "crossbar" layout. By reducing the distance electronic signals need to be routed, the devices ended up needing 80 percent less power.

"Our system based on field-programmable gate arrays has a very fast design cycle. It can be reprogrammed daily if desired to get the most computing power for each new AI application," first author Masanori Hashimoto says. The use of via-switches also eliminates the need for the programing silicon area that was necessary in previous FPGA devices.