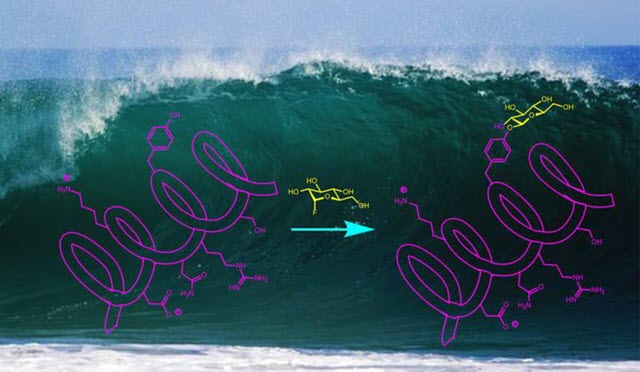 Scientists have developed a new approach to glycosylation that works in waterCredit: Yale University

In the world of chemistry, good things can happen if you just add sugar.

A wide range of drugs and biochemical probes—everything from antibiotics to Alzheimer's disease biomarkers—rely on natural or synthetic compounds that aid a reaction by adding carbohydrates. It's a process called glycosylation. But it is traditionally a highly specific process that makes synthesis of such compounds, for testing or large-scale production, difficult.

A team of Yale University scientists has developed a new approach to glycosylation that is remarkably simple and works in water at room temperature. A study describing the process appears in the online edition of Nature Chemistry.

"Glycoproteins serve a myriad of functions in biological chemistry," said Scott Miller, the Irénée du Pont Professor of Chemistry at Yale and co-corresponding author of the study. "Synthesis of these compounds is very challenging, and has limited the extent to which people can make multiple variants in order to find the best biochemical probes and therapeutics."

Alanna Schepartz, Sterling Professor of Chemistry at Yale and the study's other co-corresponding author, points out that many glycoprotein molecules are currently made using an enzyme catalyst. The Yale team's approach does not require an enzymatic reaction, allowing the process to be generalized to create large numbers of different compounds.

Another advantage of the new process, the researchers said, is that it occurs in water as the solvent. Often, organic synthesis of bioactive compounds happens in non-aqueous solvents, because water has a tendency to react with many catalysts and chemical agents.

"There is enormous interest right now in strategies to perform selective chemistry on complex biomolecules in water and also in cells," Schepartz said. "This paper lays a strong foundation that we and others can build upon to develop novel and useful chemistry."

The first author of the study is Tyler Wadzinski, a graduate student in Miller's lab. Co-authors, all of Yale, are Angela Steinauer, Liana Hie, and Guillaume Pelletier.

"This is truly a collaborative study that blends expertise in chemical reaction development and biological chemistry," Miller said.