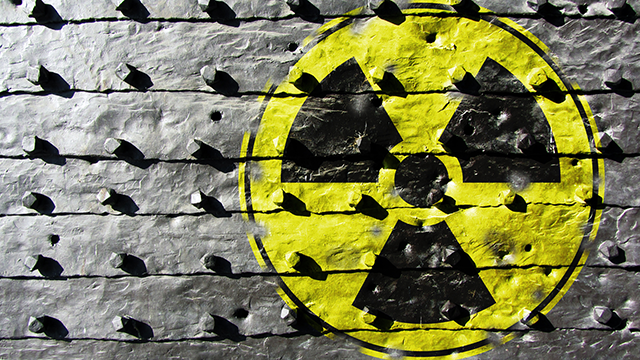 For half a century, researchers have seen loops of displaced atoms appearing inside nuclear reactor steel after exposure to radiation, but no one could work out how.

Now, a simulation done by researchers at the University of Michigan, Hunan University (China), and Rensselaer Polytechnic Institute has shown that a shockwave produces these loops in iron. The result could help engineers design better radiation-resistant steel for reactors—or stronger steel in general.

Iron and steel, like most metals, organize themselves in a crystal lattice—an arrangement of atoms based on a repeated pattern. In this case, it's a cube with an atom at each corner and one in the center. Radiation and other stresses can create a variety of defects.

In "loop" defects, the out-of-place atoms form rough rings. Some loops can travel through the lattice, and their mobility means that they don't get in the way of the steel bending. But the defect in question (known as a <100> interstitial dislocation loop) tends to stay put. Placed in an uncontrolled way, these stationary loops cause brittleness, but if they were placed deliberately, they could strengthen steel by improving its stiffness.

"Now that we know the mechanism, we can reduce radiation damage by limiting the energy of the particles that materials are exposed to," said Qing Peng, a research fellow in the lab of Fei Gao, a professor of nuclear engineering and radiological sciences.

"We can also use it to engineer the defect inside materials. Depending on the energy, you can generate different types of dislocations to tune the material's properties."

Five earlier explanations are in the running to account for the mysterious loops, but none is particularly satisfying because they all require special conditions and relatively long times to create the loops.

Since the defects appear too quickly to measure, researchers expected that they would be able to simulate the mechanism on a computer. But that didn't happen either. They supposed that it took too long to map out their real time trajectories—there just wasn't enough power to simulate all those atoms in a reasonable time.

That last observation turned out to be partially true: there were too many atoms to model. But the process itself was short; the trouble was making the volume of iron big enough to get the reaction.

"If the simulation is too small, a high-energy particle just passes through. No reaction," Peng said.

Gao's team created a computer model of a box of 200 million iron atoms, arranged in the typical lattice, and slammed a high energy particle into it. What they saw was a powerful shockwave ripping through the lattice, branching out in different directions.

Millions of iron atoms were displaced from their spots, and millions of them fell back into the lattice as the wave dissipated. Left behind were hundreds of "point" defects in which single atoms were out of place—and a handful of loops. Many of these were loops that can travel, which aren't a major cause of brittleness, but often one or two were the stationary type.

It turned out that the loops were created in the initial shockwave, a process that takes just 13 trillionths of a second or so. This explanation was floated as early as 40 years ago, but it was used to explain defects that appeared in lines rather than closed loops.

Now that the mechanism is known, similar computer modeling may be used to recommend operating conditions for steel alloys in environments with radiation. Less energetic particles won't create shockwaves strong enough to produce this defect.

Or, defects like this can be deliberately placed in steel to enhance its rigidity. These stationary loops of atoms, jammed in between other atoms in the crystal, make it harder for steel to bend.

How to Properly Manage Power When Setting up a New Lab

How to Properly Manage Power When Setting up a New Lab