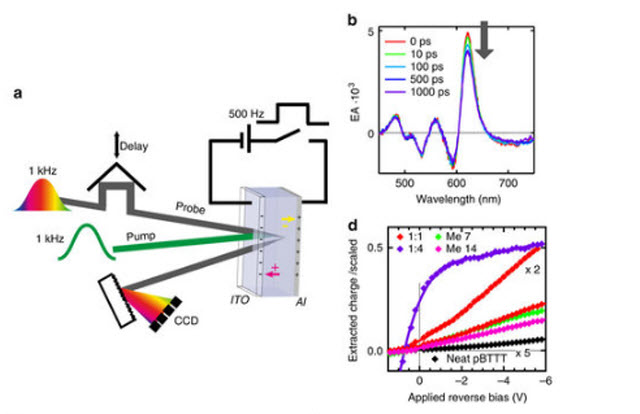 (a) Schematic representation of the set-up used for time-resolved EDA spectroscopy on full solar cell devices under reverse bias. (b) Typical decay of the EA spectrum obtained for pBTTT:PCBM (1:1 by weight, processed with Me 7, −6 V applied bias) at different time delays after excitation at 540 nm.Image Courtesy of: ECOLE POLYTECHNIQUE FÉDÉRALE DE LAUSANNE

In a photovoltaic cell, light generates opposite charges in the active layer. The charges must then be separated as quickly as possible to keep them from recombining. Positive charges are driven by a built-in electric field to one metallic contact, while negative charges migrate in the opposite direction to another electrode. Using a unique ultra-fast spectroscopic technique, EPFL scientists have now been able to track the fate of charged pairs in an advanced type of solar cells currently under intense research. The work is published in Nature Communications.

Natalie Banerji at Jaques Moser's lab at EPFL used ultrafast time-resolved electroabsorption spectroscopy (TREAS) to follow the fate of charge pairs photogenerated in polymer:fullerene blends used in plastic solar cells. TREAS has been developed in Moser's lab during the last three years. It allows real-time measurements of the separation distance of charges generated by light in the active layer of a photovoltaic solar cell.

The technique relies on the optical probing of the effective electric field experienced by a material. An external field is applied to the device and affects the absorption spectrum of materials that make up its photoactive layer. The effect is known as "electroabsorption" or the "Stark effect".

An ultrashort laser pulse then generates charges. These begin to separate, inducing a counter electrical field that opposes the externally applied one. As a result, a decrease of the amplitude of the electroabsorption signal can be detected in real time with pico- to femto-second resolution.

The data from the study create a better understanding of the mechanisms of light-induced charge separation in this type of photovoltaics, as well as of the effect of the morphology of the polymer:fullerene blend, which is necessary for designing more efficient solar energy converters.