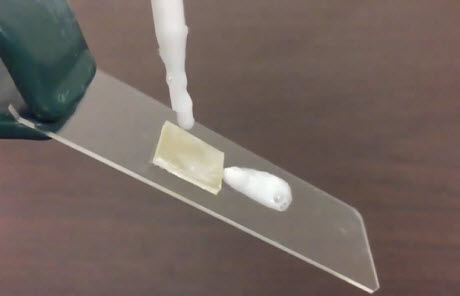 Engineers at Ohio State University have invented a coating to help soap pour out of plastic bottles more easily. Here, a drop of shampoo slides off a piece of polypropylene.Image from a video by Philip S. Brown, courtesy of Ohio State UniversityCOLUMBUS, Ohio—It’s one of life’s little annoyances: that last bit of shampoo that won’t quite pour out of the bottle. Or the last bit of hand soap, or dish soap, or laundry detergent.

Now researchers at Ohio State University have found a way to create the perfect texture inside plastic bottles to let soap products flow freely. They describe the patent-pending technology in a paper to appear in the journal Philosophical Transactions of the Royal Society on June 27.

The technique involves lining a plastic bottle with microscopic y-shaped structures that cradle the droplets of soap aloft above tiny air pockets, so that the soap never actually touches the inside of the bottle. The “y” structures are built up using much smaller nanoparticles made of silica, or quartz—an ingredient in glass—which, when treated further, won’t stick to soap.

If it sounds like engineers Bharat Bhushan and Philip Brown went to a lot of trouble to solve this problem, you’re right. But the solution they found is actually simpler and less expensive than alternatives under development elsewhere. And it works for a common plastic used to package foodstuffs and household goods: polypropylene.

“It’s what you’d call a first-world problem, right? ‘I can’t get all of the shampoo to come out of the bottle.’ But manufacturers are really interested in this, because they make billions of bottles that end up in the garbage with product still in them,” said Bhushan, Ohio Eminent Scholar and Howard D. Winbigler Professor of mechanical engineering at Ohio State.

Coatings already exist to help food, but not soap, pour out of their containers, he said. “Compared to soaps, getting ketchup out of a bottle is trivial. Our coating repels liquids in general, but getting it to repel soap was the hard part.”

But surfactants—the organic molecules that make soap “soapy”—are just the opposite: They have a very low surface tension and stick to plastic easily, explained Brown, a postdoctoral fellow.

“It was an extra challenge for us to make a surface that could repel surfactant,” he agreed.

Their goal, which was suggested by a commercial shampoo manufacturer, was to create a shampoo bottle lining that was cheap, effective and environmentally friendly.

Soap and shampoo clean our skin and hair by bonding chemically with both oil and water, so the surface oils that were on our bodies wash off when we rinse. The same goes for dishes. During clothes washing, detergent performs double-duty, releasing oils and also helping water penetrate fabrics. It’s that tenacity that makes the last drops of surfactant cling to the insides of bottles. 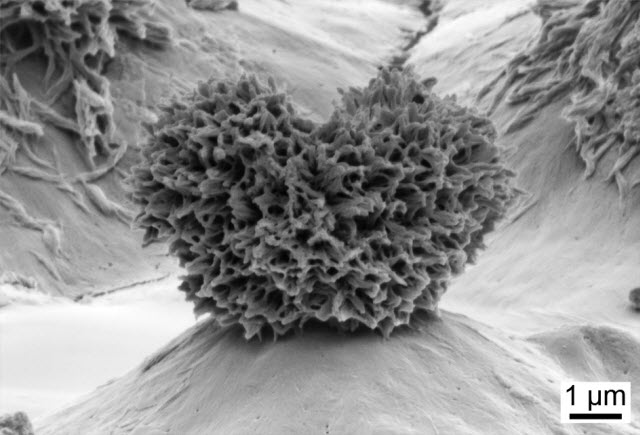 Silica nanoparticles embedded in a piece of polycarbonate form puffy, y-shaped structures that cradle droplets of soap and prevent them from sticking to the plastic below. Researchers at The Ohio State University have made similar advances with making soap slide off of polypropylene.Image credit: Philip S. Brown, Ohio State University

Bhushan and Brown came up with a method to spray-coat a small amount of solvent and ultra-fine silica nanoparticles onto the inside of bottles. Manufacturers already use solvents to change the texture of molded plastics, because they cause the surface of the plastic to soften a little. By mixing the silica and solvent, the researchers were able to soften the surface of the polypropylene just enough that when the plastic re-hardened, the silica would be embedded in the surface.

The structures are only a few micrometers—millionths of a meter—high, and covered in even smaller branchlike projections. They look like shaggy heart-shaped pillows, but they’re hard as glass.

They don’t cover the inside of the bottle completely, either, but instead are planted a few micrometers apart. The main branches of the “y” overhang the plastic surface at an angle less than 90 degrees—steep enough that water, oils and even surfactant can’t physically sustain a droplet shape that would fall in between the branches and touch the plastic.

Related Article: Purchasing a Viscometer: What Are the Deciding Factors?

“You end up with air pockets underneath, and that’s what gives you liquid repellency,” Brown said.

Instead of spreading out on the surface, the soap droplets form beads and roll right off.

Researchers have known for some time that a support structure with the right angle of overhang would solve this problem, and some have tried to carve the shapes into plastic manually using photolithography—the same technique that shapes computer chips.

“That’s expensive and time consuming,” Brown said. “Plus, they end up with fragile little overhangs that snap off. We embedded a hard material directly into the polymer surface, so we know it’s durable.”

Polypropylene isn’t the most common plastic bottle material, but 177 million pounds of it were made into bottles and bottle lids in the United States in 2014 alone, according to the American Chemistry Council (ACC). Aside from shampoo, soap and detergent bottles, it’s also used for yogurt tubs, ketchup bottles and medical bottles, single-serve coffee pods, and Starbucks iced beverage cups.

Polypropylene is classified as a “number 5” plastic by the Resin Identification Coding System. A recent ACC report found that recycling of number 5 plastics is on the rise, increasing from 44.2 million pounds in 2013 to 45.6 million pounds in 2014. Only about two-thirds of American curbside recycling services accept it, but commercial companies such as Preserve of Waltham, Massachusetts, and Whole Foods grocery stores nationwide are working with manufacturers and retailers to collect number 5 plastic containers and make them into useful products.

The Ohio State invention could actually aid recycling. Before plastic bottles can be recycled, they have to be rinsed completely clean, and Bhushan suspects that he’s not the only person who doesn’t bother.

“We all struggle with shampoo bottles at home,” Bhushan said. “I have a few in my shower right now. Trying to get the last drop out, I put it upside down, and my wife adds water to the bottle and fights with it for a while, and then we give up and just throw it away.”

With further development, the university hopes to license the coating technique to manufacturers—not just for shampoo bottles, but for other plastic products that have to stay clean, such as biomedical devices or catheters. They have already applied the same technique to polycarbonate, a plastic used in car headlights and smartphone cases, among other applications.