(BOSTON) — Toward the ultimate goal of engineering human tissues and organs that can mimic native function for use in drug screening, disease modeling, and regenerative medicine, a Wyss Institute team led by Core Faculty member Jennifer Lewis, Sc.D., has made another foundational advance using three-dimensional (3D) bioprinting.

This work builds upon their demonstrated ability to bioprint tissue constructs composed of multiple types of living cells patterned alongside a vascular network in an extracellular matrix. The Wyss team has also previously shown that these constructs could be scaled up to create thick, vascularized tissue constructs, sustained viable for more than a month in vitro. Now, in close collaboration with Roche scientist Annie Moisan, they have leveraged their bioprinting and materials expertise to construct a functional 3D renal architecture containing living human epithelial cells, which line the surface of tubules in the kidney. The study appears online in the journal Scientific Reports.

In this video, see how the Wyss Institute team has advanced bioprinting to the point of being able to fabricate a functional subunit of a kidney, as reported in a new study published in Scientific Reports. Video Credit: Wyss Institute at Harvard University

"The current work further expands our bioprinting platform to create functional human tissue architectures with both technological and clinical relevance," said Lewis, who is also the Hansjörg Wyss Professor of Biologically Inspired Engineering at the Harvard John A. Paulson School of Engineering and Applied Sciences.

The 3D renal architecture created by Lewis’ team mimics a proximal tubule, a serpentine hollow tube that is an essential part of each nephron. Every human kidney has over one million nephrons, which perform the vital function of transferring components between blood and urine. Inside the convolutions of a nephron’s proximal tubules, 65-80 percent of nutrients are reabsorbed and transported from the renal filtrate back into the bloodstream. Therefore, the bioprinted 3D renal architecture recapitulates a very small—yet critical—subunit of a whole kidney. 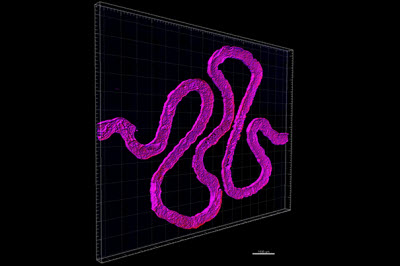 Using fugitive ink, a convoluted hollow channel is fabricated to mimic the winding shape of natural proximal tubules found inside a human kidney's nephrons.Image Credit: Lewis Lab/Wyss Institute at Harvard UniversityLewis’ team achieved this advance by adapting their earlier approach for bioprinting living cells to form thick tissues. Using a customizable, 3D-printed silicone gasket as a mold, they begin by casting an engineered extracellular matrix as a base layer. Next, a "fugitive ink" (which is eventually liquefied and removed from the final architecture) is printed in a convoluted, winding tubular shape similar to the structure of natural renal proximal tubules. This printed feature is then encapsulated with another layer of extracellular matrix.

Lewis’ team achieved this advance by adapting their earlier approach for bioprinting living cells to form thick tissues. Using a customizable, 3D-printed silicone gasket as a mold, they begin by casting an engineered extracellular matrix as a base layer. Next, a “fugitive ink” (which is eventually liquefied and removed from the final architecture) is printed in a convoluted, winding tubular shape similar to the structure of natural renal proximal tubules. This printed feature is then encapsulated with another layer of extracellular matrix.

Co-first authors of the study Kimberly Homan, PhD, a Wyss research associate, and David Kolesky, PhD, a Wyss postdoctoral fellow, stress that the most exciting aspect of the work is that—far beyond mimicking the form of the kidney’s proximal tubule—it is a credible in vitro model that functions like living kidney tissue, representing a significant advance from traditional 2D cell culture. The team devoted great effort to characterizing the structure and biological function of the model.

As a result, their approach could one day be scaled up and translated into an implant or organ-assistive device. In the near term, it may offer clinicians a patient-specific tool for assessing treatment options or diagnosing diseases and also give the pharmaceutical industry a powerful way to determine how drugs impact the health and function of the kidney’s nephrons.

"The use of functional tissue-like models during pre-clinical studies will provide unprecedented insights into human-relevant drug response prior to clinical development," said Moisan, a laboratory head in mechanistic safety at Roche and author of this study. 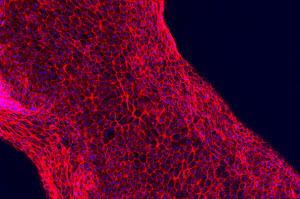 Human proximal tubule cells adhere to the hollow channel, forming a functional, 3D renal architecture.Image Credit: Lewis Lab/Wyss Institute at Harvard UniversityAs a fabrication platform, the approach is flexible, scalable, and adaptable, meaning that in addition to working towards larger, scaled-up kidney constructs, the team also plans to explore development of other types of complex functional human tissues and organs.

"We have initially targeted this renal architecture, because the kidney represents such a pressing clinical need across the world," said Lewis. "While thus far we have merely demonstrated a functioning subunit within the kidney, we are actively scaling up the method and its complexity to enable future in vivo applications."

"This advance in 3D printing of living tissues that recapitulate crucial organ functions by Jennifer and her team opens a new path to engineering model systems for drug development, as well as for creating more functional extracorporeal devices and whole organ implants in the future," said Donald Ingber, MD, PhD, Founding Director of the Wyss Institute, Judah Folkman Professor of Vascular Biology at Harvard Medical School and Boston Children’s Hospital, and Professor of Bioengineering at SEAS.

In addition to Lewis, Moisan, Homan and Kolesky, other members of the Wyss-SEAS research team and co-authors of the Scientific Reports study include: Mark Skylar-Scott, Jessica Herrmann, and Humphrey Obuobi.

The work was funded by the Wyss Institute, the Roche Postdoctoral Fellowship program, National Science Foundation EAGER, and private donations from the GETTY LAB and Dr. Stan Lindenfield.

How to Drive Innovation in the Lab

How to Drive Innovation in the Lab