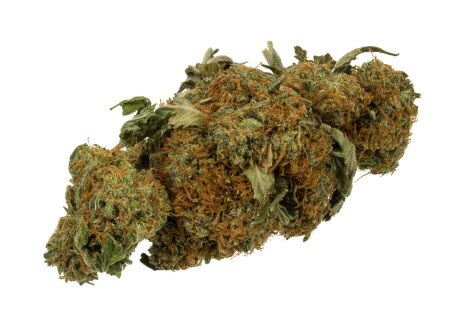 A dried flower bud of a Cannabis plant.Image credit: Evan-Amos, Wikimedia CommonsCORVALLIS, Ore. – The emergence of the legal recreational use of marijuana, in Oregon and elsewhere, has raised a wide range of questions about this drug – especially after decades of prolonged debates, some groups calling it harmless and others a “gateway” drug that should still be illegal.

At Oregon State University, pharmacological experts are helping to answer these questions. They are speaking to many public and professional groups around the state, as well as OSU pharmacy students, and trying to raise the level of medical knowledge about marijuana, based on the best available science.

That’s a challenge in itself, they say, because despite vehement arguments on both sides of these issues over many years, comparatively little valid scientific research has been done on marijuana. Some key questions remain unanswered, even though there’s evidence the drug has been used by humans for more than 4,000 years, and its use in the U.S. is now expanding significantly as legal restrictions weaken.

That being said, there’s a lot that is known.

First and foremost, today’s commercially available marijuana is not the same product that some may remember from the 1960s or 70s. It is far more potent.

“Marijuana today has a much higher content of THC, its psychoactive component, than it did in the past,” said Jane Ishmael, an associate professor of pharmacology in the OSU College of Pharmacy and a member of the Oregon Public Health Division’s Retail Marijuana Scientific Advisory Committee. Ishmael is an expert on drug action who teaches pharmacy students about drugs of abuse, ranging from alcohol to nicotine or even some over-the-counter and prescription products.

“The average THC content in marijuana decades ago used to be about 4 percent, but with years of improved cultivation techniques and plant improvements it’s now around 17 percent,” she said. “It’s even higher in some specific strains, meaning that today’s marijuana products can be at least four times stronger. For any older people who are considering use of marijuana again now that’s it’s legal, that’s something they should be aware of.”

Studies reported in the 1990s showed that the human body contains many receptor targets for THC and also produces “endocannabinoids.” Normally, the endocannabinoid system plays a role in regulation of appetite, pain control, pleasure and other sensations.

It was discovered that chemicals in marijuana, such as THC, bind to cannabinoid receptors in the brain and modulate the release of other neurotransmitters. These actions explain many of the biological impacts of marijuana for sensations of pleasure, its medicinal potential, and other aspects of neurobiology.

“One thing that people must understand is that marijuana is a recreational drug,” Ishmael said. “We’ve now chosen to make it legal, but like other drugs such as alcohol, that’s not synonymous with saying it’s completely safe and harmless. If people choose to use it, they should understand how it works, what it does, and when or with whom it should not be used.”

Among key points to consider, the experts said:

Some reliable information is now emerging about the medicinal use of marijuana to improve symptoms in a variety of chronic conditions, the researchers said.

There is evidence that marijuana can aid with some types of pain control, such as painful muscle spasms associated with multiple sclerosis and neuropathic pain. It can also help relieve nausea and vomiting associated with chemotherapy, although other drugs are now available with similar effectiveness for that purpose. And it has been shown to improve quality of life in patients struggling with loss of appetite and maintaining body weight, including AIDS patients.

“Frankly, there’s still a lot we don’t know,” Ishmael said. “Marijuana contains more than 400 chemicals and we’ve focused most research just on one of them. Hopefully some future research will help better inform us about the complete range of effects, whether positive or negative.”

Roberto Linares, a senior instructor in the OSU College of Pharmacy who is also on the Oregon Board of Pharmacy, said that the legalization of marijuana will pose many challenges for medical experts in the near future.

“Pharmacies have not yet shown interest in distributing it, in part because that could conflict with the federal laws that apply to their operation,” Linares said. “But people will be coming to their doctors, to their pharmacists and other health professionals, with a lot of reasonable questions if they choose to use legalized marijuana. That’s one reason we’re trying to put out as much valid information as we can.”

Another issue almost completely unexplored, the researchers said, is the interaction of marijuana with many other legal medications. Entire books and computer programs exist with most drugs to help pharmacists analyze precisely how they might interact with another drug. With marijuana, that’s mostly a blank page.

“One other thought that people should consider is that everyone is an individual,” Ishmael said. “People’s reactions to drugs vary widely, it’s not easily predictable. With some, the effects of marijuana use will be much more intense than with others. That should be kept in mind by anyone who is considering its use.”