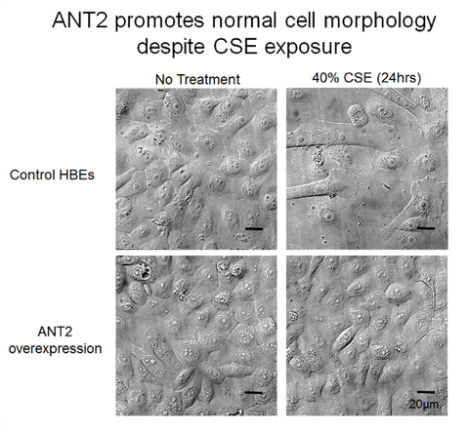 ANT2 maintains normal cell morphology of human bronchial epithelial cells after 40% cigarette smoke extract after 24 hours.Image credit: Kliment et al. 2015Everyone knows that cigarette smoke is bad for your lungs. Just how bad can be seen in chronic obstructive pulmonary disease (COPD), the third leading cause of death in the U.S. Air pollution and other airborne irritants can be a factor but the National Institutes of Health is unequivocal—cigarette smoking is the leading cause of COPD. Despite its prevalence and ongoing research into COPD, there is no cure, current treatments are largely palliative, and new treatment targets are scarce. Now Corrine Kliment and colleagues in Doug Robinson’s lab at Johns Hopkins University have found two new targets in a surprising place—amoebas. The researchers will present at ASCB 2015 in San Diego on Monday, December 14.

The social amoeba, Dictyostelium discoideum (or “Dicty”), is a great model for human COPD, the Hopkins researchers say, because it reacts so strongly and predictably to cigarette smoke or its laboratory form, cigarette smoke extract (CSE). The CSE damages Dicty’s cytoskeleton and metabolism, bedrock cell processes that it shares with its very distant evolutionary cousins, humans. CSE causes Dicty to slow its growth dramatically and in a concentration-dependent manner. That gave the researchers a clear read-out when screening for Dicty genes that seemed to offer a protective effect against CSE. Utilizing a cDNA library to screen over 30,000 transformants led them to two genes, one involved in changes in the cell’s skeleton, Aip1, the other, AncA, in the mitochondria, the cell’s energy factories. The ancA gene has prominent paralogs in humans, the ANT genes. Reintroducing the two genes confirmed protection in Dicty against CSE. Turning to a lab culture of human bronchial epithelial cells (HBEKTs) that line the lung’s airways, the researchers saw that both the ANT gene family and Aip1 protect the cells against cell death from CSE. Insulted by CSE, the HBEKTs tried to fight back by raising the ANT1 gene output. By turning up the expression of ANT2 genes, the researchers ramped up the counterattack against CSE, resulting in visibly strengthened HBEKT cells.

The humble amoeba, Dicty, has opened a new path, say Kliment et al., to understand the mechanism by which human airway cells protect themselves against cigarette smoke. New pathways, new targets, and new treatments are all badly needed against this so far intractable killer, COPD.